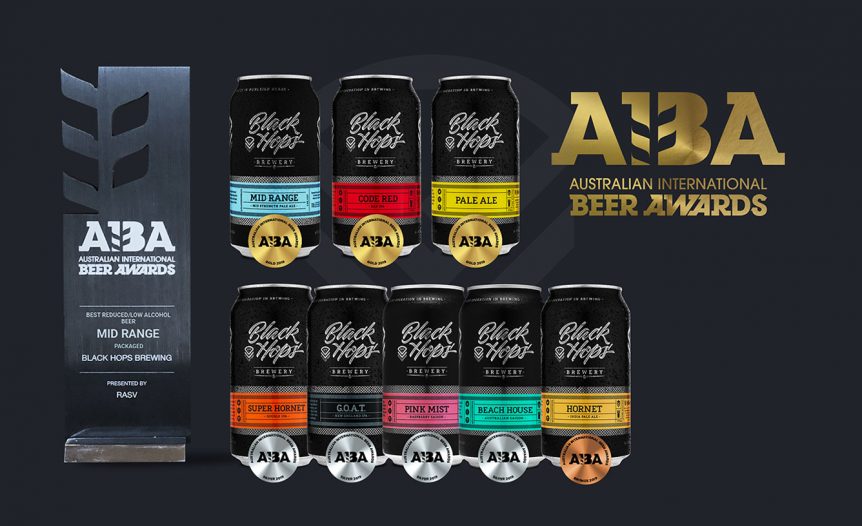 On Thursday 16 May we joined our craft beer industry friends at the annual Australian International Beer Awards (AIBA’s). We have attended the awards for the last 4 years thanks to our generous partners Cryer Malt and HopCo who have given us seats at their tables. This year it was a real thrill for the founders to take the brew crew down with us.

The AIBA’s have been going for over 25 years and is the largest annual draft and packaged beer competition in the world. When we first attended we were just happy to be there but we did pick up some bronze and silver medals. Last year was amazing for us at the awards picking up 5 gold medals, a champion trophy for Beach House and the Champion Small Brewery award. This year was also a great year for us and our fellow Queensland brewers.

This year we also had the added thrill of participating in the AIBA Champions collaboration beer as a result of taking out Champion Small Brewery last year. The beer which was presented on the night was a Gose spiced with the tropical fruit Achacha.

Here’s Govs alongside the other 2018 champions and beer collaborators Sam from Philter, Johann from Green Beacon & Ian from Mountain Goat followed by the video presented on the night.

We were also very happy with our award results on the night. We were awarded 1 Bronze Medal, 4 Silver medals, 3 Gold Medals and a Champion Beer Trophy for Mid Range. We were not the only local breweries to have a strong showing with Green Beacon picking up an overall champion brewery trophy for the 3rd straight year and Balter doing the same making it 2 out of 3 years for them.

It’s sometimes hard to understand all the medals and trophies and what they mean. Medals are awarded if beers meet certain scores, so in each category there could be multiple bronzes, silvers and gold. There is only one trophy per category which is awarded to the highest gold medal scoring beer.

From our point of view getting any medal at the AIBAs is a great achievement for a brewery. Brewing beer to style is a show of quality and consistency and we love the opportunity to submit our beers to the beer judges each year.

Receiving gold medals is a huge thrill and winning a beer trophy for our second year running is a rare honour.

This year also saw an incredible result for other Queensland breweries. Many breweries got bronze and silver medals and no less than 12 were awarded Gold medals and of course Balter and Green Beacon taking out overall champion brewery trophies.

Queensland beer is in great shape and we are proud to be part of it.

Here is a list of all the other Queensland gold medal winners:

Cheers to all the medal and trophy winners this year.