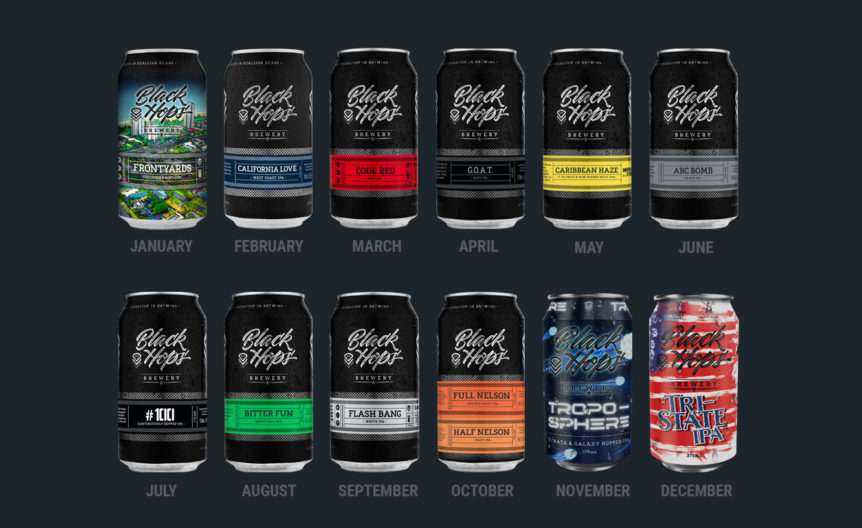 At the start of 2019 we committed to doing a limited release for bars and bottle shops in every month of the year. Previously we’d done quarterly releases and a few one-offs but we wanted to make them more consistent and have something unique to give drinkers for every month.

We’ve just released our December limited so we’re pleased to say we were able to release 12 different limited releases this year. From the refreshing world of Sours through to our ever-popular seasonal IPA range, a few hazy’s and a milestone brew in honour of our 100th unique creation, we’d like to think that we were able to cover off the styles of beer that most people wanted from us.

In this post we’ll count down our 12 releases for the year. If you’d like us to bring any back for 2020, hit us up on social media and let us know!

What goes into choosing a Limited Release beer?

This is always a bit of a tricky one to answer. Some of these beers started out as our very first handful of pilot brews back before we even had a brewery, Code Red for example. Others came about through partnerships with other companies like Tri State, Caribbean Haze etc. Others were just beer styles we thought we would do well and were what the punters wanted.

In the spirit of ‘The 12 Days of Christmas’, here’s a wrap up of the ‘12 Months of Black Hops Limited Release Beers‘.

Let’s start in the front yard, with our Sour January special, Frontyards. Made in our front yard, to be enjoyed in yours, Frontyards is our modern interpretation of the classic German Gose style. With a saltiness achieved through the use of actual sea water from the beach out the front of Black Hops at North Burleigh (Frontyards), a lemon tartness of the Gose style and a refreshing mix of cucumber and mint, Frontyards quickly became our ultimate sour smasher.

People liked this beer so much we ended up introducing a seasonal range of sours and we kicked it off with Frontyards as the Spring Sour release.

Bursting with the aroma of citrus fruits and pine, our February limited release was inspired by our founders’ trip down the West Coast of the USA. A subtle malt body and dry finish let the classic West Coast hop flavours take centre stage. We were definitely feelin’ the February Cali-love with this one.

We brewed this one because it was the kind of beer we wanted to drink and represented a bit of a departure from the more sweeter hazy’s going around at the start of 2019.

Long time Black Hops drinkers would know all about this big-big fave from its days as our Autumn seasonal IPA, and even one of the first pilot batches we ever did back in the home brew days.

Code Red is a classic American Red Ale, boasting a rich toffee malt body and a luscious ruby colour with minimal yeast character, providing a clean finish and allowing the Simcoe, Citra and Mosaic hops to shine through.

“Code Red For Core Range” has been a familiar chant at the Black Hops taprooms but we prefer to keep it special by doing it once a year.

Originally brewed as a small batch exclusively for the 2018 AIBA Awards (when the hazy category was introduced for the first year), G.O.A.T. was brewed with high expectations and named accordingly. The beer took out a Gold Medal and went on to become a favourite among Black Hops drinkers.

This juice bomb features the signature opaque appearance of the Hazy style, paired with an explosion of tropical fruit flavours thanks to the generous late addition of Mosaic, Amarillo and El Dorado hops.

Maintaining the haze in May, Caribbean Haze was brewed in collaboration with Mount Gay Rum for the 2019 Great Australasian Beer Spectapular (GABS). This Caribbean-inspired hazy Double American IPA was spiced with citrus, pineapple, mango and coconut-infused Mt Gay Black Barrel Rum, to give this already aromatic style a fresh Caribbean twist.

We always love doing a fun beer for GABS, and after the success of our Caribbean Crusher single Hazy IPA the year before, we thought it was worth a crack at a double version. The beer was well received at GABS, and we ended up brewing it twice to make sure we could get a fresh version our in cans after GABS.

Another of our original seasonal IPA’s, this hoppy Black Ale detonated into Winter, balanced by a strong citrus and pine hop aroma and a distinct roasty dark malt character. The use of American hops gives this beer a genuine IPA backbone with a unique spice flavour through the addition of rye.

Fun fact, when Black Hops was first starting out, the founders borrowed the saying ‘Always Be Closing’ and wanted to immortalise it into a beer, hence the ABC Bomb.

To celebrate the 100th unique beer brewed by Black Hops, #100 is a continuously hopped American IPA crafted in the tradition of Dogfish Head’s famous 90 minute IPA. 100 minutes of continual hopping in the boil by the whole Black Hops crew, delivered a classic IPA with all American hop complexity.

In 2015 we brewed what was intended to be Black Hops’ original Pale Ale. After accidentally hopping it twice, we released it under the new name of Bitter Fun and it grew into a crowd favourite. This 2019 limited re-release amped up the ABV and the Aussie hops to make one of our old favourites, even more fun.

We didn’t do another Pale Ale until May of 2017 when we released our first beer into Cans. Since the beer was a totally different recipe to Bitter Fun, we just named it Pale Ale – nice and simple.

Our September limited release was an American Wheat IPA that mixed up the hop-character and brewing techniques of an India Pale Ale with the wheat base and spice additions of the refreshing Belgian Witbier. Light bodied with big citrus and pine aromas, and a smooth finish.

One of our original 4 seasonal IPAs, Flash Bang is always well received.

The crowd favourites from our single hop-focused hazy project, our Half and Full Nelson Hazy IPAs exploded with fruity characters of freshly crushed gooseberries and passionfruit, unique to Nelson Sauvin hops. A bittersweet balance of hop flavour and smooth malt mouthfeel was achieved through clever water chemistry adjustments and the incorporation of protein-rich malts, signature to the Hazy IPA style. This mixed haze-craze came out blazing with the 5.7% Half Nelson, followed by the 7.4% Full Nelson counter attack!

We thought it would be fun to do our first mixed 16 pack and it went nuts. This was probably the fastest of our limited releases to sell out and the first to really move well in a 16 pack box.

Our November limited release IPA rocketed into orbit and headed for the stars with an astronomical aroma of citrus, berries, passionfruit and pineapple from the multiple additions of fresh Galaxy and Strata hops, balanced with a soft malt re-entry, and a clean, dry landing.

This one came about after the founders had a few beers hopped with Strata on their travels in 2019 and knew we had to get hold of some. When Govs was in the US for the Hop Harvest he secured some and the rest is history. One of the standouts for the year in terms of how well received the beer was, after selling out in the taproom in just 4 days. It was also our first beer into full sleeve labels which we liked for something different.

During a recent trip to the heart of the Pacific Northwest and the home of great hops, Black Hops Brewmaster Govs was inspired to brew a beer that would encapsulate the quality and diversity of ingredients from the region. He selected his favourite hops and malts from Washington, Oregon and Idaho to bring together the flavours of a truly American IPA.

Tri-State IPA took our 2019 limited release road trip to the centre of the craft brewing revolution, from the rugged Sawtooth Mountains to the sunset shadows of the Cascade Range with a delightful blend of biscuit malt flavour and pure tropical, citrus and pine hop aromas.

Our last limited release of the year was another well received IPA and was also a smaller batch than normal so didn’t hang around too long either.

In 2020 we’re also aiming to release 12 limited releases, again mixing some old favourites with whatever new ideas come to us throughout the year. Cheers if you enjoyed one of our limited release beers in 2019.