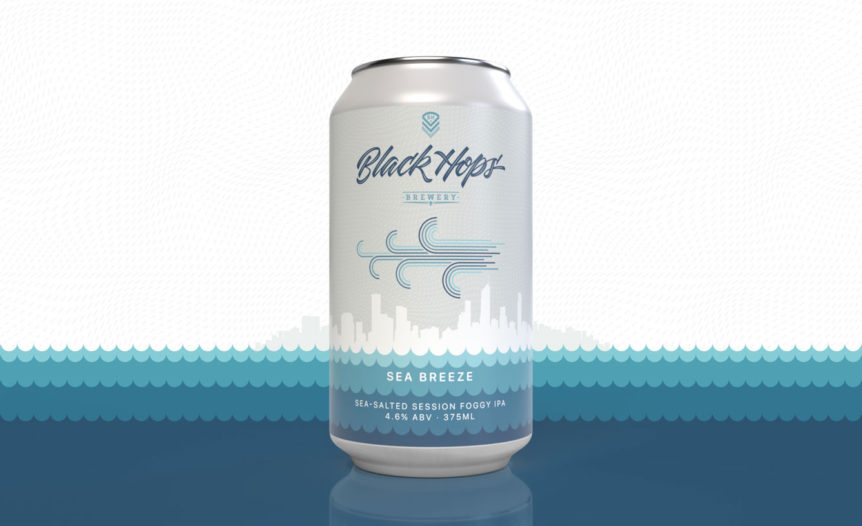 “How do you come up with beer ideas?” This is by far the most common question we get asked, and to be honest we haven’t done the best job at answering it. We put a few points in our article on Recon Series Beers, and we’ve written articles on how we go about designing beer cans, but we thought it would be fun to really dig into some specific beers we’ve brewed and how the ideas originated and grew into a finished product.

The truth is we don’t really have a process for creating new beers. In the early days Eddie had a few ideas that he pitched to Govs and they made the beer. There wasn’t much more to it.

But these days we are always on the lookout for beer ideas, plus we have a lot of inputs that automatically come in which tend to lead to beer ideas on their own or in combination with other inputs.

Here are a few examples.

This may be one of the more surprising inputs to coming up with a beer, but a good design will sometimes be enough to trigger a conversation around making a beer. Here are some examples.

One of our designers Dave Heavyside from Maake is regularly sending me through ideas for beers we could potentially make, especially once he realised that if we like the ideas, quite often we go ahead and make them! Here’s one of our first conversations like this:

After a bit of back and forth and discussion with Eddie and Govs we had brainstormed a concept for the beer, a lower ABV Hazy Pale Ale and decided to release it as our 2020 Crafted Festival Beer.

Unfortunately, the September Crafted event was cancelled, but the beer was already underway. Plus we loved the concept and the design, so we were happy to send it.

It’s not that unusual for us to release a beer simply because we fall in love with a name, even if we don’t have a concept for a beer (that can come later).

Lots of our beers have come by choosing a name first. Here are a few examples:

A few weeks leading up to the biggest beer festival of the year (GABS), we had a post in the Black Hops Ambassador Facebook Group about how some of our audience might put forward a beer idea. We replied and said, do it here and now, what’s on your mind? Marc, from our group, posted this:

“A hazy nitro IPA with pineapple and coconut in the tradition of a Pina Colada.”

We loved the idea and joked that this could become our festival beer that year.

As it turned out, the festival was canceled a few weeks later due to the COVID-19 pandemic, and the thread died off. But we decided it would be a great idea to make the beer anyway, and we made it secretly and released it despite no festival happening.

With a team of currently 37 FTE’s we are never short of ideas from staff, and it doesn’t necessarily have to be the brewing staff (although of course it is more often than not). We do our staff anniversary beers (more below), and sales staff are often suggesting collab ideas, but there’s also room for random beer ideas from any of our team.

We have a beer ideas channel set up in Slack for anyone to suggest beers for us to make.

Acid Wave is a beer we just brewed for this year’s Weekend of Tartness with Milton’s Scratch Bar. It came about through our Brisbane Sales Rep Niall’s post to Eddie, Govs and Mick on the company Slack channel.

We also get plenty of ideas from customers. Our newest core range beer, releasing next week, Tropic Like It’s Hot, was originally an idea from one of our longest standing customers and friends Jo. She pitched the idea of a ginger, lemongrass and pineapple sour to Govs and we all loved it. We brewed it in a really small batch and it went really well. When it came time to choosing our most likely candidate for our full time sour, Tropic was our choice. The design has changed a bit but the recipe is the same.

We also do beers for our original investors and have done quite a few over the years (we have a lot of investors). While founding investor Simpo is regularly encouraging us to add his Bacon Butty IPA to the core range, it’s Cream Cloud that stands out as one of the more successful investor beer ideas.

It’s common for us to come up with new beer ideas off the back of new ingredients that we discover. The latest hops, or specialty grains, hop extract products, or seasonal fruits are just a few examples.

A new hop extract that provided strong grapefruit flavours refined directly from hops had Eddie & Govs excited after spending hours zesting grapefruits in the past when we’ve done grapefruit beers. So they said yes to 18,000L of a Grapefruit Double IPA we called Neverland (originally a staff beer idea from BHII Taproom Supervisor Jesse).

There are lots of events that happen that are a great excuse to make a beer.

Festivals are always a great excuse to bring out a specific beer. The GABS festival each year gets us excited to brew fun beers and re-release our old GABS brews. But even festivals that don’t require custom brews are enough to get us coming up with something special.

At last year’s Crafted Beer and Cider Festival on the Gold Coast we brewed a collab beer with headline act The Delta Riggs. It was a fun project, a cool looking can and one of the best-selling beers at the event.

This year we don’t have a band collaboration but we do have a fun twist on a beachside festival beer, Sea Breeze, a Sea-Salted Session Foggy IPA (Toshi came up with that style descriptor haha).

After 1 year of service our staff members are given the chance to have their very own custom beer. These have been a lot of fun to do and we continue to do it for our ever-growing team.

Normally the staff member has some idea of what they want, and then work with Govs on the recipe and brew and me (and the designer) on the design of the can. The next one to come out is being released this Saturday for Taproom manager Cayle.

In August we got an email out of the blue from Nate at Bissell Maple Farm in Jefferson Ohio, who make a bourbon barrel-aged maple syrup. He said he liked Black Hops and wanted to work with us in some way so he would send us some of his product.

We didn’t think too much of it but as Halloween approached, we received the maple syrup in the mail and at the same time new BH Chair Force member Reanna (who’d only been with us for 2 weeks) suggested a spiced pumpkin ale for Halloween, using the Maple Syrup, among other things.

Govs loved the idea and we released Pumpkin Spice & Everything Nice as our first Halloween beer. It was a very fast seller at the taproom and a fun event to release a beer around.

Sometimes it makes sense to group beer releases into a series of sorts. Again these tend to come about organically via a range of different inputs.

Hop Man was a character that our designer Troy from Troy Designs included in one of our limited releases, Moondancer. People in our Facebook Ambassadors group fell in love with the character and started asking for shirts and stickers and more. Based on that, we decided to release a series of beers featuring the same hop bill as Moondancer and based around the Hop Man character.

For our Brisbane launch, we released Hop Man Returns and Hop Man Party shirts. We even have a Hop Man poster on the wall at Black Hops Brisbane, because why not?

Next week we are releasing Hop Man’s swan song, Hop Man Out.

Back in August we released 3 series in a grouping called Cloud Series. This idea began in a similar way to East Coast Low, I had a conversation with Dave about some design concepts he was working on. He’d found a mobile app that made fun cloud formations and thought it would look cool on a beer label. He had a few different designs and wondered if we could somehow do a cloud series release.

We had previously brewed a beer with one of our early staff members Spencer Cloud called Thunder Cloud, and we’d also just released Cream Cloud and it had gone very well. Niall came up with a new idea for a sour hazy called Acid Cloud, and that was 3 solid beers forming the Cloud Series release.

Collabs can be great but can also be a lot of work. When they work well they work really well and even when they are hard, sometimes they produce some great results. Most breweries don’t need much of an excuse to brew a beer, and the opportunity to hang out with a bunch of mates, share ideas and make beer is as good as any.

HopBro Super Choice is our latest collab with HopCo, Revel and Currumbin Valley Brewing. Discussions for the beer started on a trip to the Hop Harvest in New Zealand in March this year. Revel looked after the recipe and brewing at their new site at Riverside in Brisbane, and we looked after the design of the can.

Our next collab came out last night, and it’s with Brewdog’s Dogtap Brisbane for their Collabfest. The Dogtap team came down and worked with Niall, Eddie and Govs on the recipe. We looked after the design of the decal.

Ideas that have not yet made it

Here are some we are keen on that haven’t quite come to fruition yet. Rather than let them die, I figured I’d post them here for fun.

We have a few labels back from designers that we liked but haven’t found a use for yet. Here are a few from Dave.

Dave thought this concept would be fun so he just made it one night. We agree it would be fun but don’t really know where to start with collaborating with Australia post haha!

This was one of the design concepts for Tropic Like It’s Hot. It didn’t suit the beer but the design is fun. We might use this for another beer down the track if we can find the right beer. Can you think of one? Let me know in the comments below!

Another banger from Dave, might send one day! If you watch Ozark you should get the reference.

There are always beer names floating around, here’s one we are currently discussing.

Got any beer ideas?

Add them in the comments below you never know we might give it a go!