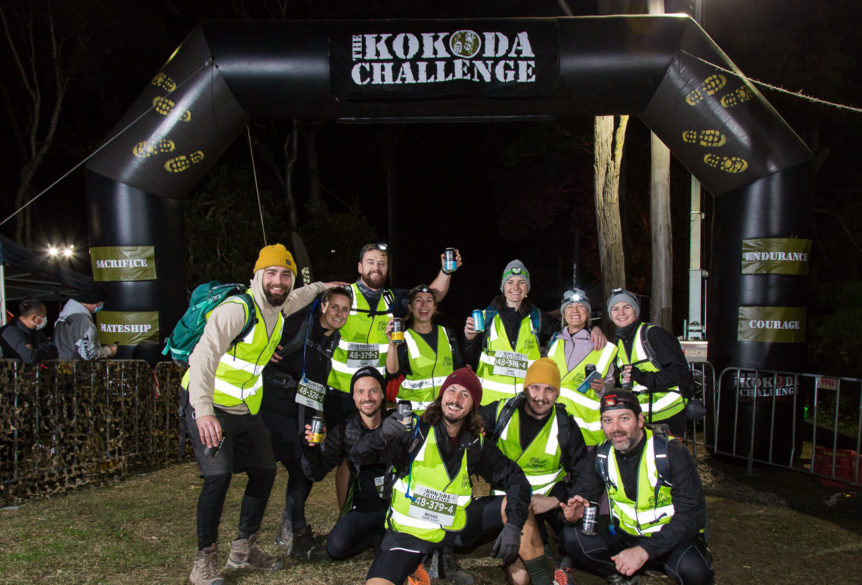 On Saturday, 17 July eleven fearless Black Hops foot soldiers accepted the daunting mission of completing the Kokoda Challenge, taking on a 48 kilometre test of endurance and resilience across 15 hours through the Gold Coast hinterland.

The event is held annually to honour the Australian diggers who fought in 1942 along the arduous Kokoda Track in Papua New Guinea during World War II. The spirit of these original Kokoda warriors, personified through the virtues of courage, endurance, mateship and sacrifice, is called upon by those brave enough to tackle the physical and mental demands of completing the challenge.

As well as honouring the legacy of the original Kokoda Trail-blazers, the Challenge also serves as a vital fundraising tool for the Kokoda Youth Foundation (KYF). A local charity whose mission is to change lives through the spirit of Kokoda, it was established in 2004 by Doug and Anna Henderson, with all challenge participants raising funds for kids who participate in youth programs that the KYF run throughout the year.

Getting a Black Hops Crew Together to Take on the Challenge

Earlier this year two of our BH crew, Chelsea and Duane, hit up team Black Hops to recruit some willing conscripts to the Kokoda cause. Alas, Duane was unable to participate on the day of the challenge due to family commitments, but Chelsea was able to pull together a hardy battalion of eleven to take on the course. As well as herself there was Kirsty, Stu, Biff, Railo, Erin, Dom, Sara, Eddie, Rick and Mark.

At 11:00am on the morning of Saturday, 17 July the team met up at the starting point (Checkpoint Six) to begin their gruelling 48 kilometre trek. It was a fine, clear winters day as the team set out on the course, incorporating rugged and hilly terrain winding through the Mudgeeraba and Nerang hinterland.

As an interesting aside, while the effort of team Black Hops was epic, there were also some herculean participants who concurrently took on a course twice as long! This 96km course is officially known as Australia’s toughest endurance event.

“The people doing the 96km come past you because our 48km is their second 48km and they started a while before us. It was amazing to see them running when you knew they’d already done 80km of some pretty incredible inclines” (Railo)

Along the way there were 8 checkpoints to reach, and the entire team had to cross the checkpoint scanners within a minute of each other or else they’d be disqualified.

With everyone operating at a different level of fitness and physical/mental reserves, the way that the crew tackled the course varied. For super-fit guys like Eddie and Rick it sometimes appeared to be little more than a stroll in the park.

“Ed and Rick were the energiser bunnies of the group. We couldn’t keep up with them as much as we tried but they were always giving us a big boost when we met them at the checkpoints.” (Railo)

While for some others it was literally the most exhausting and challenging thing they’d ever undertaken.

“There were two big inclines that you could see on the incline map and both of them sucked big time! I honestly didn’t know we had terrain that was so steep in the Gold Coast hinterland. However hard I thought it was going to be, it was a lot harder when we hit those inclines. I have to give props to Dom because her knees were giving her real grief before we even got to halfway and she kept going without any complaints. I know for a fact I whinged more than she did and I had no injuries. I did my best to keep the mood light but when my energy ran out it dried up pretty quickly haha.” (Railo)

At around 7pm and 30 kilometres later our trekkers reached Checkpoint 11, some eight hours after they’d set out and with eighteen kilometres of night terrain still to come. There they were met by an amazing Black Hops support crew of Wowzy, Samm and Cayle, who as well as providing moral support and laughs also brought along dinner, milo (and a couple of cheeky beers).

“Our support crew were great, the vibes at dinner were the best and the food amazing, I think we all could have settled in and got into full on camp mode.” (Eddie)

“One funny moment for me was when Cayle saw the amount of bananas I bought along for the trek and said – who are we feeding, Donkey Kong!?” (Kirsty)

“Seeing the support crew at 30km was like walking up to the gates of heaven. Honestly, it was better than finishing because I didn’t have enough energy at the end to be excited. Plus they put on such a spread, it was great.” (Railo)

Following this pit stop our trekkers rallied together for the final frontier and everyone made it over the finish line united as one, some 15 hours later, at 2:00am on Sunday morning in the chilly darkness.

For their efforts the team managed to raise $3,800 for the Kokoda Youth Foundation charity. There were plenty of delirious minds and sore bodies at the end of the trek (and in the days afterwards). But the sense of camaraderie and satisfaction in completing the course was a source of great reward, honouring the courage and endurance of the original Kokoda warriors.

“I got to know the team a hell of a lot more than I ever could have without doing Kokoda together. You cover off so many topics while you’re trying to distract each other from the task. There’s just no bullshitting when you’re out of breath and you’re that tired. One thing that rattled around in my head the entire time was that the soldiers who did the real trek didn’t have all of the luxuries we had. The terrain we covered was a hell of a lot easier. And we only did the 48km. I try to put it through that scope to motivate myself to continue to get more fit because the 48km still really messed me up.” (Railo)

“I loved every minute of it – lots of great laughs between an epic crew of people. The course was pretty amazing. My favourite part was when we climbed a very steep hill which opened up onto a lush rolling green property atop a very very windy Beechmont. We all regrouped and posed for a photo which included views of the entire Gold Coast.” (Eddie)

Brewing A Beer For The Occasion

A hard earned thirst deserves a great beer, so we brewed a limited run 4.5% Session Stout called Trail Mix to reward our intrepid team for their efforts in completing the challenge.

So cheers to an epic achievement, as we are reminded that when we work together, look out for each other, and show commitment to a task, things that at first seem impossible, suddenly become achievable.