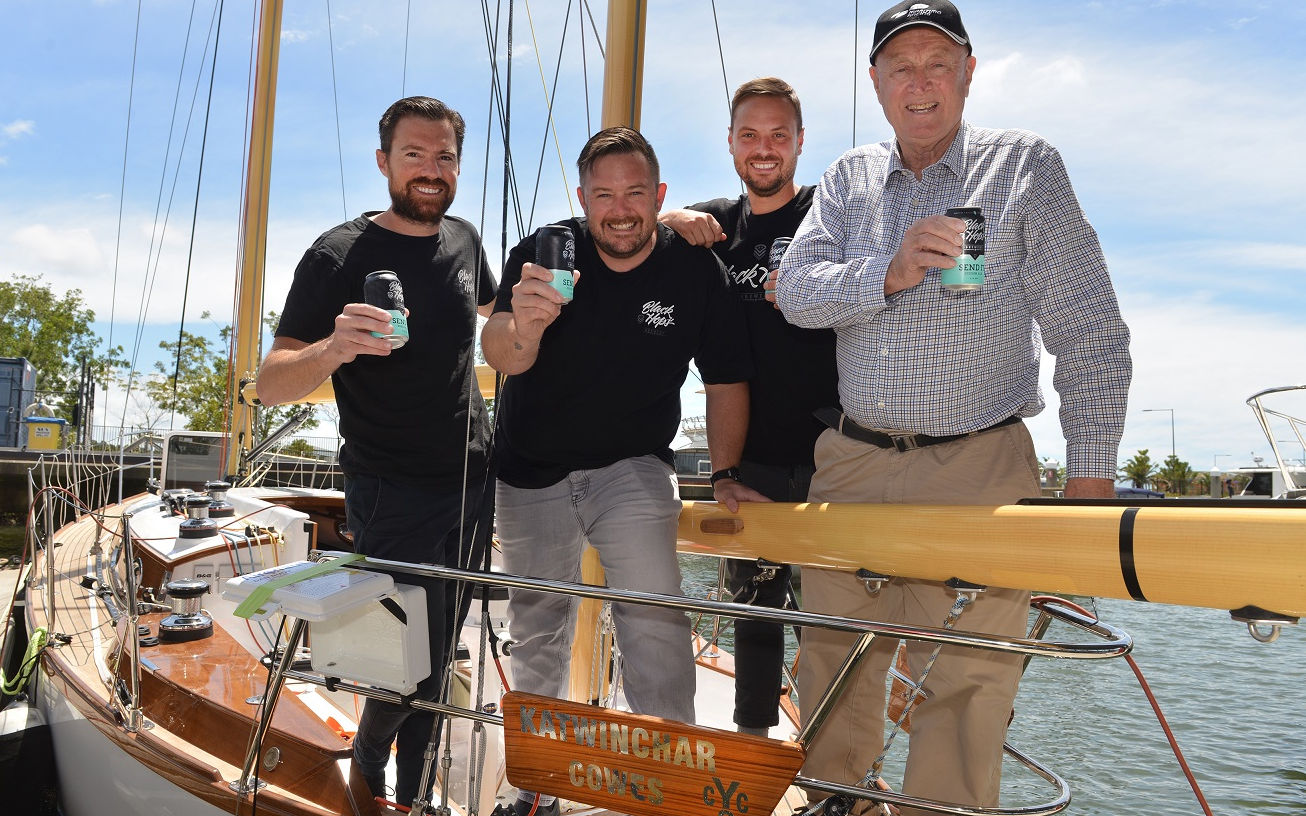 The Sydney to Hobart yacht race is one of the most iconic events of the Aussie summer sporting calendar. This year sees the event celebrating its 75 year milestone, with up to 100 boats competing over the 1000 km journey, acknowledged as one of the most challenging yacht races in the world.

And this year, we’re pumped to announce that Black Hops will be part of the race action, with our logo to be hoisted up high and flapping in the breeze on the sails of a vintage, reconditioned yacht that first sailed in the race almost 70 years ago!

And there’s a bit of a tale to be told as to how this opportunity came about..

Earlier this year we opened the doors to our second, much larger brewery, at Biggera Waters on the Northern end of the Gold Coast. The sprawling factory space we chose was previously home to the landmark Riviera Boat Sheds. Our landlord, Bill Barry-Cotter, is one of Australia’s most respected luxury boat builders, who since the 1960’s has founded world renowned boat manufacturing companies, Mariner, Riviera and now Maritimo.

Recently Bill got in touch to pitch us an idea. And as we’re ideas kinda blokes, Govs, Eddie and myself headed over to find out what he had in mind. Bill filled us in on the background to his proposal, and exactly why he approached us..

It turns out that as well as being a world renowned boat builder, Bill, together with his brother Kendall, are also pretty handy sailors, who’d previously raced in the Sydney To Hobart in 1975, later winning Division C of the event. This year Bill and his brother have once again put a racing team together and are heading back out to compete in the iconic race. With sail ‘real estate’ on offer, Bill was wondering if we’d be interested in having the Black Hops logo on the spinnaker (large triangular sail), as one of the major sponsors.

Bill then started recounting the tale of exactly how this particular boat came to be in his possession, as well as the story behind it. It turns out that back in the 1960’s, Bill’s father and and a few of his mates found an old sailing boat by the name of ‘Katwinchar’ in Hobart and sailed her back to Sydney.

For many years afterwards the whereabouts of the ‘Katwinchar’ remained unknown, with Bill searching for over ten years in vain to relocate the vessel. That was until two years ago, when it was fortuitously rediscovered by one of Bill’s friends via an ad on Gumtree, turning up in a widow’s backyard in Newcastle. Her late husband had started restoring the boat, so when Bill promised that he would continue to honour its original legacy and return it to its former glory, the widow readily agreed to pass the boat back to him.

The ‘Katwinchar’ arrived at Bill’s Hope Island marina on 12 December 2017. Since that time, a team of three full time staff and a host of contractors have spent over 10,000 hours bringing the boat back to life over the past 18 months.

And this is where the back-story gets really serendipitous..it turns out that the original boat was actually built in England in the early 1900’s before setting sail all the way to Australia. But wait, the story gets weirder – it was originally built by the coopers at the famous Watney’s Brewery in the UK! Launched in the year 1905, the 32 foot ketch was christened ‘Katwinchar’ in honour of the three Watney children, Katherine, Winifred and Charles.

In 1951 a migrating family, the Mossops, sailed the ‘Katwinchar’ all the way to Australia, where she arrived just in time to compete in the 1951 Sydney to Hobart yacht race.

We were pretty floored to hear the full story of the boats history. And seeing as the boat was originally built at a brewery, Bill thought it would be totally appropriate for his current tenants and brewery owners, to be involved in some way with the revamped Katwinchar’s maiden revival voyage. Needless to say, we jumped at the opportunity.

A few weeks ago, ‘Katwinchar’ set sail for Sydney in preparation for the big race, where she will compete in a few lead up races prior to the commencement of the 75th annual Sydney To Hobart, on 26 December. Here she will be commandeered by a crew of six, including skipper Michael Spies and the Barry-Cotter brothers, Bill and Kendall, setting sail from the CYC at Rushcutters Bay, on the way to Constitution Bay in Hobart.

As to how she will fare in the great race, as well as being the oldest boat in the field (at the grand old age of 114 years!), she’s also the smallest. But with all the work that the dedicated restoration crew have invested in getting her ‘race fit’, the boats speed and design will give her a fighting chance, keeping in mind that it’s a handicapped race where vessel size and dimension are factored in when it comes to declaring the overall winner.

We’re also brewing a special beer for the event, a pale ale called KatWinChar (of course!), that we’ll be giving to the thirsty crew when they cross the finish line, as well as putting on tap in a few venues.

We’ll all be eagerly following the event, looking to catch a glimpse of the Black Hops sails flying proudly in the breeze. I know that I’ll be getting goosebumps when I see it for the first time!

And as you can see by the photos, the boat’s a real beauty and at 114 years of age, is one of the oldest actively racing boats in the world.