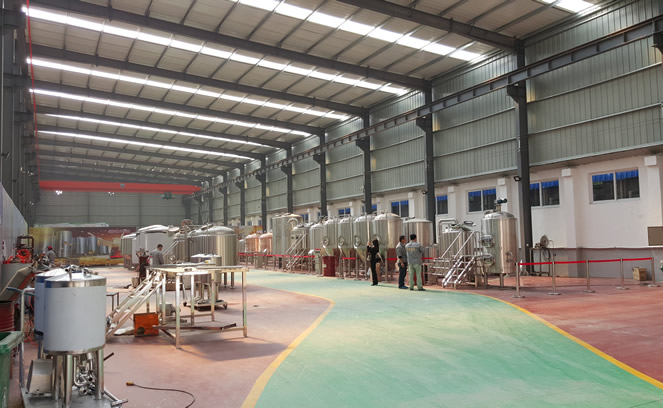 You can’t brew beer without brewing equipment. That’s a given. But where the hell do you find all the equipment you will need? We talked about our decision to go direct to Tiantai in Jinan (China) in Episode 2 of the Operation Brewery podcast.

After recently returning from China, here is a full report of how it went.

Throughout the whole process of deciding a supplier we were going back and forth constantly with Tiantai (and others). We originally contacted about 10 suppliers and out of the 10, Tiantai were the quickest to respond. Not only that, they provided a lot of detail on all components and showed a strong understanding of the brewing process.

A lot of manufactures, particularly in China, will make you whatever you ask for; a brewery, a washing machine, a 10tonne garbage disposer. It is important to deal with a company that knows what is critical to your specific processes, and Tiantai really seemed to get this. Govs spent the next 9 months emailing back and forth every few days, modifying the equipment design and improving the components that weren’t up to scratch.

He told them straight; we wanted a Chinese-built brewery to our specifications at a good price that would stand up against the best and in return, we would provide them with a growing demand of new breweries in Australia that we could recommend them to (with no financial reward).

We had the luxury of speaking with a few of Tiantai’s former customers who had been operating their equipment and they provided us with great feedback on things that could be improved. Tiantai were always willing to implement these improvements and many changes came from their own brewing engineers.

The main changes revolved around automation and electronic components, basically where we could, we removed them and replaced with manual controls. The theory behind this was; if a Chinese PLC controller broke down we would potentially be out of action for some time, however, if a butterfly valve broke – we could easily fix that ourselves or with the help of a local tradie. This added a lot of hands-on to the process but from all of Gov’s experience brewing craft beer, this is something he actually prefers (he backs himself to brew better beer than a computer).

The next big ticket items that are usually not very reliable from China were: Pumps, Electronics, Glycol Chillers and Boilers. We worked with Tiantai to find a better manufacturer for our pumps (one with stronger body and thicker seals), we replaced all the electronics with globally recognised brands such as LG, MEC and Siemens. The chillers were also upgraded to suit our hot Queensland summers and the steam boiler we chose to source locally in Australia (it is quite difficult to get compliance approval and spare parts in Australia on imported boilers).

A few little extra creature comforts were added such as; heavy duty stainless steel levelling pads for the tank legs, variable speed controllers for the pumps, bottom and side ports for separate transfers and draining, a fin inside the HLT to prevent whirl-pooling, rotating racking arms on the fermenters and a custom designed PDL bag filter unit and a manually controlled keg rinser.

Not only had this vigilant process greatly improved our brewery design but also the whole time we had been strongly negotiating on price and had come down about 15% below our initial quote. Now we were ready to order!

We submitted our purchase order, paid our deposit and quickly started making plans to inspect the equipment towards the end of production (about 80-90 days). We booked our flights and on day 75 we headed to China.

Our first stop was the port city of Qingdao (formally Tsingtao, you may have heard of the beer). We woke in the morning and did what all good brewers do, went searching for a craft brewery.

In China this can be very difficult to do, the Internet is very restricted and hardly anyone speaks English. Do yourself a favour and purchase a VPN before you leave Australia so you can access emails and social media in China (We went with Astrill) and no matter what your bank tells you before you go, take local currency (we had a few issues finding machines that accepted our cards), one particularly tricky little situation but that’s a story for another day.

Back to our brewery search, we lucked ourselves upon a local craft brewer called Strong Ale Works and after a failed attempt to get there in a taxi we called a number we found on a chat forum and to our surprise, John answered. John was the owner / head brewer and was an ex-pat American from Reno, Nevada, who had been in China for 12 years.

John welcomed us in and showed us around his brewery with the guidance of his Labrador puppy “Barley”.

Once we got talking to John we discovered he’d bought some of his equipment from Tiantai! It was about 18 months old, in great condition and making some pretty tasty beer. John gave us some advice on dealing with Chinese companies (basically if they say “no worries” you should start worrying and if they say “don’t go in that room” you should definitely go in that room), and then he showed us around town and helped us to the train station bound for our next stop, Jinan, where Tiantai resides.

When we reached Jinan, we were greeted by two representatives from Tiantai; Jana (who had been our contact for the past 6 months) and Ray (the General Manager / total legend). They took us out for dinner where we enjoyed some traditional Chinese cuisine (a few insect dishes were surprisingly delightful) and then dropped us at our hotel to retire for the night before the big inspection the next day.

After a massive Chinese breakfast, we were met at the lobby by Jana and Ray and taken to the Tiantai factory (about 30mins out of the city centre). This was the moment of truth.

We had communicated a lot and felt fairly confident it was going to be all good, but it was still a slightly shitscared sort of feeling actually going out to the factory and seeing OUR equipment!

“Holy shit!” was all we could manage to say. The factory was incredible, much like a well-oiled machinery shop back home. Clean, professional and very busy. There were tanks in all stages of production and they even had an onsite fully operational brewery used to test the efficiencies of their designs.

We were treated to a private tasting of Tiantai’s craft beer and were pleased to know that they were focussed on more than just making stainless steel tanks, they were passionate about making world class brewing equipment and this resonated with everything they did. We inspected our equipment and we were extremely happy with the quality and design.

The workmanship was not what you might expect from a Chinese manufacturer. While there are still a lot of cowboy operators making dodgy tanks, if you do your research and know what you are looking for, some Chinese companies are up there with the best in the world.

We spent several hours going over each item in our order and left specific instructions for a few items to ensure our satisfaction.

We also inspected the other items brought in from other suppliers such as the Mill, Heat Exchanger and Glycol Chillers. We took photos of all the items and the plates and where they didn’t have ours, we had a look at other similar items. One in particular took our eye. When we visited their head office to go through shipping and freight logistics, we realized we had a bit of room in one of the containers so we made good use of that (more on this later!).

Here are some pics from the day. We also have a public folder here that contains all of the images from the inspection. Feel free to have a look.

A car, 2 planes, 3 busses, a train and 14 hours later we were back on sovereign soil. It was a very eye-opening trip and something we would strongly recommend to anyone looking to purchase equipment from China.

Where to from here

We have asked for weekly updates from the factory until completion. We may return to see the good before they are shipped, depending on how happy we are with the communication and the images between now and when it’s ready.

We have a public folder here that contains all of the images from the inspection. Feel free to have a look.

If you have any questions about our equipment or china in general, please hit us up in the comments.