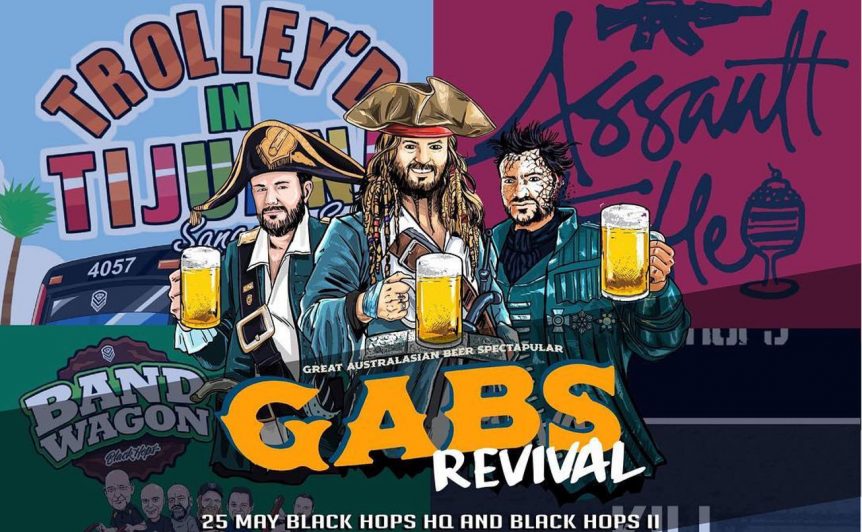 What do oysters, Aeroplane Jelly and sponge cake have in common? They are all great ingredients for beer! Well at least Gold Coast brewery Black Hops think so and are willing to prove it this Saturday 25 May.

The Great Australasian Beer SpecTAPular (GABS) is an annual festival (taking place in Brisbane, Melbourne and Sydney), for craft brewers from all over Australia to showcase one-off, creative beer recipes. It’s one of the biggest events on the Australian beer calendar. But if you can’t make it to GABS, Black Hops are serving up their GABS festival beers for the last 5 years this weekend.

Over the past five years Black Hops have maintained a proud tradition of showcasing one of their finest, limited run, creative beer recipes at the GABS festival. Some of these unique brews, such as 2016’s Assault Trifle, a Pale Ale infused with the flavours of the classic Aussie trifle dessert, placed in the top ten of the ‘People’s Choice’ Awards.

This year Black Hops have created another highly popular release for the festival, a hazy Double American IPA infused with coconut, mango and Black Barrel Mount Gay Rum known as Caribbean Haze. It has proved to be a popular choice at the festival, being one of a few to sell out.

But luckily Black Hops have kept some aside for their GABS Revival event and on top of that re-brewed and canned their last 4 years beers as well. This means this weekend, Saturday 25 May, you can enjoy any of the beers at either their Burleigh or Biggera Waters Taprooms and take some home as well.

The following GABS beers will be available on tap and in cans in limited quantities:

KILL PATRICK (2015)
A Stout first & foremost, with hints of smoked malts, and a touch of rye. This beer is brewed with fresh unshucked oysters and spiced with tamarind, clove, pepper and lemon zest.

ASSAULT TRIFLE (2016)
This bold, Trifle Pale Ale was one of only 2 Queensland beers to finish in the top 10 at GABS 2016. It’s brewed with all the important ingredients of a good trifle including Aeroplane Jelly, toasted coconut, flagons of cream sherry, Madagascan vanilla beans, lots of fruit and sponge cake.

TROLLEY’D IN TIJUANA (2018)
Black Hops’ bodacious adventure to Tijuana to source the spices for this Sangria Saison almost saw them stuck in Mexico. Fortunately, a little trolley journey kept them out of strife. Spiced with cinnamon, orange peel & star anise, it will have you doing the tango in no time.

We look forward to seeing you this weekend.

If you are interested in covering Black Hops there is more information up at our media page at https://blackhops.com.au/media