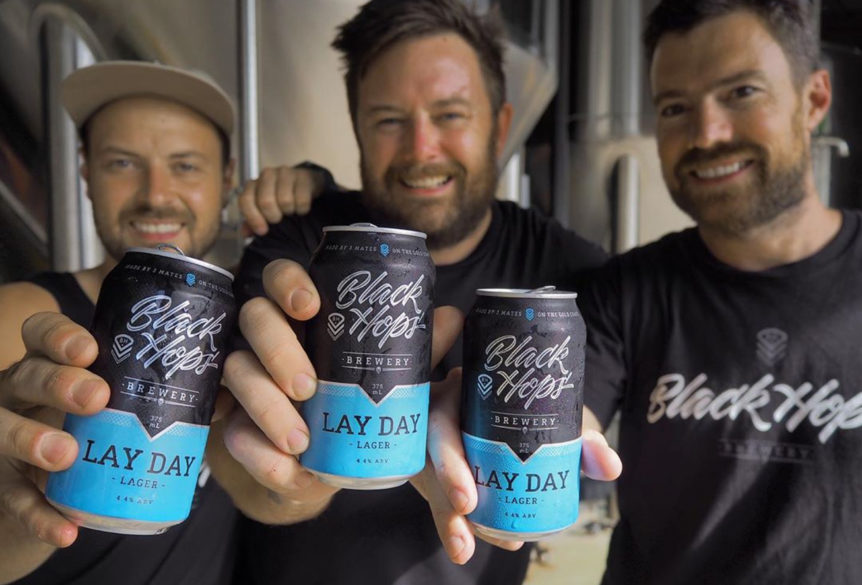 As part of an ongoing series of posts on the Black Hops Blog, we’ve gone into the nitty-gritty of how we brew particular styles of beer. So far we’ve talked about how we brew:

Now it’s time to get back to basics and talk about brewing so-called ‘classic’ beer styles, in particular Lagers. We’ll go into what defines a Lager, why it’s trickier to brew than an Ale, and drill down to the steps in brewing our Core Range Lay Day Lager. And we’ll also talk about what it takes to brew German style beers such as our recent Doppelbock, whose origins and brewing principles go back centuries.

How Are Lagers Different To ales?

In broad terms beers are typically classified as belonging to two major types – ales and lagers, under which sit a multitude of different styles.The difference between these two different beer types is all in the yeast.

Ales are brewed with top fermenting yeasts, meaning that these yeasts have cell walls that bind to co2 bubbles and float to the top. They are typically fermented at warmer temperatures and for a shorter amount of time than lagers.

Lagers are usually associated with crisp, clean flavours and lack the strong character and bite associated with an ale. This is partly due to the fact that esters and phenols, organic compounds that contribute to the aroma and flavor of many beer styles, are less pronounced in cooler fermenting environments. Esters typically deliver more desirable (fruity) flavours, while phenols (which includes things like tannin) can be associated with more ‘spicy’ flavours (or funky if left unchecked!).

Is it harder to brew a good Lager?

It’s often said that lagers, while a simpler style of beer, are actually more difficult to brew well. A wise man once said that to gauge the measure of a brewers true worth, try one of their Lagers. Why is this the case? There’s a few factors that come into play here ..

As lagers are more delicate and less intense than ales, minor faults tend to be more noticeable. And if things don’t go according to plan during the brewing process you can’t just add a bunch of extra hops into the tanks to smooth things over (aka ‘hop it out’), which can sometimes be the case with minor discrepancies when brewing ales such as IPA’s. A lager is quite simply the brewer in the headlights with their pants down. Very revealing.

Lagers are also harder to brew because they need very specific conditions to achieve their more delicate flavours. In comparison to ales, the brewing temperature needs to be cooler and monitored more precisely to ensure effective fermentation, without stressing the yeast by being too hot or too cold.

Lagers can take many weeks or even months to produce well, whereas an IPA finishes out in a week or two. They can also be less financially sound, as it is difficult to charge more for a product that contains less ingredients and does not typically excite customers, despite the extra time and monitoring required.

Although at the end of the day, ALL beers are challenging to make at a consistent standard of excellence. Brewing any style of beer incorporates many variables that can potentially be subject to issues no matter how good your quality control processes are. Brewing a complex beer such as an IPA consistently well is also a challenge, in that you need to integrate and harmonize the stronger hoppy flavours. And no amount of ‘hopping it out’ will cover up a brew riddled with diacetyl or a microbial infection.

Pilsners are a very specific type of Lager. To understand their relationship think of it like this: Pilsners are to Lagers like IPA’s are to Pale Ales – a more robust and intense version of the style. This all comes down to that flavoursome ingredient of the beer world known as hops, in particular the Noble Hops variety typically used with Pilsners.

Pilsners take their name from the Czech city of Pilsen (Plzen), where Bavarian brewer Josef Groll was called upon to lend his German Lager brewing expertise to counteract the mass dumping of 36 casks of contaminated ale in the 1800’s. Groll tapped into the areas uniquely ‘soft’ water supply (to enhance the delicate flavours of the grain) and utilised a generous helping of the local areas distinctive ‘Saaz’ Hops, a signature Noble Hops variety.

And so in 1842 the world’s first pale lager, the iconic Pilsner Urquell was born, defined by its pale gold colour, crisp flavour and more ‘bite’ (ie bitterness) than standard Lagers. The recipe has proved to be timeless, with the beer style ultimately adopting the name of this initial creation.

Over time, some breweries have tweaked these base ingredients and brewing methods as a cost cutting exercise, leading to beers of less flavour and aroma, which have been re-branded as ‘American Light.’

How We Brew Our Lay Day Lager

Part of our Core Range of beers, our 4.4% Lay Day Lager is perfect for those who enjoy a clean and crisp beer, brewed with Australian pale malted barley, lightly hopped and cool-fermented longer for a simply fresh finish.

Here’s what goes into it and how we brew it ..

(ppm) keeping it very low in minerals with a very soft profile..

18IBU of Dr Rudi at the beginning of the boil to attribute a delicate and clean bitterness without too much hop character.

We pitch at 12°C and raise to 15°C on day 7 of fermentation to start cleaning up any sulphur dioxide or VDK precursors.

We filter either using a charge-modified depth filter or through our centrifuge. We do not necessarily want the beer to be sterile, just have a wonderful brilliant clarity. We do not pasteurize our beers.

How We Brew Our Limited Release German Doppelbock

Having its origins in the Middle Ages beer epicentre of Germany, the Doppelbock style was crafted by settling Franciscan monks, brewers of Munich’s finest dark strong lagers. elanslating to “liquid bread” this beer is robust and sustaining, busy with aromas of raisins, brown sugar and sherry.

Here’s the recipe and process we follow when brewing our Doppelbock..

(ppm) following a more traditional Munich water profile, we are attempting to bring out more of the malt flavours with a higher chloride content..

Using these traditional Noble hops allows us to give the beer an authentic spicy and herbaceous character.

We pitch at 8°C and raise to 18°C on day 14 of fermentation, allowing more time for the lower pitch temperature. This lends itself to a cleaner fermentation.

We filter either using a charge-modified depth filter or through our centrifuge. We do not necessarily want the beer to be sterile, just have a wonderful brilliant clarity. We do not pasteurize our beers.

I hope this article was useful, if you want to discuss things like this in more depth, the best place is the Facebook Ambassador group.