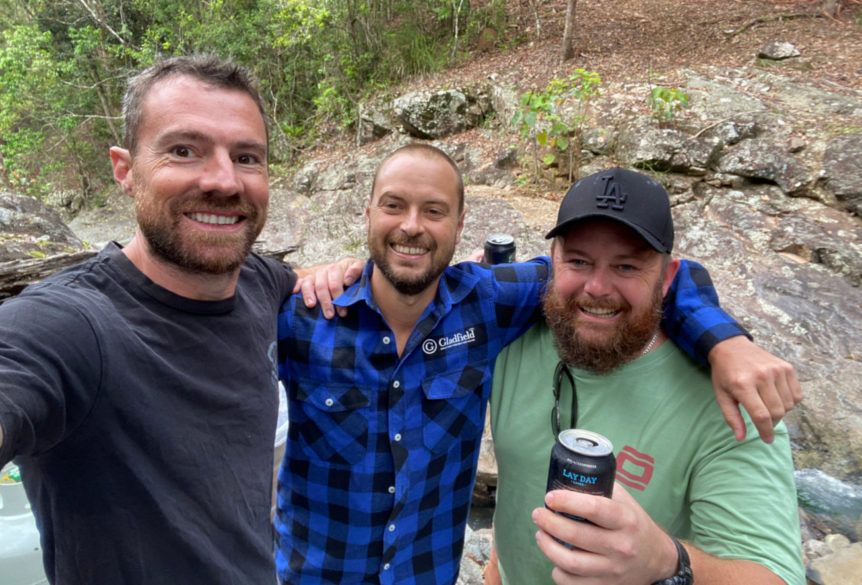 If you’ve followed our story recently you may know that Black Hops founders Govs, Eddie and myself recently went off the beaten track on an overnight, ‘not so covert’ mission to brew a wild fermented ale.

With the pending launch of our AWOL barrel aged beer brand and taproom, we wanted to tap into an ancient brewing technique known as spontaneous fermentation to create a unique, one-off barrel aged beer which we could savour in our new AWOL taproom in around nine months time. Basically we loosened the reins and let nature take its course, leaving the fermentation process in the lap of the beer gods.

In this post we’ll talk about the concept of spontaneous fermentation and step you through what we did to capture the wild yeast that we needed to inoculate our wild ale. It was a bit of an adventure, so read on ..

Fermentation is a stage of the brewing process where yeast converts carbohydrates in the wort to alcohol and CO2, which gives the finished beer its alcohol content and carbonation. In a regulated brewing process, this fermentation commences when cooled wort is transferred to a cooling vessel and a particular yeast strain, as chosen by the brewer, is added.

Yeast is found floating through the air and looking for something to ferment in any environment you can find – from suburban parks and gardens through to forests, creeks and fruit orchards. There’s lots of different kinds of yeast and only some of them are good at fermenting beer. Modern day brewing largely involves the controlled use of already-known strains of yeast during the fermentation process. The standard brewing yeasts of today originated from cultivated wild yeasts that became established over time as being great at fermenting alcohol in malted sugar mixes and producing flavours and aromas that are desirable. But it wasn’t always like this.

The concept of spontaneous fermentation goes back to how beer used to be made before yeast started being cultivated in a lab environment for commercial and health purposes. Before the times of Louis Pasteur (the godfather of fermentation and pasteurisation), brewers were not even aware of the existence of yeast and fermentation and the effects of alcohol were revered as divine magic.

In early brewing times brewers would inoculate their beer with whatever wild yeast flora happened to be floating in the air at the time of inoculation. Everything was ‘open fermented’ and went through this process of spontaneous fermentation, with certain breweries, particularly in Belgium with their signature Lambic style beer, becoming renowned for the strains of wild yeast that existed in their brewing environments.

All of our Black Hops beers to date have been brewed by adding a known strain of yeast, including our sours and beers aged in barrels in AWOL. That means there was a lot of spontaneity and an element of the unknown in the process that we followed to brew our first wild yeast ale. In fact we’d accepted that doing this brew in this way as our first attempt would most likely not work, but figured it would be a fun and educational thing to do in any case. It’s also a starting point to try more approaches in the future and we figured it was worth the time and effort spent to potentially capture some yeast that we can run with for future AWOL beers, with a cool story attached.

How We Captured Our Wild Yeast

Wild yeasts can give a range of flavour outcomes – some wonderful, some not so palatable and some just plain weird. So while there’s an element of risk involved, the reward of nailing an epic wild yeast brew became too hard to resist.

The plan was pretty simple – head out into the Gold Coast hinterland to a property on the banks of a feeder inlet to Tallebudgera Creek in Talle Valley, set up the original Black Hops brew kit and let whatever wild yeast and bacteria that was in the air do its thing.

Getting well away from the city means that it’s less likely for the air to be tainted with airborne contaminants and pollutants which can compromise the spontaneous fermentation process. So while it’s still somewhat luck of the draw as to what type of wild yeast ends up in your beer, it’s much more likely that you won’t have to tip it down the drain at the end of the process.

We drove out the back roads of Tallebudgera then out along a goat track to the final location. Driving out there together it occurred to us that we hadn’t done a brew together as just the three of us in a very long time, so it felt like a bit of a pilgrimage in getting back to our roots.

The cars could get as close as the home onsite, but the electric Polaris was needed to transport us to the creek bed. Then we had to physically carry the brewing kit and equipment as well as a supply of water (we did use a bit of the creek water but not much) for the last 100 or so metres down to the creek. As we set ourselves up, we realised that we had no phone reception and little to no light once it got dark .. and we’d need to be there until the wee hours .. too late to turn back now though!

The Brewing Process Down By The Creek

Once we got our pilot kit set up down by the creek we got into the nitty-gritty of the brewing process, chilling the wort and transferring it to open vessels in the creek (behind fly screen to keep out insects and frogs). It was kind of like our version of Coolship brewing – coolships are broad, open top flat brewing vessels which serve as a giant pool to let whatever wild yeast and bacteria floating through the air at the time innocolate and ferment the beer.

You don’t know what sort of yeast you’ll be getting at any specific location in the wild, and every day could potentially produce a different result – there’s just so many of them in the air at any one time.

We ended up brewing three batches of the wild fermented ale on our pilot 50 litre system to get us up to the yield we were after.

The next morning we awoke to discover that Eddie had already cleaned up the brew site, so all that was left was to transfer the beer out of the open containers into plastic tubs for transporting it back to the brewery.

We connected a hose to the open fermenters and sent the beer downstream to the containers to gravity fill them ready for transportation. In the end we were able to get 120L of the Talle Creek beer. On the same day Toshi brewed 200L back at HQ and we blended the two batches together in a fermenter at HQ. That gave us 300L, the perfect amount to fill a 300L white wine barrel after the fermentation process.

Throughout fermentation we regularly tested it for the presence of any beer-spoiling organisms and checked to see if alcohol was being produced and if there were pH movements. The monitoring process is also very sensory – we smell it and look at it regularly.

So How’s Our Wild Ale Coming Along?

The beer is tracking well and is starting to develop some wild, sour notes to it .. so far so good! It will most likely end up as a pale, delicate beer but the actual style and description won’t be nailed down for a little while yet and will depend on the properties of that wild yeast strain that we captured on brew night. It’s a delicate operation and it takes a while for the yeast to build up a colony in the beer and infuse it with what we hope are some cool, funky flavours.

Where to From Here?

The beer is now sitting in the white wine barrel in AWOL where it will be infused with more of the barrel aging flavours which we’re tapping into with our new AWOL project. The entire process will take around nine months before the beer is ready to drink.

This truly experimental style of brewing is the antithesis of how we normally make our beers, in a strictly controlled environment where nothing is left to chance. This wild ale is our little experimental beer-baby and while we can’t make the definitive call just yet, so far it seems that the beer gods might be smiling on us.

Some of our first batch of AWOL barrel aged beers have been brewed using wild yeast. But these have come from yeast suppliers who cultivate the strains and whose properties and flavours are known and able to be replicated. This is how most wild yeast brewing takes place.

The yeast we captured in Talle Valley is our own unique strain. If your yeast delivers you an amazing beer you can potentially cultivate it under laboratory conditions and re-use it to brew more of the same.

In the Aussie craft beer scene there are a few breweries that specialise in and are renowned for their approach to brewing and blending wild fermenting beers. These include Wildflower Brewing and Blending in NSW, Van Dieman Brewing in Tasmania and La Sirène Brewing in Melbourne. It’s an exciting space and we are keen to experiment in more and more as time goes on.

We’re currently putting the finishing touches on our AWOL barrel aged beer project and in the lead up to the official launch we’re planning on opening for ‘sneak-peak’ private tours in early April. We will have 8 Barrel Aged beers on tap, some of them limited, and some available in cans. Our Wild Fermented Ale won’t be ready for a little while yet.

Follow @awolbeer for your chance to jump onboard for the tours and join us for the rest of the ride.