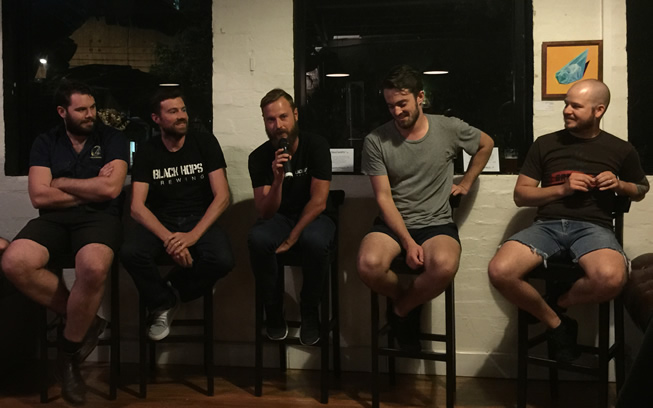 After a quick start last year with our Eggnog Stout release and launch, we set a big goal for 2015 to open a physical brewery. We’ll be releasing an update each month with our progress.

Here are all the details on what we are planning and the progress so far.

Why we want to do it

The craft beer scene is thriving in all of the major cities in Australia. Just look at the last week’s events with Brewsvegas, 800 odd people at the launch, 130 events and packed bars night and day for 7 days straight. The Gold Coast however is underrepresented and we feel in particular, it needs:

If such a place existed we probably wouldn’t be opening a brewery, at least not yet. Since it doesn’t, we are building it.

What we want to build and why

We started Black Hops because we believe we can make great beer and we can put the Gold Coast firmly on the craft beer map. We are passionate about sharing everything along the way to help the community, from casual drinkers, to home brewers and other craft brewers and bars.

We have struggled to find tank space to brew and we are all keen to turn this into something other than a hobby. We’d also like to set something up to enable more craft brewers to come into the scene in Queensland.

For the first year, one fermenter will be set aside for co-labs and contract brews. We want to see the Qld and Gold Coast craft beer scene take off!

We are looking at a 20 hectolitre system with 40 hectolitre fermenters. It’s a pretty big system for us but we think it’s a good balance. We can run it at low capacity when we first start, say 18 Kegs per week (one half batch per week) and scale it up to something much larger (perhaps 4 full double brews per week which would be 300+ kegs per week). It sounds like a crazy number right now but we think the craft beer space is exploding and we’d rather plan for this type of capacity potential. It will also make us appealing as a contract brew venue with the ability for brewers to come for one day and potentially leave with 70+ kegs.

It will be mostly a brewery and we will also have a cellar door open 1 day a week at first. We could open more often if the demand was there and that may depend on the location.

In terms of the location we have 2 areas in mind. One is the industrial estate at Currumbin.

The other is one of the 2 industrial areas at Miami. Including this one around Pacific Avenue.

There is also a tiny industrial area near Christine Avenue.

We think Miami would be the better of the 2 areas but it’s harder to find anything there and it’s quite a bit more expensive.

We’ve been chatting to town planners and real estate agents to learn more about what is available and the zoning requirements. In the current council plan it looks like anything with Industry 1 zoning should be fairly easy, anything with Industry 2 zoning is possible with some approvals and a few other things in place (truck access, consideration for neighbours etc).  We will look further into this once we get closer to choosing a location.

We’ve also started talking to people about licenses and approvals. We already have our producer wholesale license but we’ll have to move the licensed premises to the new facility (it’s currently Eddie’s garage). We will also need a food license and a few other licenses. We will do a separate post about that soon.

In terms of Miami vs Currumbin, we love both locations so we won’t let that decision slow us down too much.

How we will do it

We are all putting in all of our personal savings in to make this happen. We have also started meeting with investors to make up the difference. We have developed a pitch deck and projections which we have made available to potential investors.

If you are interested in more details on that please email us at beer@blackhops.com.au.

Once this part of the process is complete we will also publicly release the pitch deck in case other people want to use it as a format.

Chatting to investors has been fun and we are confident we will get the money together and find some great people to work with.

We are also planning to run a Kickstarter campaign to add $20,000 to the total. This is partly because we need an extra $20k more than we are raising through investors and also to help make some noise about what we are doing before we launch.

It’s a bit experimental, we aren’t aware of any other brewery in Australia that has launched on Kickstarter. That makes us a little bit nervous which tells me it’s worth doing. We are aiming to run the Kickstarter in June and we will provide more info about that soon.

We’ve set an ambitious timeframe to open the brewery. All of us want to do it this year, which means we have to get moving. Here is a rough guideline for our timeframes:

March – Start looking at locations and get a few options together for the premises. Also start talking to manufacturers about the equipment suppliers.

April – Lock in a location and choose an equipment supplier. Start talking to contractors to help with the premises.

May – Finalize the purchase of the equipment. Also attend GABS and Good Beer week.

June – Kickstarter runs this month, we will be busy organizing that and updating backers etc.

July – We will hopefully start our lease around July and start work on the space. We will also be looking after the rewards and communications for the Kickstarter (assuming we get funded).

August – The equipment should arrive this month, all things going well. We will spend August and September setting up the brewery.

September – We are hoping we will finalize the brewery setup in September and open at the end of the month.

The progress so far has been good. On the location front we’ve started looking around the industrial areas of Currumbin and Miami and found a few potential locations.

We’ve chatted to a bunch of people about equipment suppliers. Wade form 4 Hearts has been a big help as well as Joe from Bionic Brew in Shenzhen China, Brent from B52 Brewing in Texas and too many other people to mention around the local craft beer industry.

For good reason this is a proud man, congrats Wade and the @4heartsbrewing team. Stoked to see the opening night. #craftbeer


We’ve also been working with a local design firm on a re-branding our core range of beers and main brand. We think this is important for us to go to the next stage. We will be releasing a detailed post about that once it’s finalised as well.

We’ve been working on a marketing plan for the Kickstarter so we get a bit of attention when it launches.

On top of that we’ve been busy attending Brewsvegas events and chatting to others in the industry. It’s been a great week and it’s also helped us test a bunch of beers in small release batches. This has gotten us closer to working out what the core range beers will be.

Well that was fun. Thanks for having us @hoohabar_ #brewsvegas15


A big thanks to Ross at Bacchus and Paul at Pickled Pig Brewery for letting us brew the beers for the events.

Thanks for having us today @bacchus_brewing !!


Stay tuned to the blog, jump on our email list below or like us on Facebook to get updates about how it’s all going. If you have any comments please let us know below.

It’s going to be a big year, we can’t wait to share more of the journey as the months go on.