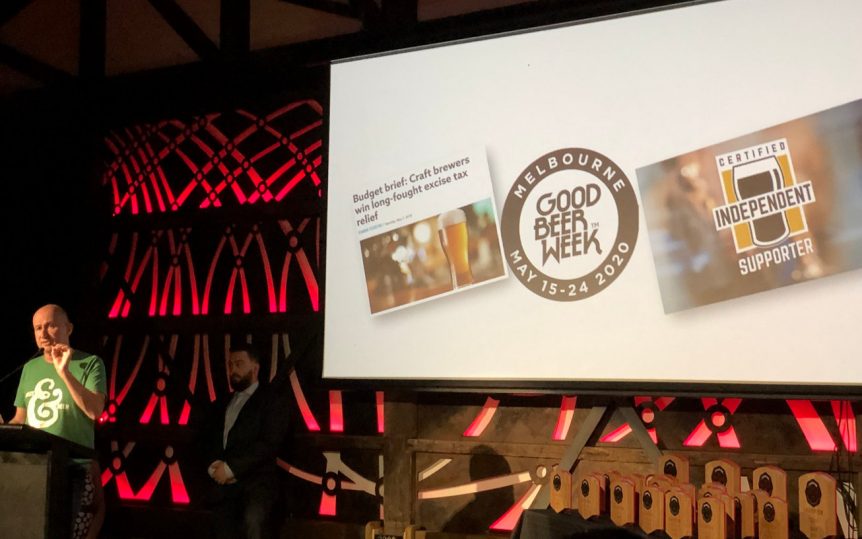 On Wednesday, 4 September a Black Hops contingent headed down to Melbourne for the seventh annual BrewCon and Trade Expo, which culminated at The Independent Beer Awards (aka ‘The Indies’).

This was our first time attending both the Expo and the Awards Night. During the day of the conference it was good to mingle with our independent brewing colleagues from all over Australia. The Expo is recognised as one of Australia’s premier education and trade events within the industry. Black Hops founders Dan and Govs participated in panels during the conference on the topics of Crowdfunding (Dan) and brewery gas supply (Govs).

Then in the evening it was time to spruce up and get along to Australia’s largest independent beer competition, The Indies, which provides an opportunity for brewers to benchmark their beers while recognising excellence within the brewing industry.

This was our first time both attending the event and entering our beers. With the judging panel assessing over a thousand beers, we knew that getting a gong on the night wasn’t going to be easy. So we were very proud to come away with a range of medals across all of our entries, including two Gold Medals, for Pink Mist (Raspberry Saison) and G.O.A.T. (Hazy IPA). Both these beers have form when it comes to going gold, having previously scored at the annual AIBA’s.

All up we entered our eight beers in both the draft (can) and pack (keg) categories, which were judged separately. The full list of results is as follows:

As well as being proud of our individual efforts, it was once again it was a great result for the entire Queensland independent brewing fraternity. Our Gold Coast colleagues at Balter Brewing took out the prestigious award of Champion Independent Brewery (QLD).

Some of the major Champion Trophy winners on the night were: