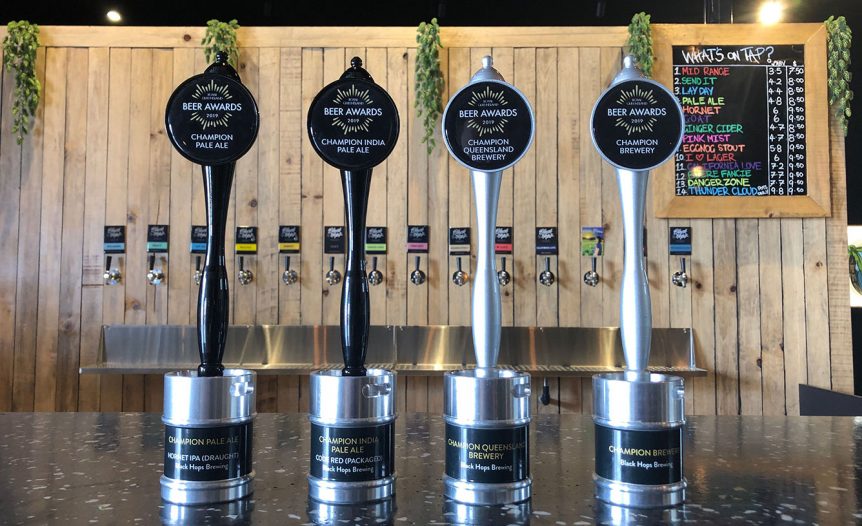 The Gold Coast craft beer community are a pretty tight knit fraternity, so it was great to see a bunch of us do well at the recent Royal Qld Food & Wine Show (RQFWS) Beer Awards, which took place at the Brisbane Showgrounds on 13 March.

A strong Black Hops contingent went up on the day, including Black Hops founders myself, Eddie and Govs, together with the brew-crew (Toshi, Curran and Gareth). We all had a great time soaking up the atmosphere (and the beer!) and mingling with lots of others in the industry who were in attendance from breweries from all over Australia.

There were a host of Awards on offer, and we were honoured to be awarded gold medals for our Pale Ale, Hornet and Code Red as well as receiving four individual Trophies on the night:

Coming away with these four awards was an exciting result for us, and full credit to Govs and the brew-crew for making the gold-medal winning beer.

While it’s great to be personally acknowledged by the industry, we were also equally pleased to see our fellow Gold Coast craft breweries, Burleigh Brewing Company, Balter Brewing and Currumbin Valley Brewing, also do well.

Kudos also to Balter for taking out the ‘Champion Session Beer’ award with their Captain Sensible mid strength beer.

Currumbin Valley took home 2 bronze medals in their first outing at the awards for their Local Pale Ale and their Stout.

The Queensland awards were being held for the first time in 6 years and we’re excited about having the awards in March each year, enabling all breweries to gain valuable feedback leading into the Australian International Beer Awards (AIBAs) in May.

These results further emphasise the high standing of the Gold Coast craft beer industry, and the fact that we can compete with any part of the country when it comes to brewing quality beer.

Cheers to a prosperous 2019 for all Gold Coast brewers.