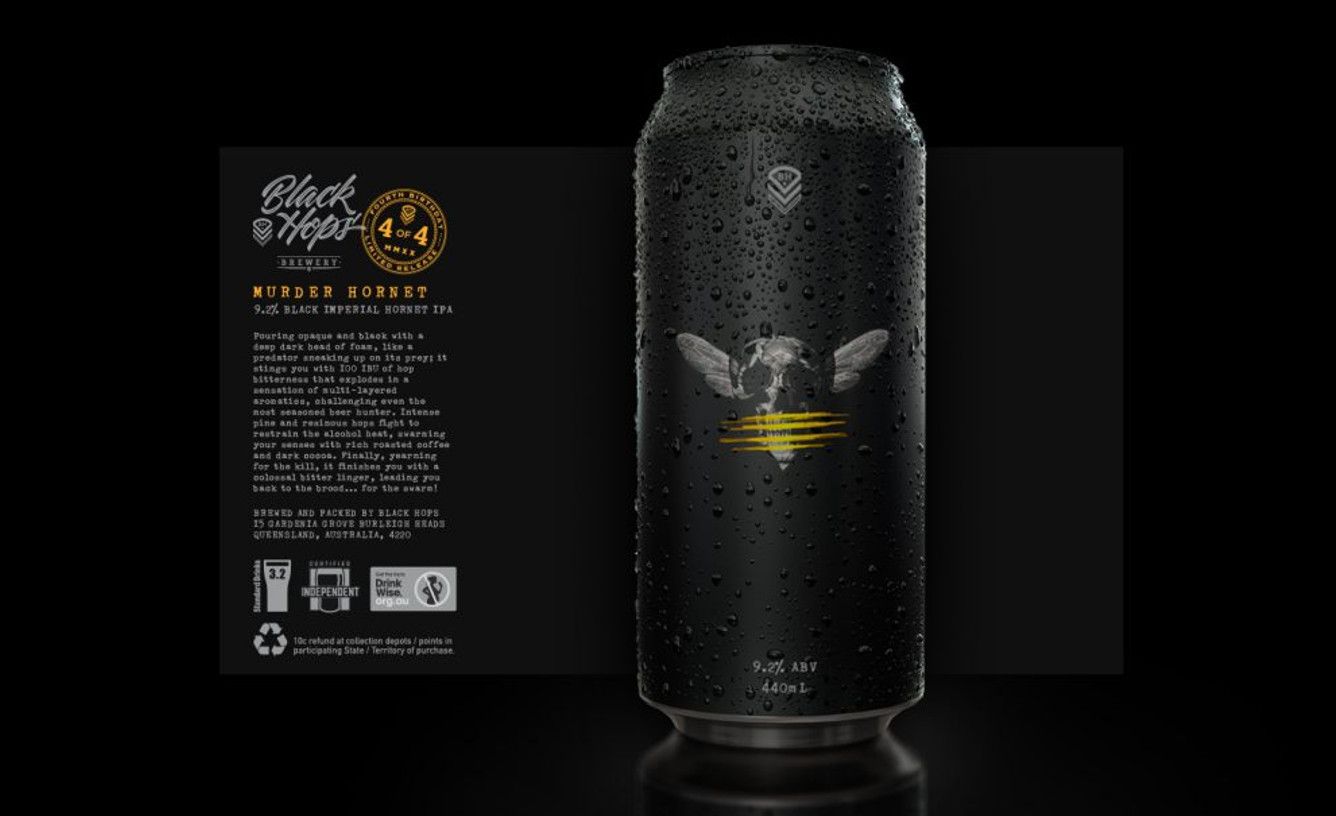 The GABS Can Design Awards, now into their second year, are held in recognition of the fine art of designing a killer craft beer can.

At last year’s inaugural event we were stoked to make the list of finalists with our limited release Moondancer Hazy IPA, with can designer Troy creating a new character, affectionately dubbed ‘Hop Man’, dancing around a campfire under a full moon. Apparently, the design was so popular it inspired more than a few Hop Man tattoos and fireside beers! Moondancer ended up coming in 7th.

This year over 140 breweries entered the awards, and our 2021 entry was for our limited release Murder Hornet Black IPA can, designed for our Burleigh Taproom 4th birthday celebrations by Dave Heavyside.

To narrow the field down to a top ten of finalists the public got to vote on their favourite can art – check out this link to see how many amazing designs were in the running.

Once the votes were tallied we were stoked to finish once again as a top 10 finalist, making it 2 years in a row. From there a judging panel came up with the final rankings and we managed to finish in fifth position.

Dave is one of the best creative designers we’ve met and Murder Hornet was the first design we got him on board for. This can was a bit of a change in direction for us, but Dave absolutely nailed it. In his words; “Maintaining a fine balance of complexity and simplicity was key to this design working, and having the impact that we wanted it to have as the flagship beer of the BH 4th Birthday Series.”

It was a bit of a back and forth process to land on the final version. Here’s how it played out.

When we first commissioned Dave for the job we gave him this description of the beer to see what he could come up with:

“This is Murder Hornet, a 9.2% Black Imperial Hornet IPA. Pouring opaque and black with a deep dark head of foam, like a predator sneaking up on its prey; it stings you with 100 IBU of hop bitterness that explodes in a sensation of multi-layered aromatics, challenging even the most seasoned beer hunter. Intense pine and resinous hops fight to restrain the alcohol heat, swarming your senses with rich roasted coffee and dark cocoa. Finally, yearning for the kill, it finishes you with a colossal bitter linger, leading you back to the brood… for the swarm!”

So Dave got to work, locking in on a minimal, cryptic aesthetic, trying a number of line drawings before settling on a minimalist wasp with a styled type treatment in Hornet orange.

Landing On A Scarier Design

This original design was solid, but it wasn’t quite matching up with the bold, angry taste of the beer and its murderous description – it needed to be scarier!

So scary is what he came up with, working on a bolder, more ominous design. Here’s how he described the creative process; “With the Skull Hornet, it was about using a process of experimentation to find the right blending mode for the effect that I wanted, and a lot of trial and error in terms of image placement and size to find the perfect balance which created the final design. I hand drew the 4 claw marks and scanned them in then used some blending techniques to add the colour.

I then had to use a complex process of flattening and image processing to create the final print ready image file, and also keeping in mind that Black Hops wanted this on a shirt, I needed to find a way to create a Vector version without losing the detail in the image that would be suitable for screen printing.”

When we saw the final design we knew that he’d nailed it, so the Murder Hornet can was unleashed.

More Can Designs From Dave

Since the success of the Murder Hornet design we’ve continued to work closely with Dave on quite a few different cans – over 30 in fact! As well as Murder Hornet, he also designed our other 4 Birthday Beers in the series; Zappy Birthday IPA (in homage to musical maverick Frank Zappa) Vermonster Nitro Sundae IPA and Black Forest Birthday Cake Stout. If you’re interested in finding out how he came up with these other birthday beer designs, check out his blog.

As well as our Birthday Beers, some of Dave’s other Black Hops designs have included the striking Caribbean Haze and Neverland IIPA limited release cans, as well as our newest core range beer, East Coast Haze.

We also work with lots of other designers at Black Hops, it’s something we like to share around. Next year our goal is to make the list for the 3rd year in a row with a different designer.

Related: the evolution of our beer design & packaging process.

We hope you’ve enjoyed this insight into how we landed on the Murder Hornet can design. As always, if you have any thoughts, feel free to hit us up in the comments below.