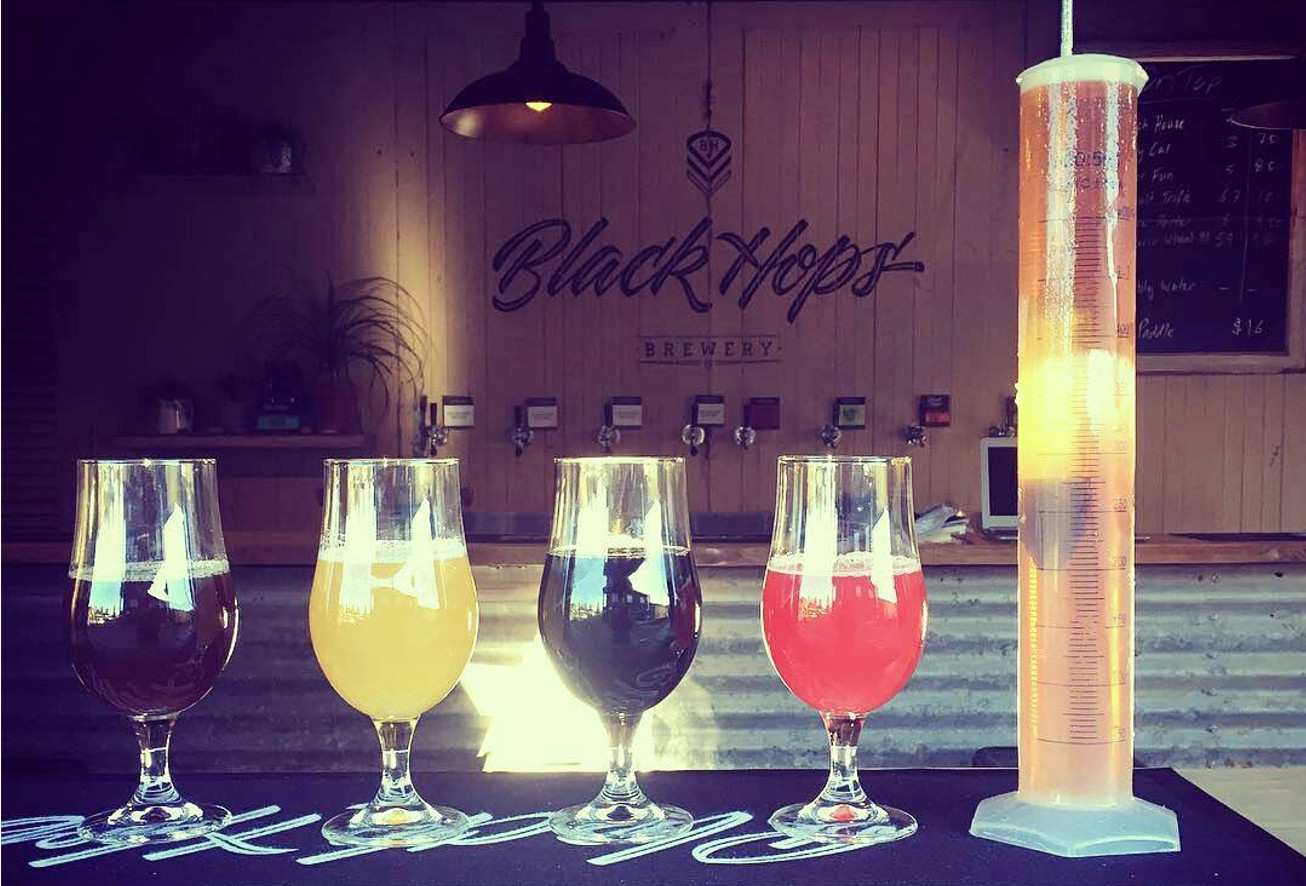 Recently on the blog we’ve been looking back on the beginnings of our brewing journey, when Govs, Eddie and myself were coming up with beers all the while planting the seeds for the launch of our first brewery in Burleigh Heads.

In part one of our early beers series we reminisced on the beginnings of the beer that started it all, Eggnog Stout, as well as re-visiting the next five beers that followed; Goldtoast Pale, Dark Monk/Funky Monk, Grapefruit Berliner Weisse, ABC Bomb and Beach House.

While part two of the series focussed on the next batch of six beers that we ever brewed under the name of Black Hops (but before we opened our first brewery), namely; Code Red, Gold Coast Pale Ale, Beacon Street Farmhouse Ale, FIENS, Killpatrick and Pink Mist.

As a side-note, a few additional early day beers were unearthed as part of the research process, which has resulted in a slight re-jigging of the running order, as well as the addition of Beacon Street Farmhouse Ale and FIENS into part two.

For this next chapter, we’ll run through the next batch of eight beers we made, just before we became a fully fledged brewery in 2016.

This beer has followed an interesting trajectory and actually slots in where we left off at the end of part two, with Pink Mist. As the story goes, in 2015 we were asked to serve beers at the wedding of our mates Byron and Kim. We managed to make our own portable 4 tap bar system for under a grand and the wedding party put in a request for Beach House and Gold Coast Pale Ale (which we were already brewing), as well as for a Cider and a Mid Strength option.

We were sorted for their first two requests, but at the time we didn’t have a Cider or a Mid Strength. For the cider Govs got creative and suggested we fruit Beach House with some fresh raspberries to deliver a cider-like option, giving birth to beer Pink Mist Saison (which was beer number ten on our previous list.)

Which left us with the task of brewing our first Mid Strength beer. A beer we had all enjoyed around this time was an OG craft beer from America called Anchor Steam. It was a relatively unknown style of beer at the time, and probably still is, a Californian Common Lager.

It went down well at the wedding and when we launched Black Hops HQ in 2016 we actually opened up with this beer in our core range.

As was the case though with Beach House, while we loved the beer, the craft beer market wasn’t quite as into it as we were. We still needed a viable Mid Strength beer in our core range though, so we tweaked the recipe and style and Thirty Cal Mid Strength became Thirty Cal West Coast Pale Ale.

Once again the beer was good, however this time we found that the name didn’t suit, as people mistook it for having 30 calories – which, come to think of it, is not a lot!

So it became a case of third time lucky, when we changed the name to the strong and simple Mid Range Pale Ale, which sits in our core range to this day.

I Heart Lager was our first collab beer with another brewery. We brewed it with the legends Wade and Rob at 4 Hearts Brewing. This beer was a hoppy black lager brewed with weyerman sinamar and centennial hops.

When it came to naming the beer, we incorporated the 💗Heart from 4 Hearts, but we also liked to say we loved lager as a way of ‘going against the grain’ of the IPA and Pale Ale love in craft beer circles (which we love too, of course). And we thought it would be cool for it to be a black lager too.

4 Hearts Brewing was started by Eddie’s cousin in law Wade Curtis and they were a huge support to us early on, offering up their good sized system for early Black Hops contract brewed batches. We did follow up batches of I 💗 Lager a few times after that initial batch (in fact we’re brewing it again right now).

A clean crisp hoppy black lager brewed with cold pressed Carafa grain to give a rich dark colour without the roast or bitterness you would expect from a dark beer.

Free The Hops was our first Session IPA, which we brewed for the Free The Hops Craft Beer Festival, which took place across various venues on the Gold Coast in 2015. Here’s how we described it:

Showcasing some of the biggest and best US and NZ hops, this is an IPA you can enjoy all day. With strong aromas of mango, grapefruit and lychee, and a slight sweetness from the toffee malt to balance its firm bitterness.

Up in Smoke was a peat smoked amber ale that we brewed for the Up in Smoke event (part of the Free The Hops Festival) at one of our favourite watering holes at the time, Lester & Earl, in Palm Beach on the Gold Coast. As well as the batch that was pouring on the day, we also ended up brewing another batch in the car park during the event!

As part of the aforementioned Free the Hops Festival, we also brewed up a one-off Strawberry Saison that was voted on by the drinkers, which poured at Ze Pickle in Burleigh Heads.

A Belgian saison with fresh strawberry and hibiscus flower added at the end of fermenting, this beer came out pretty clear in colour after brewing (unlike the similar style Pink Mist), but tasted great.

This beer has a pretty incredulous story behind it. One day in early 2015, Eddie got an email from video games giant, Activision, about the possibility of doing a beer for the release of one of the world’s most popular video games, Call of Duty.

At first we didn’t know what to make of it. In the words of Govs; “When Activision first contacted us we thought it was a hoax and had no idea that it would turn into this amazing partnership. We love beer and we love video games, especially Call of Duty, so when the opportunity to create Black Hops III to celebrate the launch of the new game came up, we jumped at it.”

Of course our brewery wasn’t even open yet (we may have held this detail back for a few calls), so once agreed we travelled to Sydney to contract brew a midnight Pale Ale. When the game was released, it was accompanied by an official beer launch and attracted a whole lot of local and international press.

It was a delicious hoppy, fruity Pale Ale which looked more like a stout and came in black bottles – the idea was that drinkers would get a surprise when the beer was poured into a glass. It was very highly rated and well received and proved one hell of a way to put Black Hops on the map before the doors to the brewery were opened. We even got to put together a video for it.

Once again this is a beer with an interesting evolution. It started life as our first collab beer, Goldtoast Pale (as outlined in part 1 of our early brewing days series). In mid 2015 we used the same recipe and re-named it as Gold Coast Pale Ale (which appeared in part two of the series), for what was intended to be Black Hops’ original Pale Ale for when we opened the brewery.

When it came time to brew it in 2016, we accidentally hopped it twice. But sometimes these things are meant to be and we discovered that it actually tasted rather good. On Eddie’s delivery to a venue (House of Brews) he came equipped with the whole backstory to which Ian replied ‘That’s a bit of fun’. Eddie came back to the brewery with ‘Bitter Fun’ as the name and the rest is history.

So instead of pouring it down the drain, we released it under the new name of Bitter Fun and it grew into a crowd favourite.

And while Pale Ale in cans ended up becoming our Pale Ale flagship, Bitter Fun has had its hard core followers and we even re-released it as a limited run batch in 2019, amping up the ABV and the Aussie hops to make one of our old favourites, even more fun.

Following on from the success of Kill Patrick Oyster Stout, our very first beer at the Great Australasian Beer SpecTAPular (GABS), in 2016 we came up with the craziest list of ingredients we’d ever dreamt of throwing into a beer to create our next GABS entry, Assault Trifle Pale Ale. Here’s what went into it – madagascan vanilla beans, 60kg of fresh mango, apricot, peach and passionfruit, sponge cake in the mash, aeroplane jelly in the kettle, toasted coconut, milk sugar for sweetness and 6 flagons of vanilla infused cream sherry to top it all off. A fully blown sensory assault not to be trifled with!

Assault Trifle was one of only two Queensland beers to finish in the top 10 at GABS in 2016. Since then we’ve brought it back a few times for special events such as our GABS Revival event, and it’s a bit of a favourite amongst a few of us here.

We hope you’ve enjoyed this little trip back in time to the origins of this brewing adventure that we’re all still on.