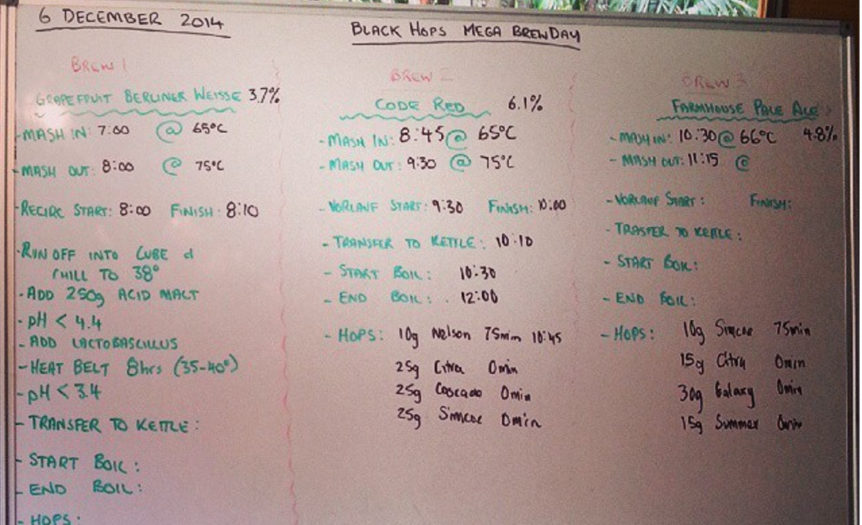 Recently on the blog we took you back to the beginning of our brewing days, when Eddie, Govs and myself were transitioning from keen amatuer home brewers with a dream to putting the foundations in place for opening our very first brewery, Burleigh HQ.

Back then all of our beers were brewed exclusively in bottles and all in very small batches on Govsie’s home brew system. In part one of our early beers series we reminisced on the beginnings of the beer that started it all, Eggnog Stout, as well as re-visiting the next four beers that followed; Goldtoast Pale, Beach House, Dark Monk/Funky Monk and Grapefruit Berliner Weisse.

In this post we’ll continue to revisit our early forays into brewing and take you through the next batch of five beers that we ever brewed under the name of Black Hops (but before we opened our first brewery).

Back then we were focusing our beer sales at a bunch of local Gold Coast and Brisbane bars, including Lester and Earl in Palm Beach, Ze Pickle in Burleigh, Cambus Wallace in Nobby’s, HooHa Bar at Southbank, Woolly Mammoth in the Valley and The Scratch Bar at Milton. At that point Govs was making the beer (we were all helping), Eddie was doing sales and I was helping out a bit doing decals and the like but we all had full time jobs.

This beer is one of the favourite non-core beers in the Black Hops range (just secretly, it’s one of our faves too).

Back when Eddie and I were first getting into craft beer, we got our hands on some Dainton Red Eye Rye (red IPA). Eddie described the taste to me as ‘jammy’. This was very early on when beers either tasted like beer or if you were lucky ‘fruity’. I didn’t even know you could get red beer!

When we first hung out with Govs up at Mount Tamborine and Eddie dropped his Eggnog Stout idea, one of the beers we loved the most was a Fortitude Brewing beer called Admiral Ackbar, a big red double IPA. When we returned to the mountain for the very first Eggnog Stout brew day, Govs had made up some slow cooked meat made with Admiral Ackbar – it was the best thing any of us had ever eaten!

Govs’ favourite movie is A Few Good Men and the movie’s iconic ‘code red’ scene had stuck in his mind as a cool name for a beer.

Code Red you could say, was always meant to be..

Here’s a pic from our second ever homebrew day up at Govsie’s place at Mount Tamborine in December 2014. The list includes Code Red as well as Farmhouse Pale Ale (we ended up calling this one Beach House). Both have gone on to become trophy winning beers. Beach House won Australia’s champion Saison at the Australian International Beer Awards (AIBAs) and Code Red has had 3 AIBA gold medals and has won Queensland’s champion IPA 2 out of the last 3 years at the Royal Qld Beer Awards.

It has also had a few off-shoots, including the extra-strength Imperial Code Red and underground cult fave Covert Red.

A classic American Red Ale, boasting a rich toffee malt body and a luscious ruby colour with minimal yeast character, providing a clean finish and allowing the Simcoe, Citra and Mosaic hops to shine through.

This beer had an interesting evolution. It started life as our first collab beer, Goldtoast Pale (as outlined in part 1 of our early brewing days series.) In mid 2015 we used the same recipe and re-named it as Gold Coast Pale Ale, for what was intended to be Black Hops’ original Pale Ale. We got it out in a few bars and venues and people enjoyed it.

This beer then morphed into one of our first beers when we opened the brewery. It was a bit of a happy accident as to how it came about, and we’ll let you know about it in the final part of our early BH beers series.

Beacon St Farmhouse Ale was brewed especially for the Brewsvegas event, Flavours of Tamborine at Hooha Bar. The name comes from Beacon St, Mt Tamborine where the famous Mount Tamborine Distillery is found.

We used Quandong Liqueur during fermentation to bring the flavour of Tamborine to this interesting take on a farmhouse ale.

This beer was an Imperial version of our debut beer, Eggnog Stout. It’s made a few comebacks since we first brewed it, including for the opening of our original Burleigh brewery in 2016.

Inspired by brewers in the 1800’s, this ‘king of stouts’ boasts high alcohol and plenty of roasted, chocolate and burnt malt flavours. The spice mix of brandy, vanilla, cinnamon and nutmeg complements the aromas of dark fruit from the French saison yeast. FIENS is a rich, intense beer with big complex flavours and a warming finish.

Kill Patrick was our very first beer at the Great Australasian Beer SpecTAPular (GABS), an annual showcase for craft brewers from all over Australia.

This beer was our first foray into the world of creative brewing, a robust stout brewed with fresh local oysters from the Tweed Heads region, just down the road from us on the Gold Coast. We brewed it at Bacchus in Brisbane where we were doing most of our beers by then, and we even ate a few of the oysters out of the boil.

In May 2015 Kill Patrick hit Melbourne for GABS and Good Beer Week. It was well received with 170 ratings at 3.44 on Untappd. It also made the journey for GABS Sydney making it our first beer in NSW too!

At GABS 2015 Kill Patrick placed 13th out of 118 beers in the Beer and Brewer People’s Choice Best Festival Beers. We were blown away by that – the previous year we were down at GABS dreaming about how cool it would be to one day have a beer there! The guys at our local craft beer venue Ze Pickle even put it on tap, which was super cool for such a weird beer.

Our first GABS beer, Kill Patrick is a Stout first and foremost, with hints of smoked malts, and a touch of rye. This beer is brewed with fresh unshucked oysters and spiced with tamarind, clove, pepper and lemon zest.

Pink Mist is another beer that came from humble beginnings to become a critical and crowd favourite. We were asked to serve beers at the wedding of our mates Byron and Kim. As well as being a mate, Byron is also a plumber and one of our tradies on-call and has helped from day 1 setting up our various breweries.

Weddings are always an event for raising a toast and at the time of saying a resounding yes to their request, we didn’t have a brewery, or any way of pouring the beers we would be bringing. After investigating our options, we came up with the fun and creative solution of making our own custom built jockey boxes for the occasion. We managed to make our own portable 4 tap bar system for under a grand. We wrote a post about it at the time – check it out here.

Byron and Kim put in a request for Beach House and a Pale Ale (which we were already brewing), a Mid Strength and a Cider. We were sorted for their first two requests, but at the time we didn’t have a Cider or a Mid Strength. We came up with a Mid Strength (which we’ll talk about in part 3 of our early beers series, coming soon). And for the cider, Govs got creative and suggested we fruit Beach House with some fresh raspberries to deliver a cider-like option. And so the legend of Pink Mist Saison was born.

Since then Pink Mist has become one of our most loved and award winning beers, achieving three AIBA gold medals and regularly featuring on tap and in cans at our breweries. And to coincide with the recent launch of our new AWOL barrel aged beer taproom, we created an AWOL Pink Mist, delivering the added complexity of being aged to perfection for six months in oak barrels.

We hope you are enjoying our early beers series, as we go back and reminisce on the beers we brewed as we were dreaming of having our own brewery. Stay tuned for the final part of the trilogy, where we reveal our first Mid Strength beer, take you further along the path of our Pale Ale evolution (including a mind blowing opportunity from global games franchise Activision) and get rolling with a dessert stout not to be trifled with as with our second GABS entry.