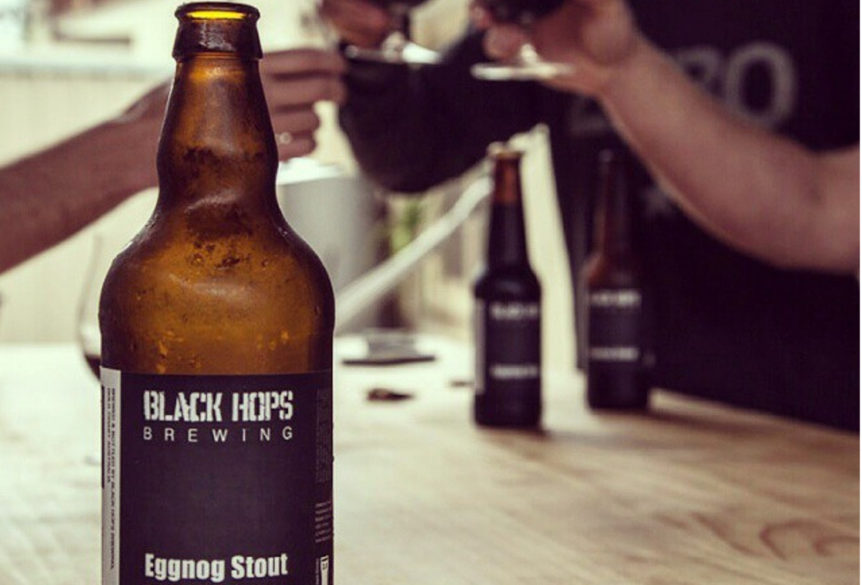 Those of you familiar with the Black Hops story may know that back in 2014 three fresh faced lads, Govs, Eddie and myself, set about walking our talk and brewing a beer that Eddie had come up with that we all thought was worth giving a crack. The name of that beer was Eggnog Stout.

What you may not know, is we also had a bunch of other ideas bubbling around at the time.

Things were a bit different back then. All of our beers were brewed exclusively in bottles and all in very small batches on Govsie’s home brew system. Some of these beers went on to be our most highly awarded and successful beers, others were never made again.

In this post we thought it would be fun to revisit our early forays into brewing and take you through the first five beers that we ever brewed under the name of Black Hops (but before we opened our first brewery).

This is the beer that kicked it all off. In July 2014 Govs, Eddie and myself sat around at a pub in Mt Tamborine talking about beer. The conversation led to brewing and Eddie mentioned he had an idea for a beer, called the Eggnog Stout.

He had recently entered a competition by a well known craft brewery, 4 Pines, to suggest a flavour for their next limited release. He didn’t win with the idea, but they did say they liked it so they sent him a carton of their stout in stocky little 600ml bottles.

Govs had been a professional brewer for years and as luck would have it, had just set up his own pilot system at home, made up of a bunch of old kegs. He was eager to brew some more experimental brews, so the following weekend we headed back up the mountain to brew the Eggnog Stout.

In the 2 weeks before brew and bottling, we tossed around brand ideas and after many options, one name in particular stood out – Black Hops.

When the beer was ready, we hand-bottled it into Black Hops branded bottles and headed to Eddie’s place for our first tasting session. The beer smelled and tasted amazing, just as Eddie had described it in that initial conversation; subtle notes of nutmeg cinnamon, vanilla and brandy but generally just a solid dry Irish stout.

Some of this original batch got handed to mates, but importantly a few were distributed to people in the industry – mainly contacts Eddie had established from hanging around in craft beer bars in Brisbane.

With momentum building we made the leap from homebrewing to commercial brewing, gypsy brewing our first batch of Eggnog Stout for commercial sale under the Black Hops name in October 2014 at the Beard and Brau brewery on the scenic rim.

Once we’d brewed enough Eggnog Stout to keep a gathering lubricated, we organised an official launch party on 2 November at the fantastic Hoo Ha Bar in South Brisbane. Friends and family came and the keg was drained in 2 hours and 20 minutes. People loved the Eggnog Stout!

Since then, Eggnog Stout has remained a much loved part of our range and a solid performer with both customers and at various awards ceremonies. The original recipe has remained pretty much un-tweaked, and every now and then we’ll custom brew a batch of Eggnog Stout on Nitro, which always goes down a treat. It’s a beer that we’ll always hold very close to our hearts.

A dry Irish Stout with subtle notes of nutmeg, cinnamon, vanilla bean and brandy. It showcases a mild bitterness through the use of roasted barley and a generous late hop addition.

This was technically our first collab. In 2014 we were introduced to Bree, a friend of Govs who ran an event called the Gold Toast Supper Club. She ran monthly beer and drinks meetups. They had one planned around the theme of Colonial Australia and we agreed to brew them a special beer for it. Each member would get one bottle at the event. We always thought we would do a beer called Gold Coast Pale Ale and because their club was called Gold Toast, we called it Gold Toast Pale Ale.

This was back in the day when I was doing the labels myself so I chose some obvious colours (sand and sea) and made a basic bottle label. Hand labelled as you can see from the not-so-straight example above. The beer itself was an Aussie Pale Ale, easy drinking, 4.5% ABV with Aussie hops.

Beach House was another Eddie brainchild. He fell in love with the Farmhouse / Saison style and when we used to brew amongst ourselves back then we would always drink a bottle of our favourite beer in this style, Saison Dupont.

So the idea of a hopped Saison, easy drinking fresh and crisp made a lot of sense. And being local to the Gold Coast, we thought the idea matched with the name ‘Beach House’ perfectly.

We saw Beach House as potentially our best idea for a beer. When we finally built the brewery, Beach House was our flagship beer. We wanted this to be our number 1 seller and we saw it as having the potential to be to us what something like Pacific Ale was to Stone & Wood (although obviously not on the same scale).

Saisons have great qualities like their low bitterness, low hop aroma, and a wheaty dry finish. But the funk often associated with them, the yeasty appearance and spicy hops could be a turn-off. This is where Govs made his tweaks and came up with a modern twist on a traditional style by including modern Australian and New Zealand hops and adjusting the fermentation temperatures to make a Gold Coast version of a traditional style. Blending a nice hoppy pale ale, with a delicious Saison flavour seemed like a no brainer. Particularly for the tropical Queensland climate.

Unfortunately while the beer was much loved (and was our biggest selling beer for a period of 18 months in the early days) the required sales growth did not follow. Changing people’s default style from Pale Ale’s and IPA’s to something new called a Saison required way more education and explanation than we anticipated.

The second GABS Hottest 100 where Beach House failed to make the list was a turning point for us. We realised that it really wasn’t capturing the hearts and minds that we wanted it to. We made a drastic shift after that and brought a Pale Ale back into our lineup (the current Black Hops Pale Ale), as our first beer into cans and the rest is history.

We still brew Beach House pretty regularly, just for the taproom and for award submissions and it goes very well. Case in point – the annual Australian International Beer Awards (AIBA’s), where it recently achieved Gold Medal status for the third time. And in 2018 Beach House took out the prestigious title of Best Belgian / French Ale in Australia.

ABC Bomb was a beer very much inspired by a new beer on the market at the time called Karma Citra, an India Black Ale made by Feral Brewing. At this time we had a phase that we often used, ‘Always Be Closing’ and we wanted a beer to fit the phrase. So along came ABC Bomb .. aka American Black C Hopped Bomb. C hops are the famous OG American hops such as Citra, Columbus, Centennial and Chinook, and all of these hops went into the first batch of ABC Bomb .. and every batch since.

ABC Bomb went on to become one of our original ‘4 seasons’ IPA’s, It was our winter IPA, together with Flash Bang (Wheat IPA – Spring release), Hornet (IPA – Summer release, which of course went on to become a core range staple) and cult fave Code Red (Red IPA – Autumn release). Since then we’ve sporadically brought it back as a limited release run at the taprooms where it’s always been a crowd fave. We released it as recently as a few weeks ago at the time of writing.

This hoppy Black Ale is balanced by a strong citrus and pine hop aroma and a distinct roasty dark malt character. The use of American hops gives this beer a genuine IPA backbone with a unique spice flavour through the addition of rye. An American Black C-hopped bomb.

This beer was inspired by Ian Watson, who at the time worked with Govs at his previous brewery job at Fortitude Brewing (currently at Slipstream). He was renowned for brewing robust Belgium beers. Govs learnt a lot about brewing these bold Belgian styles from Ian.

At one stage Ian passed on a bottle of Murray’s Bulgin’ Boysterous Bicep Oyster Stout. At the time Govs had also just read a book that Ian lent him called ‘Brew Like A Monk.’ This all aligned to provide us with the inspiration to make our own version of this style of beer, which we christened ‘Dark Monk’. We stuck to a pretty traditional recipe, using all Belgian malts, dark candy sugar and Belgian yeasts.

Funky Monk was the same beer – we brewed it at the same time however each bottle had an oud Bruin style of Belgium wild yeast which would take a few months longer to develop.

As an interesting aside, Eddie recently managed to dig out a bottle of Dark Monk (above) that we brewed a little while after the original batch! We did this one for a Bacchus Brewing event (hence the Bacchus bottle). While beer is meant to be consumed fresh and not years later, Eddie managed to get through most of it, which he described as “surprisingly not awful, thin bodied with a flanderish flavour but not full blown infected which I thought it might have been.”

The origins of this beer have become somewhat shrouded in the mists of time. I know we wanted to brew a smashable easy drinking light and refreshing beer and we thought this combo was perfect. None of us can recall if we had a reason to brew it other than just for fun.

Govs has a recollection of putting wort jars under his citrus trees one night when he lived up on Tamborine Mountain, which we then used to inoculate and sour this German style wheat beer. For this lightly hopped beer we also used some pale malted barley, wheat and grapefruit zest. What we definitely remember about this beer was that it was quite delicious.

A few years later, around the time we launched the Burleigh Brewery, we brewed another beer using grapefruit zest, the Kramer Grapefruit XPA. Eddie and Govs spent a few busy nights madly grating a massive batch of grapefruit to get the zest for the beer – the cuts and stinging fingers they copped as a result is certainly something they haven’t forgotten in a hurry!

Keep an eye out for part two of our ‘early Black Hops beers’ series, where we’ll once again delve back into the memory banks to bring you more of our early home brew creations. And again some of these beers became much loved Brewery favourites (check the image above for a sneak peak of one of them).

We hope that this post has given you a fun insight into the origins of our Black Hops journey. If you have any feedback or questions feel free to ask in the comments below.