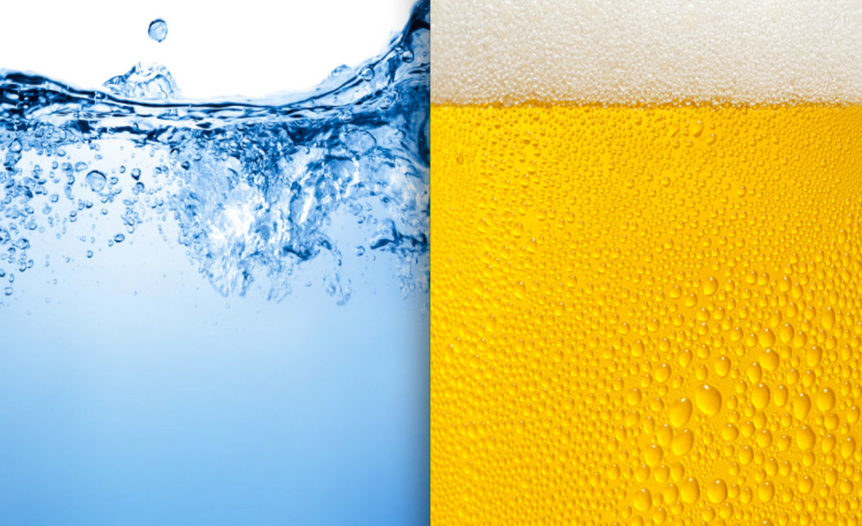 Back in 2018 we wrote a blog post called Water Chemistry: The Science of Brewing an Epic Beer, where we talked about the importance of water in the brewing process. Despite being plain on the eye and palate, water is actually a complex chemical beast, consisting of salts, ions and minerals, that must be analysed and tweaked during the brewing process to ensure the correct balance and alkalinity for the style of beer you’re brewing.

In this follow up article, we discuss how we’ve gone about keeping our water chemistry consistent across all of our breweries, particularly in relation to the circumstances we encountered when we launched our Brisbane brewery and taproom in November last year.

The consistency of the water coming straight out of the tap at our two Gold Coast breweries (HQ & BH2) is largely similar. Slight variances can occur as a result of pipework and building infrastructure between the two sites, but the water itself is coming from the same source.

When it came to the chemical makeup of Brisbane water though, I suspected that it would be quite different to it’s Gold Coast counterpart. So when we confirmed that we were opening a Brisbane brewery the first thing I did was run some filtration tests and send off some water samples from our Brisbane site to be analysed.

When the results came back it confirmed my initial thinking – the chemical makeup of the water was indeed quite different and we would need to take this into account if we were to maintain the consistency of our beers between our Brisbane and Gold Coast breweries.

As well as having a higher chloride to sulfate ratio, Brisbane water also tends to contain greater levels of ‘heavy metals’ such as iron, which is not desirable for any beer that you brew!

The main difference between the Gold Coast and Brisbane water is to do with its sulfate to chloride ratio (SO4:Cl). Sulfate and chloride are two minerals/ions present in water which impact the brewing process.

Water that contains a higher sulfate to chloride ratio will help accentuate a beer’s perceived hop characteristics and is typically associated with a bitter, dry, clean flavour profile. Gold Coast water fits this profile, which makes it ideal for brewing our IPA’s and Pale Ales.

Brisbane water is a little bit ‘harder’ and has higher chloride levels (ie. a higher chloride to sulphate ratio) than Gold Coast water. Chloride as an ion in brewing is really good for accentuating malt character and can bring through a sweetness profile in beers and contributes to the perceived ‘mouthfeel’ of the beer. Which makes it great for brewing malty beers such as Stouts and Belgians.

As an interesting counterpoint (and to be slightly contrary) New England Pale Ales (NEIPA’s) and Hazy IPA’s will actually brew better using ‘harder’ water with higher chloride levels. For these beers you want to bring through a bit more of that malty sweetness in order to accentuate the juicy, tropical fruit flavour so that it’s not overwhelmed by the more intense hops.

So as you can see, water plays a vital role in getting your flavour profile spot on and must be tailored to fit for the style of beer you are brewing.

As discussed in our earlier article on water chemistry, the concept of water provenance (the specific water chemistry associated with particular regions of the world) plays an important factor in the style of beers synonymous with a particular region. Water provenance is one of the main reasons why certain locations became famous for specific beer styles. Take Ireland for example; the water near Dublin is very high in alkalinity, which makes it very suited for brewing Stouts and Dark Ales. This contrasts with the softer, ‘bohemian’ waters of Germany and the Czech Republic, which are ideal for brewing Pilsners and Helles style beers. Low residual alkalinity and a sulfate to chloride ratio balanced towards sulfate make this an excellent choice for light colored and hop forward beers.

So to drill this back closer to home, the Gold Coast water is more closely aligned with this softer style water than Brisbane water. The soft Gold Coast tap water is very low in all minerals, which makes it a great starting point for manipulating it to brew all the different styles of beer. Brisbane water is ideal for brewing malty, dark beers and English Ales, but if we were to use the Brisbane water ‘as-is’ for our hoppy beers such as Hornet IPA, they wouldn’t consistently reach the dry, ‘angry’ finish which is their hallmark.

To overcome the issue of variances in water chemistry relative to location, brewers have a number of tools at their disposal to ’tweak’ the water (a lot of which we went into in the original article on water chemistry).

It’s relatively easy to add minerals and elements to water but it’s a bit harder to strip water of such compounds, so the long term solution is to have a water filtration system in place to most effectively tweak the water to be conducive to the style of beer you are brewing.

There’s different ways to filter water for brewing purposes, for example cartridge filters. The system we are using to purify our water will take place through a process of reverse osmosis.

A reverse osmosis filtration system is the best solution for stripping dissolved solids and minerals such as chloride from water in order to change water chemistry to get pure H2O readings. This can be tailored depending on the level of filtration used.

The first few beers we decided to brew in Brisbane were pale hoppy beers, and as our previous investigations had confirmed, the higher chloride to sulfate ratio in the Brisbane water didn’t lend itself to bringing out the hoppy flavours we have as our benchmark for our IPA’s and Pale Ales.

And as we didn’t have our reverse osmosis filtration system (required to tweak our water) set up yet (which we go into further below), we needed to come up with a short term fix. So we got crafty and trucked water from our Gold Coast sites and pumped them into our water tanks in Brisbane. It was a bit of a logistical challenge to organise the water trucks and pump the water in and out of the containers, but we managed it, and this allowed us to use water that we knew would be conducive to bringing out the required flavours for these styles of beer. In saying that though, we didn’t have to undertake too many extra trips up the highway, as we have a lot of vans travelling between the sites on a weekly basis anyway.

In a way it was almost poetic – using our Gold Coast water to brew our first Brisbane beers, infusing them with the heart of HQ.

We now have our own Reverse Osmosis (RO) system mounted permanently at our Brisbane brewery. We originally bought it when we went through a short term phase of brewing seltzers, which required very specific water chemistry.

There was a lot of work required to set it up; we had to get a holding tank in, there was plumbing required, we had to order pumps and establish what filter we wanted for it and we had to find a spot to mount it. So rather than rush the set up, we reverted to trucking the water from the Gold Coast, as mentioned earlier.

While vital for our brewing process in Brisbane, RO systems do have a few downsides. They are quite expensive and require a fair bit of storage space. Another issue is that the flow rates through them are too slow to keep up with the amount of water required in real time during the brewing process. To overcome this we’ve installed a 5000 litre holding tank that our RO filter keeps topping up, so that we have a constant supply of filtered water.

We run our Reverse Osmosis Filtration system to strip our Brisbane brewing water back to more neutral H2O levels, ready to adjust its sulfate and chloride ratios (as well as a few other important key metrics), depending on the style of beer we’re brewing, to get our chemistry to a standard that suits our brewing needs.

Keeping on top of the water chemistry paradigm

While we continue to bed down our processes at the Brisbane brewery we’re paying extra attention to our water chemistry. Water chemistry is never an exact science and many variables can come into play, which makes it hard work to keep things perfect. Stripping a lot of the ions out of the water to make it become more ‘soft’ also involves a more rigorous chemical altering process to nail your final target levels.

Myself and our Brisbane Head Brewer Mick are rigorously testing aspects such as our pH levels every week to make sure we’re consistently hitting our targets.

Our Quality Lab is our ‘double check’ at the end of the brewing process to make sure we nailed our levels in the brewing phase.

And last but not least, the biggest results that we are seeing are not just with our pH levels or in the lab but in our sensory program, where our flavour outcomes are improving and our sensory scores are getting higher each week. And after all this science talk, the fundamental reason we put all this effort in is to brew the best tasting beer that we can for our consumers.