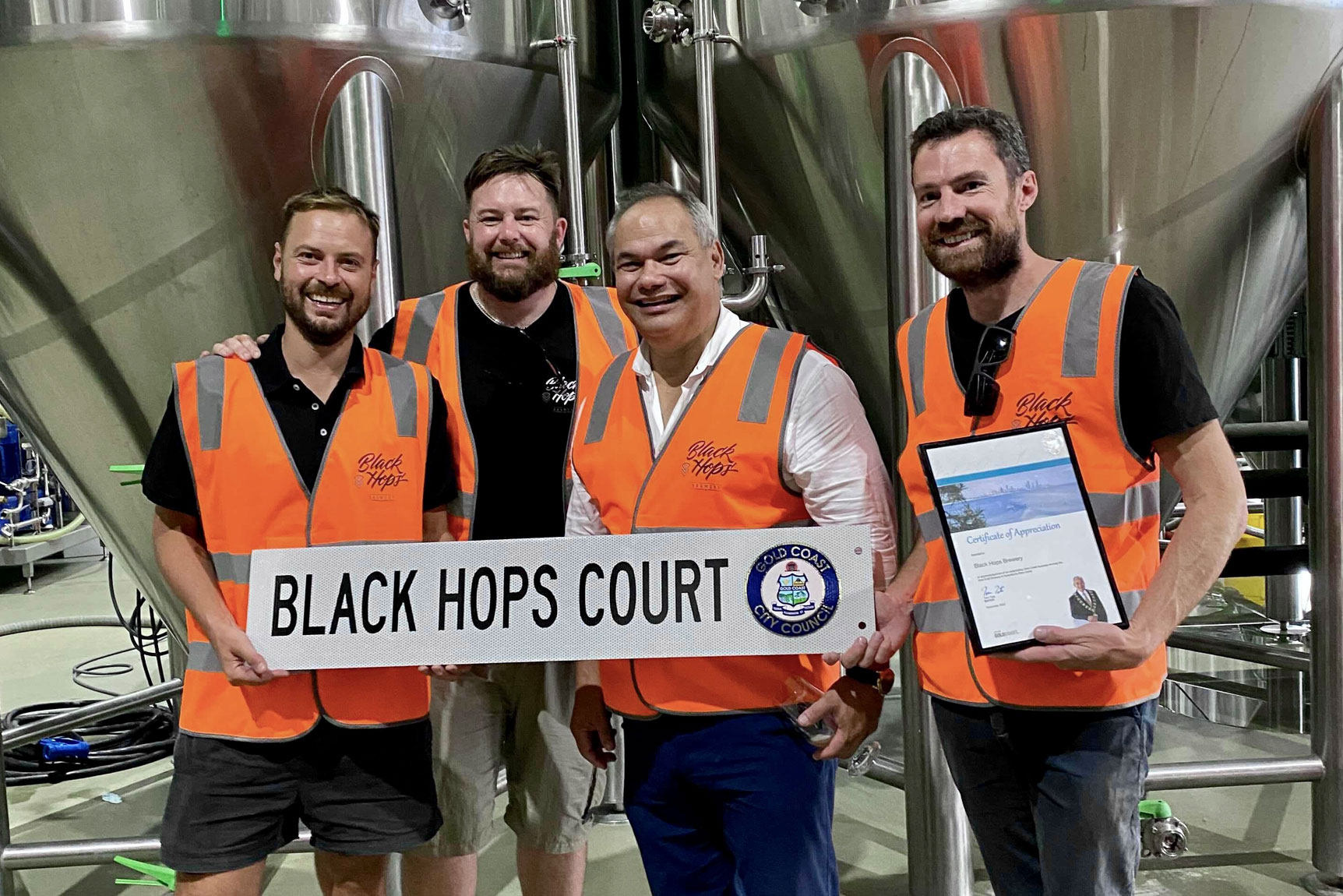 This page is set up to give media outlets quick access to our story, our branding materials and our photos. Please direct any media enquiries to the Chair Force at beer@blackhops.com.au or 0435 830 466.

Click this link to bring up our logo files. You are free to use our logo but please don’t modify it.

Here is a link to our photo directory where you will find all of our photos. Feel free to use them for any press opportunities.

Here are direct links to some of the more commonly sought after pics:

Black Hops Brewing is 3 mates making craft beer and sharing everything they learn along the way. After discussing a concept over beer at the pub, Dan, Eddie and Govs set off to make their first beer, the Eggnog Stout. Once the pilot brew batch was out, their attention quickly turned to doing a proper commercial brew. Within a few months they had their Eggnog Stout out in bars and got to work on building their own brewery on the Gold Coast.

In 2015, they brewed the world’s first official Call of Duty beer, a Midnight Pale Ale. In 2016, they successfully raised $17,000 via a crowdfunding campaign to become the first Aussie brewery to launch via crowdfunding. They opened the doors to their own brewery and taproom in Burleigh Heads in June 2016 situated within walking distance of the iconic Burleigh Beach.

Black Hops was awarded 5 Gold Medals at the 2018 Australian International Beer Awards in Melbourne, as well as the coveted trophies of Champion Belgian Style Ale for Beach House and Champion Small Australian Brewery.

In 2019 Black Hops became the first Australian brewery to close an equity crowdfunding campaign and the first company to hit their maximum target. Over 500 investors invested a total of $400,000 in just 6 days to help fund the build of their second brewery, Black Hops II. In March 2019 the brewery and taproom was launched, the first of its kind on the north end of the Gold Coast. The new brewery is one of the biggest independently owned breweries in Queensland featuring a 60 Hectolitre brew house and 180 hectolitre fermenters.

In May 2019 Black Hops were awarded a Champion Beer Trophy for their Mid Range mid strength Pale Ale at the Australian International Beer Awards (AIBA’s), which is the largest annual draft and packaged beer competition in the world. They also took out 3 Gold Medals and 4 Silver Medals for their beers.

On 26 December 2019 the Black Hops logo was hoisted on the spinnaker of KatWinChar, a yacht which competed in the Sydney To Hobart yacht race. Black Hops also brewed a limited edition KatWinChar Pale Ale to commemorate the event.

In mid 2020 Black Hops started the process of launching a new brand of barrel-aged beer under the name AWOL. The new facility and taproom would sit in Hibiscus Haven in a new location at the back of the Burleigh site, with an opening date planned for early 2021.

In November 2020 Black Hops acquired an East Brisbane-based brewery previously known as Semi Pro Brewing. After a rapid 10-day makeover they re-opened it as Black Hops Brisbane and their 3rd brewery and taproom.

In addition to making beer Black Hops is a passionate supporter of charity and community organisations, supporting at least one different cause each month via its community program.

They continue to share everything they learn via their blog, social media, podcast and even released a book, Operation Brewery.

Black Hops Brewing started as 3 mates making beer and sharing everything along the way. In 2014, Dan, Eddie and Govs made their first beer, the Eggnog Stout, after discussing the concept at the pub. That led them to opening up a brewery and taproom in Burleigh Heads in 2016 and in March 2019 they opened a bigger production brewery and taproom in Biggera Waters.

These days Black Hops is one of Australia’s highest rated and fastest growing breweries. We distribute beer to thousands of venues across Australia and we are just getting started. With a team of over 70, we believe we have the best team in the industry. All of us have a great work ethic and are passionate about craft beer and the Black Hops brand.

Black Hops started as a simple idea over a beer with 3 good mates Dan, Eddie and Govs. That lead to the first Black Hops beer, the Eggnog Stout. Their award-winning beers are unpasteurised and made with no preservatives.

Each Taproom has a selection of 16 beers on tap and in takeaways cans and cartons, so there’s sure to be a beer for every palate.

The taprooms also cater for non beer drinkers with a permanent tap of Ginger Cider.