On Thursday, 17 and Friday 18 May, Eddie, Govs and myself headed down to Melbourne to represent Black Hops at two of the biggest events on the Oz beer calendar, the AIBA’s and GABS.

For the last 4 years we’ve gone down to GABS and the last 3, to the AIBA awards. This year we made a strong effort preparing and submitting beers for the awards, so we are excited and a bit anxious about how it would go.

Here’s what we got up to on our 2018 Melbourne mission.

After the mandatory Balters at the Gold Coast airport and a few red wines on the plane, we landed, reasonably enthused, in Melbourne at around 9am. We headed our to Reservoir to check out one of the larger breweries down there, Hawkers Brewery.

Eddie, me, Marzen and Govs (not in order of enthusiasm as it appears)

The founder Marzen Hajjar was extremely generous with his time, showing us around his impressive brewery and helping us understand what a brewery looks like at a much larger scale than ours. He even wore his AIBA awards outfit as he took us on a tour of the large facility.

We even did some whiteboarding in the boardroom but after a few 9% DIIPAs, I think I was the only one left excited to be talking about Google Docs.

From there we headed back to the hotel to begin our annual process of putting on long pants and collared shirts. 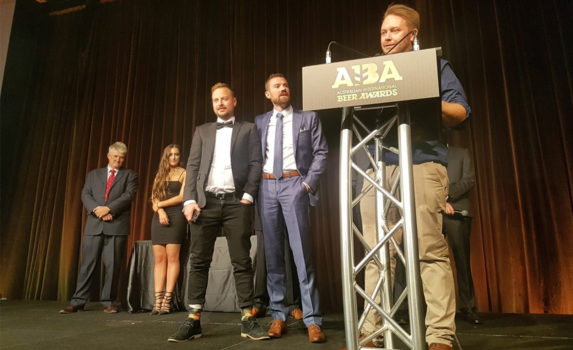 We were so organised this year, we actually arrived at the AIBAs about 20 minutes early, walking into a room filled with people preparing the tables. Eventually everyone else caught up, and we took our seats in anticipating of a big night.

The AIBA’s, which have been going for over 25 years, is the largest annual beer competition in the world, celebrating excellence in brewing, beer packaging design and beer media. In previous years we have submitted a few beers, as well as entries for the media award and packaging award, even getting a gold in 2017 for our Pale Ale packaging. This year we focused 100% on the beer and submitted 9 of our beers for awards.

It’s fair to say that this year was a big success for us, with 5 gold medals and 2 trophies, one being Champion Small Australian Brewery.

In the words of Govs: “We set ourselves a goal to do better than last year, to win Champion Small Brewery is an absolute testament to the entire Black Hops family and all the hard work we all put in every day. It was a massive win for the Queensland beer community, with Green Beacon taking out Champion Medium Brewery.”

We went into detail about the AIBA results and backstory here.

The next day, after tasting some of the medal-winning AIBA beers at the Transit Rooftop Bar in Federation Square, we headed to the Great Australasian Beer SpecTAPular (GABS) for our 4th year running.

As well as being a kick arse beer, cider and food festival, it’s also an opportunity for craft brewers from all over Australia to showcase one-off, creative beer recipes.

We have a history of coming up with unique beer creations for GABS, and this year we concocted a Sangria Saison, which we christened Trolley’d In Tijuana. It got a very positive reception and slotted in nicely next to our previous years’ entries, which we’re bringing back in a big way this coming Saturday at the Taproom!

It was great to hang out with some industry friends as well as beer drinkers who have been following our story. We celebrated hard and true, Govs in particular enjoying the double digit offerings of some of our craft beer brethren, before successfully ringing the bell to close out proceedings. It was a mammoth effort, one that required some rest at the next venue, The Fitzroy Pinacle where we enjoyed Code Red on the sofa beds near the fire.

That night we headed out and hit up some of Melbourne’s popular beer spots including Foresters for a Garage Project tap takeover and Beer Mash among others. Melbourne REALLY knows how to beer, and every year it gets better and better.

Not to be outdone, the team back home got into their own celebrations.

Saturday we got up early and headed to Stomping Ground Brewery and Beer Hall. So early that we were there for about an hour before opening, an experience accompanied by a strange feeling of déjà vu.

Stomping ground is an amazing venue, and is at the pinnacle of what Australia has to offer when it comes to Brew Pubs. It’s also a solid brewery with a nice new rotary canning machine, which we were able to check out on the tour.

The beers were tasting great too and it was an ideal way to spend our last few hours in Melbourne enjoying beers with friends from Freemantle Brewing, Ballistic and Newstead.

All in all, it was an epic trip and once again a highlight of our year.

In celebration of all things GABS, we’ve decided to go ‘back to the future’ and brew limited runs of all of our previous GABS beers, which we’ll launch at a special ‘homegrown’ version of GABS at the Black Hops Taproom from 12 midday – 6pm this Saturday, 26 May!

Here’s what we’ll have for you:

They’ve all been freshly brewed on our Recon pilot system. Here is the Facebook event link to learn more.

Be sure to follow us on Instagram for all the latest from the world of Black Hops.