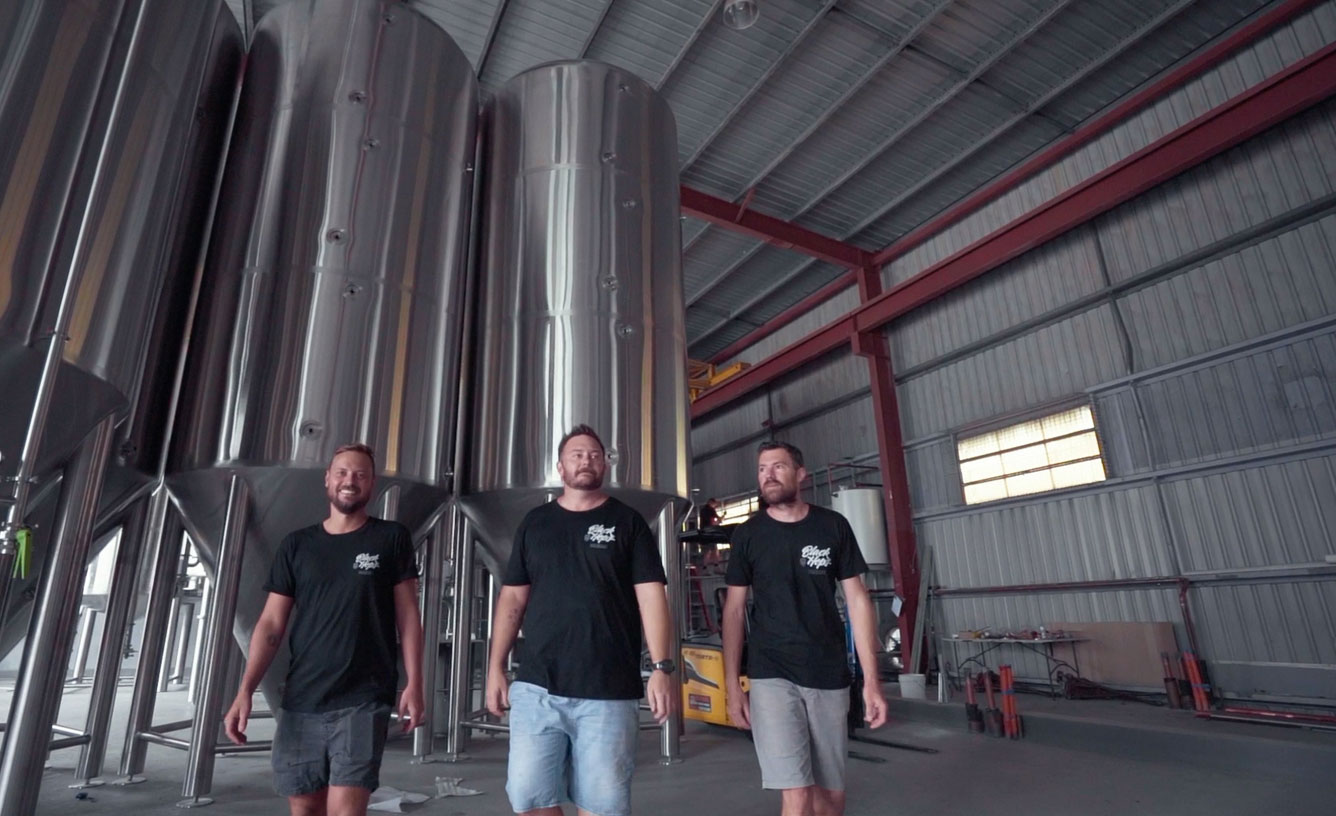 Situated at the northern end of the Gold Coast, at 14 / 665 Pine Ridge Road Biggera Waters, Black Hops II will complement the original Black Hops brewery and taproom, which opened in June 2016 in Burleigh Heads and will continue to operate in conjunction with the new brewery.

The launch of a second Black Hops brewery on the Gold Coast is the culmination of an intensive period of growth for the company. Having built an ever-growing following in the local market and beyond, the timing was perfect for Black Hops to expand their presence and brewing capacity as they look to meet the burgeoning demand for their beer throughout Australia. To help fund the new brewery, Black Hops recently undertook a record breaking equity crowdfunding campaign on the Birchal platform, raising $400,000 in just six days.

The Black Hops brainstrust, Gold Coast beer aficionados Dan Norris, Eddie Oldfield and Michael ‘Govs’ McGovern, are excited by the opportunities that the launch of a second Black Hops brewery will bring. Says Dan: “The new brewery is going to be our full scale production brewery, which will expand our volume from 600,000 litres per year to potentially multiple millions per year. While we won’t hit that target immediately, we wanted to factor in some heavy duty upscaling opportunities to meet our longer term goals.”

As well as upscaling production, the new brewery, with its custom-designed 150 sqm taproom, will also provide Northern Gold Coast residents with a vibrant new locale right on their doorstep, catering for beer tasting and takeaways and brewery tours. Says Eddie; “Our original Burleigh brewery and taproom has evolved into a hub for like minded people to hang out, drink fresh beer and feel connected to their local scene. With Black Hops II we hope to create a similar vibe for Northern Gold Coast residents.”

The new Black Hops II brewery in Biggera Waters will be officially opening its doors to the public on Saturday, 2 March from 12pm to 6pm. There will be 14 beers on tap, including core favourites such as Pale Ale, Hornet IPA and Eggnog Stout, Black Hops’ original flagship beer.

To celebrate the official opening, some limited release beers will also be pouring, including Danger Zone (an Imperial Red Ale), Thunder Cloud (a hazy Triple IPA) and Kiwi Lager (an Imperial Lager). Takeaways will also be available.

Little Havana will have their food truck onsite, so be sure to come along and be one of the first to partake in the Black Hops II experience.

Black Hops Brewing, billed as the least covert operation in brewing, is 3 mates making craft beer and sharing everything they learn along the way. After discussing a concept over a beer at the pub in 2014, Dan, Eddie and Govs set off to make their first beer, the Eggnog Stout. Once the pilot brew batch was out, their attention quickly turned to doing a proper commercial brew. Within a few months they had their Eggnog Stout out in bars and got to work on building their own brewery.

In 2015, they brewed the world’s first official Call of Duty beer, a Midnight Pale Ale. In 2016, they successfully raised $17,000 via a crowdfunding campaign to become the first Aussie brewery to launch via crowdfunding. They opened the doors to their original brewery and taproom in Burleigh Heads, on the Gold Coast, in June 2016.

Since then, Black Hops has gone from strength to strength, rapidly expanding into over 400 venues and retail outlets including Dan Murphys and BWS stores, and winning a swag of industry awards along the way. This culminated in Black Hops taking out the prestigious ‘Champion Small Australian Brewery’ award at the 2018 AIBAs.

The launch of a second Black Hops brewery on the Gold Coast signals an exciting new phase in the growth of Black Hops as a major player on the Australian craft beer landscape.

To help fund the new brewery, a highly successful equity crowdfunding was rolled out, which delivered a number of landmark achievements: