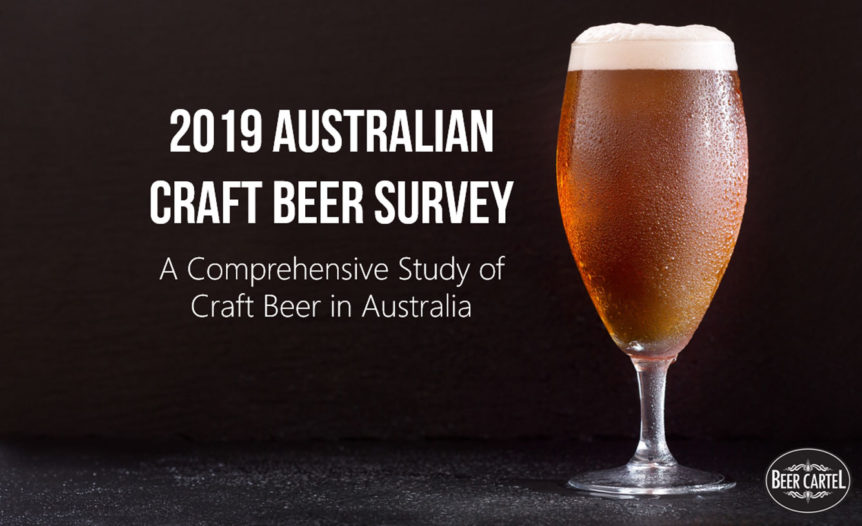 The annual Beer Cartel Australian Craft Beer Survey has just been released, and in this post I’ll run through some of the results with some extra commentary. I’ve always loved seeing the data from this survey and this year is no exception. Let’s dive in. First off some links:

Since the launch of the Independent Seal last year there has been a few questions in the survey around independence. Last year the awareness of the seal was sitting at 33% after it only launched a few months prior and this year it’s sitting at 41%. It’s great to see this going up, it still feels a bit low and has a long way to go. More brewers using it on their packaging will help a lot. We started using the seal on our packaging this year and have noticed lots of breweries now using it. The IBA have also released a supporter seal for venues, which will raise awareness further. And next Saturday 26 October is the first Indie Beer Day which will help too.

The survey also found that 58% agreed the seal would have a medium or large influence on their purchasing decision. This was actually a decrease from the year before, indicating that possibly people aren’t as fiercely independent as they once were. Another question in the survey seems to back this up showing more people saying they don’t care who owns a brewery than those who do.

That question wasn’t asked specifically last year, but to me it feels like there’s been a bit of a trend to continue supporting breweries who sell to the majors, as long as the beer is good. Whereas in the past there would be a groundswell of boycotting brands who sold out.

This one is an interesting one to us particularly since we have just moved to 16 packs for all of our beers.

I think any question that asks someone about what they would hypothetically do in a purchasing situation needs to be interpreted with caution. I’ve found consistently that what people say they will buy and what they actually buy are often 2 different things.

When we moved to 16 packs we did have a few people say they preferred the old 24 pack format, however this wasn’t supported in the actual purchasing data. In a comparable month after the move, we sold twice as much beer in full cartons than we did prior to the move.

And even in this survey I think the response to this question is a bit inconsistent with other questions. In particular the average weekly spend on beer being $56 and only 9% spending more than $100 per week on beer. I just don’t see a lot of evidence that there are that many people buying $90 cartons of craft beer.

In terms of a reason for the discrepancy I think it’s to do with 16 packs being a relatively new thing and that change is taking a while to show in the data. This can be seen with the cans vs bottles question over the years. Every year before now, bottles have been preferred over cans in the survey, however craft breweries have known for quite a few years that cans are by far the preferred format for craft beer drinkers, to the point where most new breweries don’t put their beer into bottles at all. On that topic, let’s look at those results.

Ever since I started reviewing the survey results, I’ve waited for cans to overtake bottles as the preferred format. It seemed like a stat that hadn’t caught up to what was going on in the industry. For us, since we opened in 2016 we’ve had cans as our preferred format. It wasn’t until 2017 that we could get our beer into cans with the launching of a local mobile canning operator, but it felt to us that there was a huge trend moving towards cans.

In 2019 it’s not much of a debate anymore. Most new breweries put their beer exclusively into cans, most bottle shops have fridge after fridge of cans and most of the major brewers who have very good reasons to stick with bottles, have moved into canning as well.

This list is always interesting, we were really stoked to come in at 10th in the 2018 survey and were hoping for a big improvement this year after growing a lot in the 12 month period.

This year Balter took out the top spot for the second year running and we were stoked to come in at 5th. This is an amazing list to be part of and we feel like we are punching well above our weight to be in that elite company.

It’s also interesting to see some of the acquired brewers in the list. In years past they have dropped pretty far off the radar in fan-voted lists like this, but like I mentioned above, I feel like this trend is turning a little bit.

We were also stoked to come in at 3rd on the list of Queensland’s favourite brewery venues.

I’d say very few people would be surprised by the results of this one, GABS is Australia’s favourite beer festival with around 3X as many votes as the next best. We’ve been heading to GABS since well before we built the brewery and it’s a special event that keeps getting better ever year.

This is always an interesting one for me to look at as someone who runs a craft beer blog. Once again this year Crafty Pint took out the top spot with more than double the readers of the next best Aus Brews News. Brews news did make a big leap up from 4th last year however.

It was also great to see some new entries in this list like The Beer Healer who is predominantly podcast based.

The beers styles question is always an interesting one to look at as well. In Australia in every year so far Pale Ale has sat above IPA as the preferred style by around 10%. In the USA IPA is the most popular style so it’s interesting to watch and see if the same thing happens here. It does look to be heading in that direction with this year Pale Ale dropping by 4% and IPA increasing by 2% to the point where there was only a 5 point difference between the 2 (81% for IPA and 86% for Pale Ale).

NEIPA was also added to the list this year and sits at 57%, it will be interested to see the trends of that style come next year.

Sour didn’t even make the list but it was asked in the survey which I find strange. I would have thought sours would be pretty high up the list. I’ve reached out to Beer Cartel to find out what the number was for sour beers.

A few other observations:

Cheers to Beer Cartel for putting together, I’m sure it’s a huge amount of work. They also put together brewery-specific feedback as a service to breweries which gives us more useful data to dive into. If you want to chat about the survey results, check out the Black Hops Ambassador Facebook Group here.