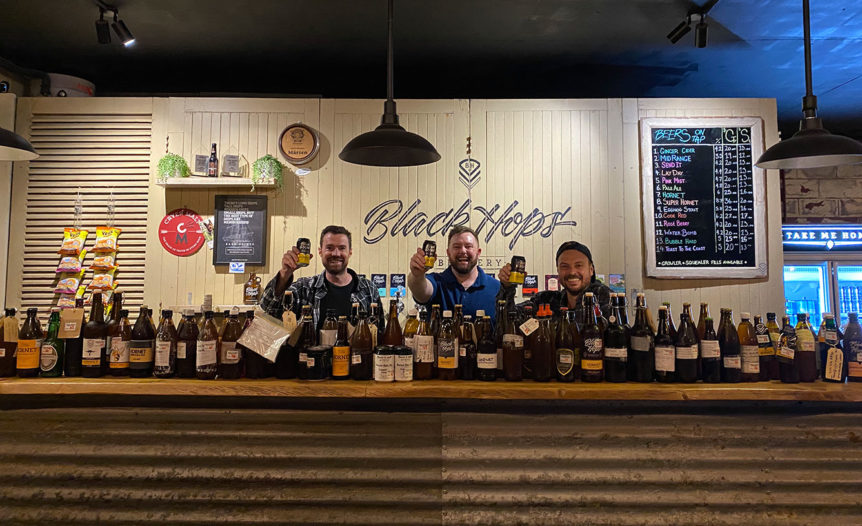 On Friday, 29 May the official judging took place for the first round of our Black Hops Reserves Brew At Home Comp.

We received 75 entries for our Round 1 beer, Hornet IPA. Our judging panel had a lot of fun sampling the entries and awarding rankings, based on our true to brand guidelines.

Congratulations to all our entrants, we were stoked with the amount of entries.

How the judging worked

We treated this comp like a proper brewing competition with judges broken up into various tables, stewards handling the delivery of the beers and collation of the scores and proper judging sheets for the judges. Govs was running the session, Eddie was chief Steward and Dan looked after data entry. The rest of the stewards and judges were Black hops staff members who volunteered their time to help with the comp.

As part of the comp we put up Black Hops reserves gold medal badges, free Hornet cans and a 20% discount on Hornet for the whole year for the winner.

In the end there were 6 gold medal beers judged:

All gold medal winners got a 4 pack of Hornet and a limited run Black Hops Reserves gold medal pin (still in production).

The fight for the top spot was tight but in the end the Hornet Black Hops Reserve Champion Award went to Nick Fullerton & Dave Claughton. The winners got a Hornet Champion Coin, a gold medal pin, a carton of hornet and automatic entry into the end of year champion brew off.

We also thought it would be fun to give a prize to the best design since a lot of people made a strong effort to brand their entries. The packaging award goes to Steven Hayes who gets a 4 pack of Hornet.

The biggest issue with the beers Diacetyl

As part of our Round 1 Debrief, one important brewing tip we’d like to pass onto all Reservists relates to the presence of an unwanted organic compound known as diacetyl.

A number of otherwise great entries presented with this compound, bringing their overall scores down considerably. The good news is that you can easily nip it in the bud when you brew your next batch of Black Hops at home.

Here’s all the info you need to eliminate diacetyl.from your next batch of beer.

What is Diacetyl and what does it do to your beer?

Diacetyl is an organic compound (belonging to a group called ‘ketones’) that is a natural byproduct of fermentation and presents in beer as a buttery/butterscotch aroma and taste. Diacetyl is detectable at very low levels and overpowers hop character in pale hoppy beers.

Sometimes it can be missed because it’s not an overly offensive aroma, but is an aroma you don’t want present in most styles of beer and will take all the focus away from the hop aroma you tried so hard to embed in the beer.

How does it occur?

Diacetyl is produced during fermentation as a byproduct of valine synthesis, when yeast produces alpha-acetolactate, which escapes the cell and is spontaneously decarboxylated into diacetyl.

What can you do to reduce or eliminate it?

Follow these 4 easy steps to help keep diacetyl out of your beer..

How can you test for it?

And here’s a useful clip for doing a Diacetyl test without using fancy equipment, courtesy of our good mate in brewing, Steve ‘Hendo’ Henderson.

For those of you taking part in Round 2 of the Brew at Home Comp and giving Super Hornet a crack, keep these tips in mind and you’ll have every chance of being up there as a Gold Medal contender.

Our current live comp is for Super Hornet, with entries closing on Friday, 3 July. Following on from that, the Send It Session Ale Comp will be launching. If you want to be a part of it, join the Reserves email list here or join the Black Hops Ambassador group in Facebook.