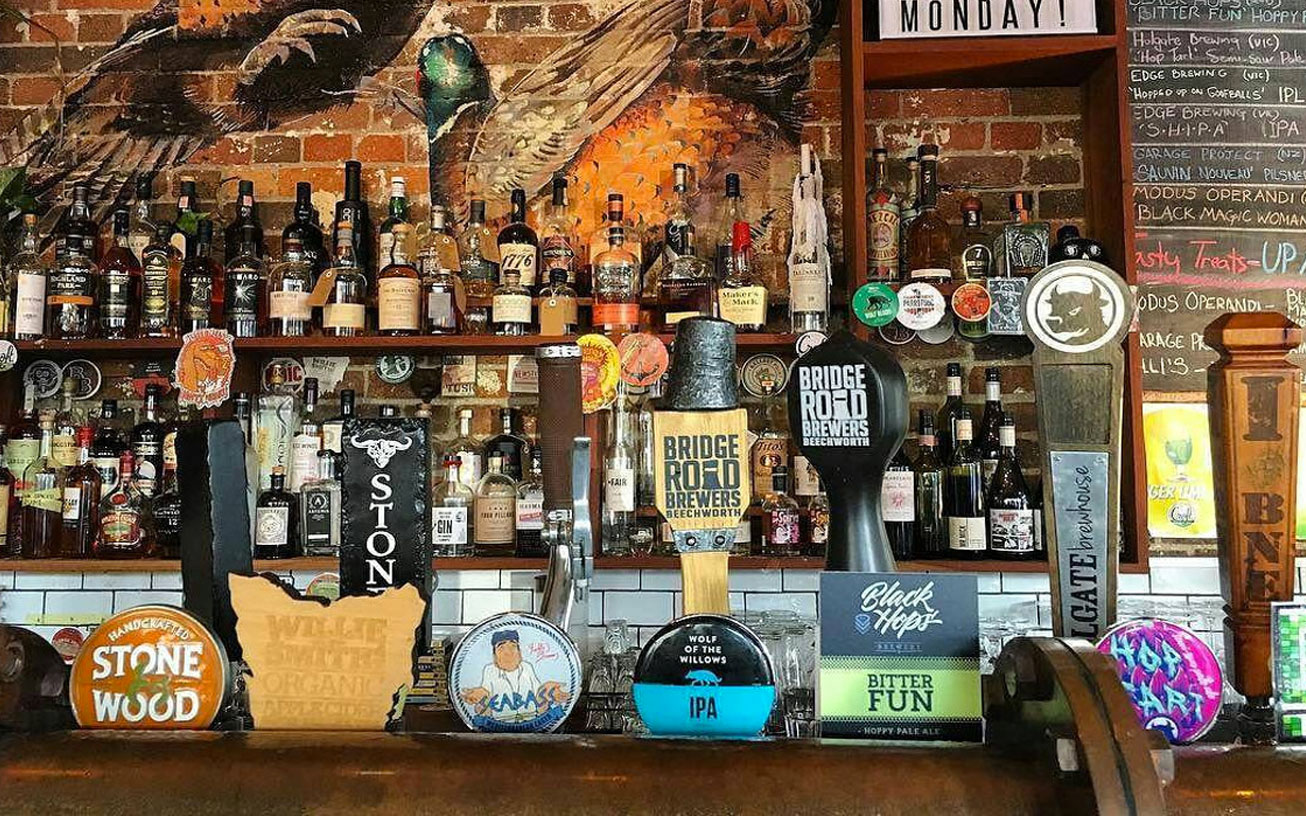 Those of us who love quality beer can often be limited for choice when it comes to drinking our favourites when we’re out. Yes we have more options now than five years ago, but it can still be frustrating taking your place at the bar and being confronted by a line of beer taps in varying shades of beige.

So how can you, as a beer loving consumer, influence what type of beer gets served at your local? Well one way is by not asking for ‘craft beer’ at all. Wtf I hear you say?! We’ll get to that a bit further on. First up though let’s look at why so many venues, especially the big ones, often seem to have a limited variety of beers on tap.

The power of the big breweries

One major reason is the influence of the major players in the Oz beer marketplace.

Right now in Australia the beer market is dominated by two major players. As of June 2016, Carlton United Breweries (CUB), whose parent company is SABMiller, have approximately 40% of the market share, while Lion, owned by Kirin, have around 43% of the market sewn up.

These two are like the Coles and Woolies of the beer world, and their dominant market share comes with a shitload of clout.

They’ve also tapped into the rapidly growing craft beer market, either producing their own versions of craft beer or buying out independent craft brewers by the dozen. And with this market share comes power in the form of dominance at the beer taps. 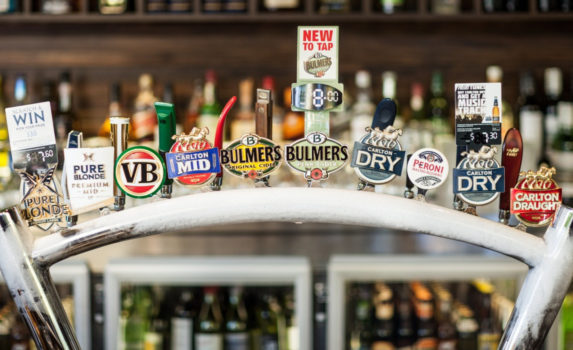 If you’re a fair dinkum craft beer drinker, you’re going to encounter some roadblocks in drinking local beer at your local. A big part of this is because the big breweries have the venues by the balls when it comes to what they can stock.

So called tap ‘real estate’ is hot property, and the major brewers monopolise the taps by offering publicans lucrative incentives to sign exclusivity deals. This means that the bar must stock the big breweries’ beers on the majority of their taps for a set timeframe. This may only leave one, or at best two, ‘floating taps’ for independent breweries to haggle over. They also, of course make beer at a scale where it’s significantly cheaper to make and they can beat local breweries on price fairly easily.

In return the breweries will provide a lot of value to the venue, either through paying for installing tap systems, big rebates on beer sales or any number of other incentives. In the end it makes it either impossible or just financially impractical for venues to sell anything else.

We’re not mad at it, we knew what we were getting ourselves in for, this is just how it is.

While this may sound grim, all is not lost. You as a paying customer can play a part in influencing the type of beer that venues serve.

So how exactly can you help drive beer choice? 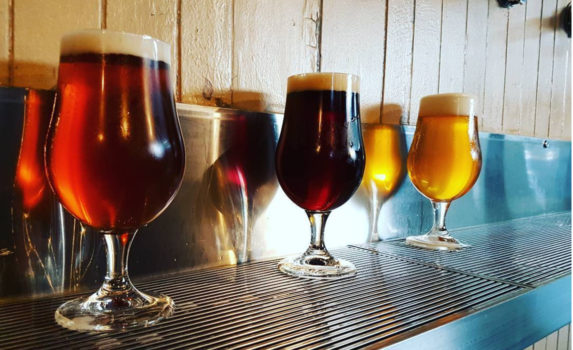 Now that the big breweries have jumped onboard the craft beer bandwagon, the boundaries between what is fresh, local beer and what is mass produced beer (often masquerading as craft beer) have become blurred.

We’re always frustrated when we see people walk into a bar and specifically ask for craft beer and get offered something that doesn’t taste much different to the big mainstream beers, isn’t made locally and by any definition is not craft beer. Patrons aren’t going to sit there and argue the definitions of craft beer, so we think there’s a better approach.

As often happens with anything that rises from a grass roots level into the mainstream, the true essence of what it originally stood for often becomes warped and morphs into something far removed from its origins. For us, the term ‘craft’ has become just another industry buzzword.

What we are more interested in at Black Hops is having good beer made by good people. It’s about fresh, recently brewed beer made locally and treated well. And interesting beer, made with the best ingredients and a little bit of creativity. This is the beer we drink, it’s the beer we make, we don’t have to call it craft, it’s just good beer. In the end it probably doesn’t matter too much if it’s ‘craft’ or not.

Related: How to make sure you are drinking fresh beer

If not craft, then what?

So how do you get around this? By asking for ‘craft’ beer in a different way.

One way could be to ask where it is brewed. If the bartender can’t answer this question, follow up with the bar or duty manager. Soon enough the venues will get the message that it’s important to know where the beer is made.

Ask for a beer made by a specific local brewery. Ask enough and they will get the message.

Ask for a specific breweries product. What’s your favourite IPA? Hornet of course haha! But whatever your favourite ale, stout, IPA or lager, if the venue you frequent doesn’t have it, ask for it specifically.

You could even ask for a beer in terms of it’s flavour/aroma/mouth feel. For example asking for a hoppy beer could be a good starting point. You could ask what hops are used in the beers. Venues who serve good beer are going to have to learn about ingredients. Go into just about every restaurant in California and you’ll get 6+ taps, most of them pouring local beer, with staff who know the beers backwards. That’s what we hope is coming here and we can do our part to bring it here by setting the standard expected by customers, of their beer serving venues.

Related: Craft beer bullshit: how to impress your mates with these top 10 jargon terms

But of course as already mentioned, the big breweries often have a major say over what beer venues can offer. So the purpose of these type of questions may simply be to let venues know that people are crying out for a greater variety of quality beer at the taps. It may not happen overnight, but if publicans hear about it often enough, maybe they’ll think twice about signing that exclusivity deal with CUB or Lion next time around. 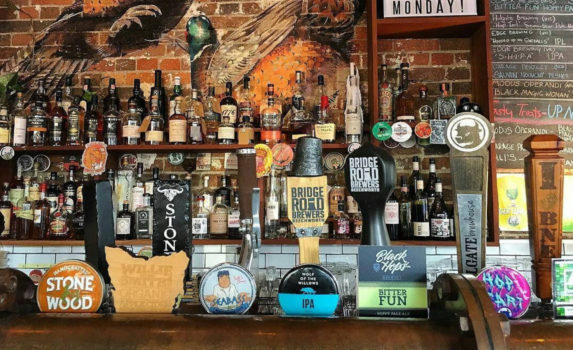 The smaller independent venues are the places to drink great beer for the most part. They are the ones pushing the industry forward and their customers are the ones screaming out for local, fresh and creative beer.

If you can go directly to the brewery that’s always good too. As well as supporting real-deal local brewers, you’ll also know that your beer should be fresh, stored correctly and at the right temperature, and will therefore taste exactly how it should.

We delved into how to make sure you are drinking fresh beer in a recent blog post.

Related: Where to drink Black Hops

If brewery ownership is something you want to educate yourself on, here is a list of a few well-known Aussie beer brands and who owns them.

A lot of these brands started out as independent brewers, before being bought out by one of the big breweries. Even Coles and Woolworths are producing their own versions of craft beers, with Steamrail Ale and Sail And Anchor respectively.

For us though it really comes down to the quality of the beer, rather than who owns the brewery that produces it. Mountain Goat started as a small scale microbrewery in Richmond, Victoria in 1997 and were purchased by Asahi in 2015. But this hasn’t changed the fact that they still make great beers and are great people, so we will continue to drink their beer. If the ownership isn’t important to you then don’t decide based on that, the proof is in how the beer tastes.

Vote with your feet

At the end of the day, you as a consumer have a choice as to who receives your hard earned beer bucks. If your regular watering hole are not interested (or not able to) supply the type of beer you want, it might be time to break your routine and check out other locales in your area that might be more aligned with your drinking tastes.

Here on the Gold Coast a stack of independent bars and venues are springing up all the time. And of course you’ll always be very welcome, with a range of fresh local beer to choose from, at the Black Hops taproom or any of the other local Gold Coast breweries. There is no better way to drink beer when it is made onsite, not transported, kept cold the whole time and tapped within days of being brewed.

We’d love to know in the comments what success you’ve had in getting your favourite beer served at your local and your thoughts on no longer asking for ‘craft’ beer.