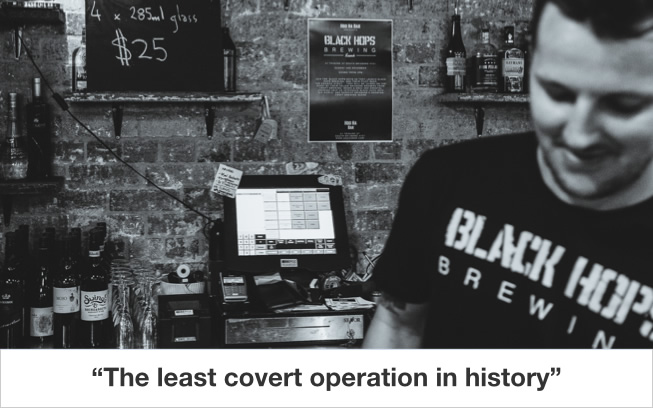 When we first set out to build a brewery, everyone told us we would need to raise some money. They also said it would be the least of our worries. The problem was, none of us had ever been involved in a business that had raised money before.

We were able to get the bulk of it together ourselves, but not enough .We needed outside funding.

If you’ve heard our first podcast episode (Operation Brewery #1), you’ll know we were able to get the funds together.

One thing that helped a lot was getting a decent pitch deck together. If you aren’t familiar with the term, it’s a presentation used when talking about your business to investors (pitching).

We used it in our early investor meetings and it gave us a good excuse to do some research and think about how we could present our idea.

Here’s the pitch deck we used. In the details below, we’ll break down every slide, why it was included and how it went.

The pitch deck Black Hops Brewing used to raise over $100,000 from blackhops

You can download a PDF here, the PowerPoint file here and the Keynote file here. 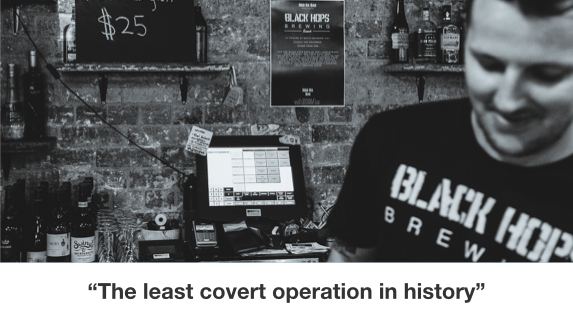 We started it off with a nice image and a quote given to us by a local beer blogger. This quote (or our since-revised version ‘The least covert operation in brewing’) has been a nice point of difference. The idea of the business being called ‘Black Hops’ and us going about it in a transparent way, sharing everything we learn along the way, was a good way to start. 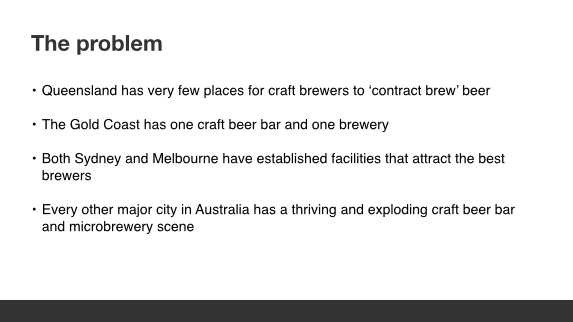 Most businesses are started to solve some sort of problem or take advantage of an opportunity. Investors want to know that you aren’t just doing this for fun, you are actually going after a gap in the market.

For us it was about taking advantage of the growth in the craft beer space, and the Gold Coast being yet to catch up to the other major cities. 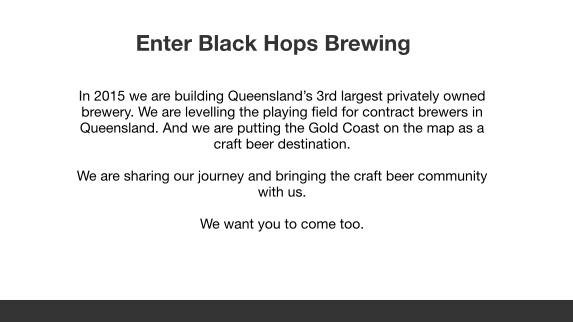 This is where we introduce Black Hops and what we are up to. At the time we were saying ‘Queensland’s 3rd largest privately owned brewery’. By the time we launch this probably won’t be the case, but it gave some idea of the opportunity. 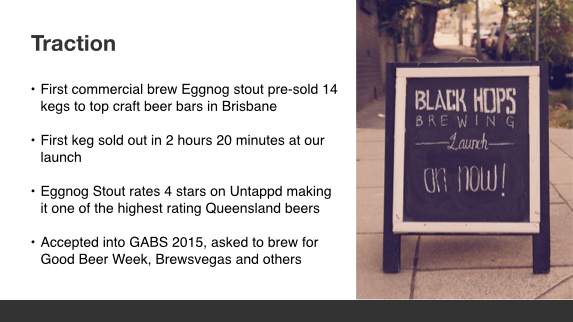 Investors want to get behind something that’s going well, so this is where we got into some of the traction in our brief history up until that point.

We kept that going on the next slide, with some comments from other people, about our first beer. It’s always a good idea to not just talk about your grand plans, but to show evidence that other people are also on board. 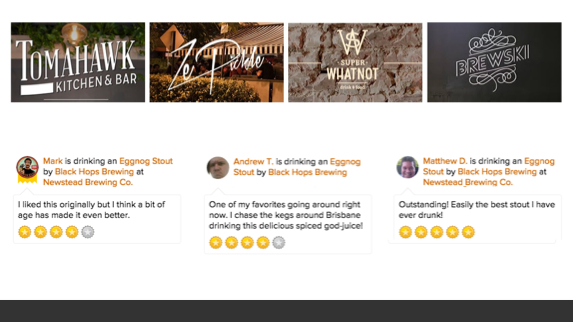 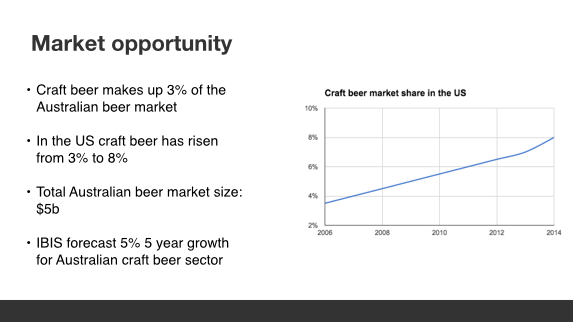 Of course investors ultimately are in it to make money, so we needed to show that there was good growth potential for what we were doing. We compared the craft beer scene in Australia to the early days of the U.S. when craft beer had similar market share (3%) and showed a chat of what happened in the years after. Obviously us and the investors think Australia is going to follow a similar trajectory and can see it happening already. 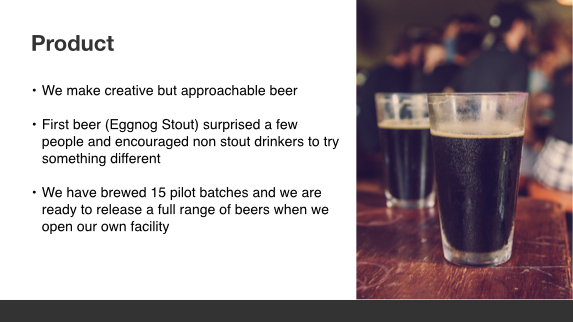 In this slide we spoke to the specifics of the beer we will be brewing. This included our first commercial beer but also the fact that we’d been busy brewing many pilot batches to arrive at a broader core range. You can learn more about our core range in our latest podcast episode, Black Hops Hits The Streets. 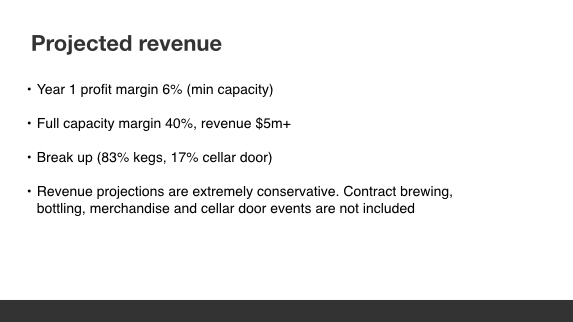 This one was a tricky one being so early on, we had to make some projections for revenue and start thinking about the break up of cellar door vs production beer.

Also a few things have changed since we put this one together, but this was our best guess at the time. We were initially thinking we would more or less break even the first year and we wanted to show what it would look like if we got the brewery size and location we wanted running at full capacity. We also provided detailed projections for every year that showed what we thought we would hit (as opposed to what could be our technical full capacity). 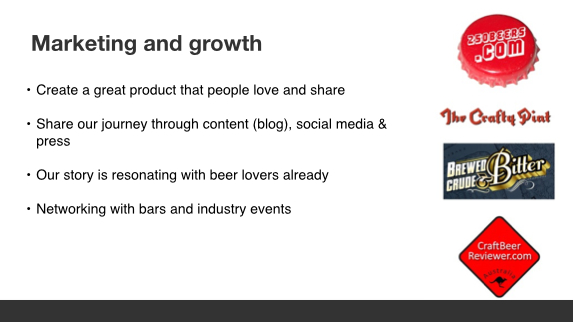 This is where we wanted to explain how we intended to grow the business. We feel like we have a bit of a point of difference in terms of how we are getting attention by sharing our journey and putting out content (blog, podcast etc). We also talked about networking and getting out there and building a community.

We are quite keen to build our business by creating a great product, building great networks and sharing our journey – not by paying lots of money in advertising or other costs. 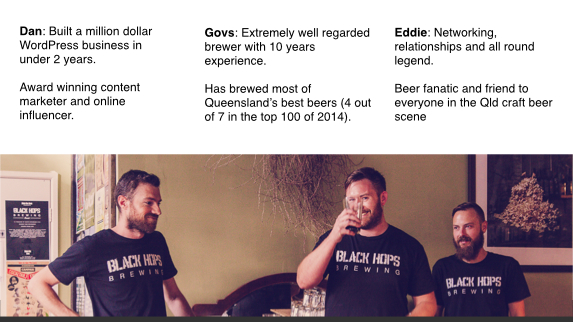 This is the slide where we spoke about our team. Investors want to know their money is in safe hands and the team has a good mix of skills needed to build a business. This included a technical product person (in our case a brewer, Govs), someone with business and marketing experience (Dan) and someone who can form the right relationships to get the beer into bars (Eddie). 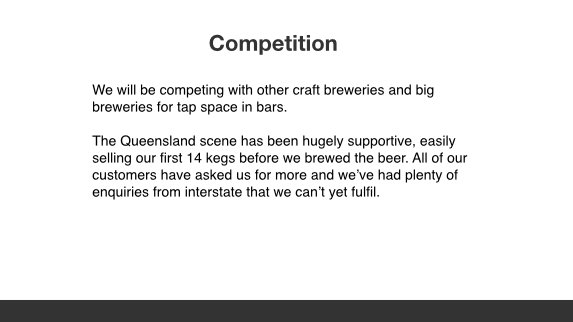 Businesses never exist in isolation so it’s useful to include a conversation about your competitors. The craft beer industry is pretty tight in Australia, and we generally see other brewers as colleagues not competitors. But we still needed to address the choices that customers have when it comes to buying beer and the choice bars have when it comes to purchasing kegs. 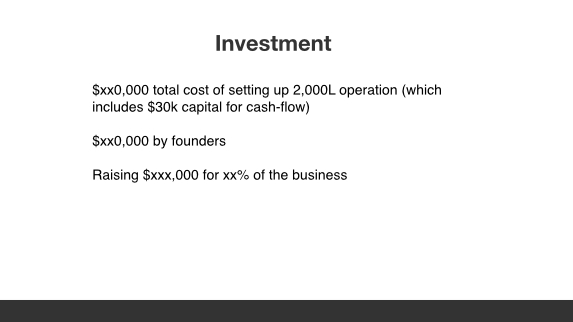 It’s important to have a firm idea of exactly how much you are looking for and what % equity you are prepared to give up for the investment. These numbers become your valuation which reflects how much the business / idea is worth to you. This will become something you negotiate (See this episode), but it’s a good starting point.

We feel we had a reasonably high valuation for something that didn’t yet exist, but we were all very confident in the idea and didn’t want to short change ourselves. We didn’t get exactly what we were after, but we weren’t too far off. The numbers have been removed from this slide to protect the investors involved. 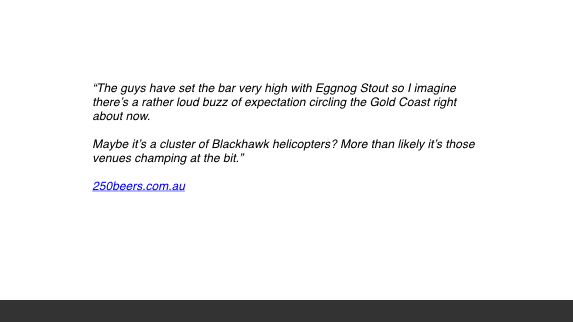 We finished the pitch deck off with a nice quote from our mate and respected beer blogger Darren Magin (aka 250 Beers). We felt this did a nice job of capturing the excitement about what we were doing. External validation is always good too, so it’s not just you talking about how good you are.

If you want to use this in your own business, you can download a PDF here, the PowerPoint file here and the Keynote file here.