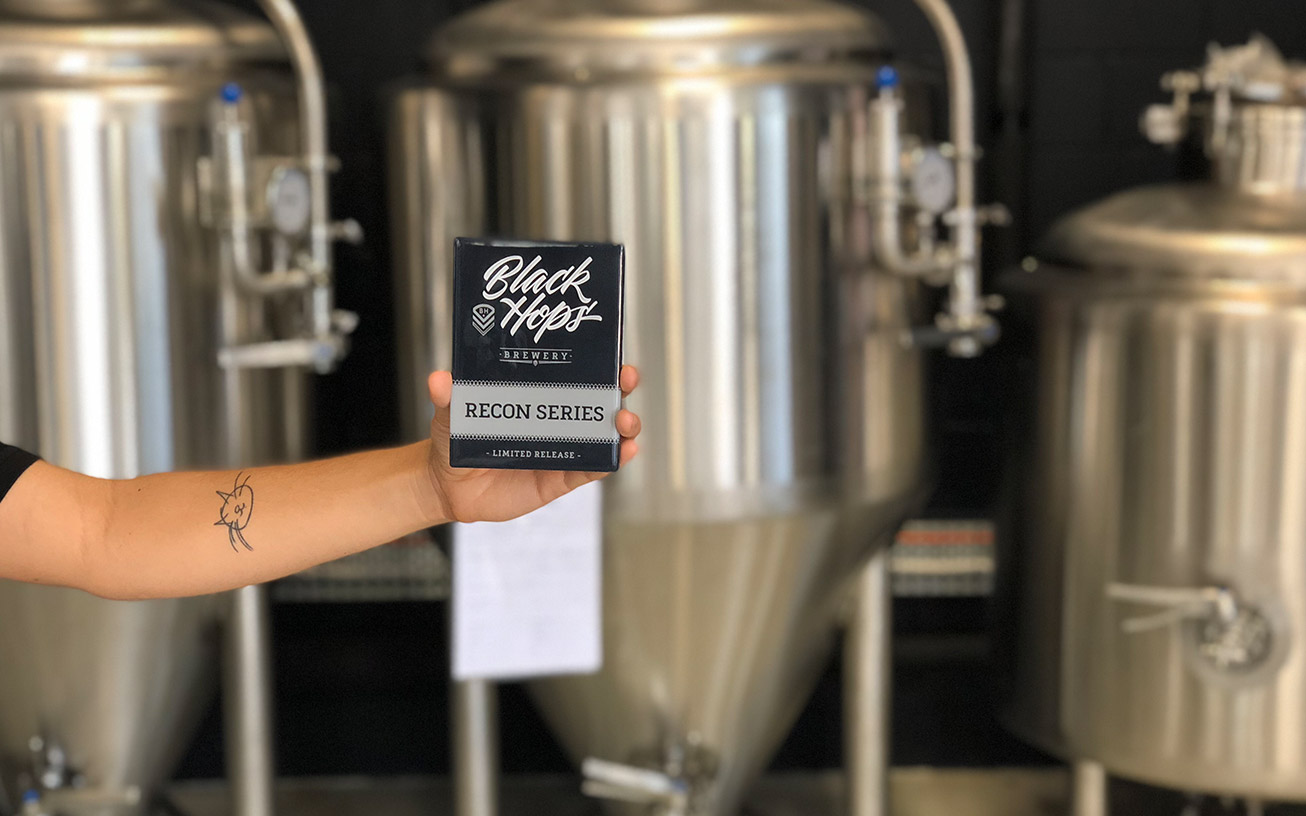 While our biggest sellers are our Pale Ale and IPA, Black Hops has always prided itself on pushing the boundaries when it comes to creative beers. In this article we’ll go through how we are approaching brewing some of our more interesting beers.

Our history of speciality beers 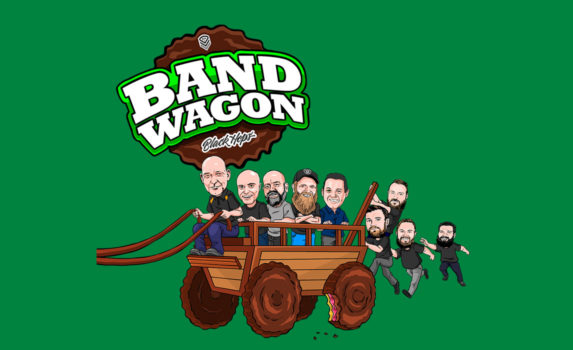 Our first pilot setup was a 3 vessel homemade system put together by Govs from 3 kegs. We then upgraded to a 120L BIAB single vessel, made by our good mate Moogs (a metal fabricator) from an old hot water system.

Both served us amazingly well. Our very first versions of most of our beers were brewed on Govs’ keg system; Eggnog Stout, Beach House, Code Red, ABC Bomb and more. Most of our recent festival speciality beers were brewed on the Moogs system, such as our ‘Assault Trifle’ sponge cake pale ale and our ‘Band Wagon‘ Wagon Wheel stout.

We’ve also collaborated with a bunch of other businesses. Our ‘Beetlejuice’ Black New England IPA (NEIPA), which we brewed in conjunction with The Scratch Bar, was a particular favourite. And in a ‘pinch me is this for real?’ moment, we were approached out of the blue by Activision to create the world’s first Call Of Duty themed beer.

This type of one-off, creative brewing was one of the things we loved the most, so in our recent equipment order to upgrade our tanks, we snuck in a 400L pilot system to take these brews to the next level. 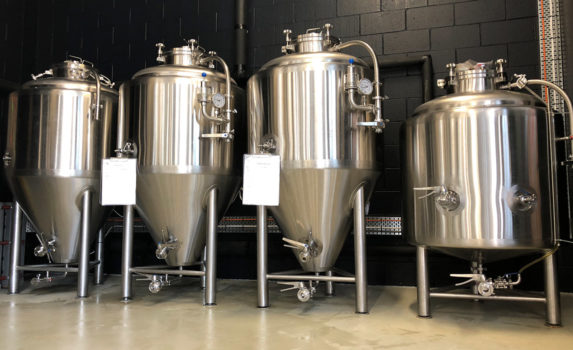 We opted to go with a new 200L 2-vessel pilot system with three 400L fermenters and a 400L bright tank, which lets us increase our volume of production at the smaller run scale (it takes the same time to brew 50L as it does to brews 5,000L.) The new set-up also comes with stainless conical fermenters, giving us more consistency. 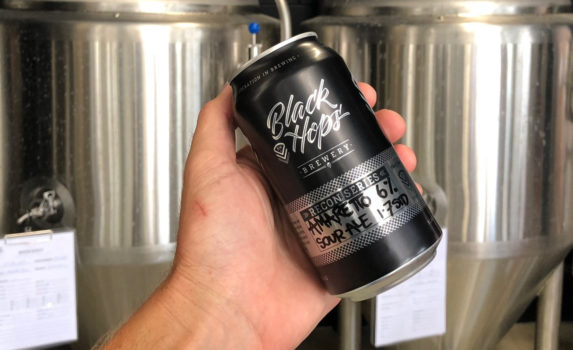 We also decided it would be a good idea to group these speciality beers under a name, hence the birth of the Recon Series. We brainstormed a lot of names but loved the military theme of Recon Series and thought it was a bit more interesting than the standard ‘pilot batch’.

We worked with designer Matt Vergotis to come up with a new decal and can design concept that would work specifically for these limited beers.

The decals will be shiny silver, clearly labelled ‘Recon Series’ with the beer names handwritten.

The cans will have generic shiny labels and we will be using the canning machine to print the beer names on the cans. This will let us can virtually any beer we make without re-printing labels.

The one in the image above has been handwritten (we don’t have our canning machine yet).

How we come up with Recon Series ideas

In the words of Govs, the process of coming up with ideas for speciality beers is a bit of an ‘expression session’ for the Black Hops crew. Ideas are regularly tossed around amongst the team. Some are tossed out, while others are workshopped, with ideas turning into recipes, and recipes turning into pilot batches.

Case in point, our soon to be released Amaretto Sour Ale. This one was all Eddie’s idea. He’s mad keen on Amaretto Sour cocktails and Amaretto liquor in general. He’s been known to add the stuff to his coffee in the morning!

Eddie can also lay claim to the original beer idea that was the genesis of Black Hops – Eggnog Stout. So he has a track record worth respecting. Once we were all onboard with the idea, Eddie and Govs worked out a recipe, and bartered their way into a large batch of Disaranno Amaretto..yes there was beer involved with hatching this transaction!

The other way we come up with adventurous new beers is by collaborating with compatible venues and other breweries who we like and trust. With our Yuzy Juice (another one from our initial Recon Series), our friends at the Backbone Bar were looking for a unique beer to celebrate their first birthday. Because we have a good relationship with them we were more than happy to help. With their strong focus on Asian cuisine, the idea of creating a New England style Pale Ale infused with Japanese grapefruit (yuzu) came together.

Beery brainwaves and serendipitous collaborations. This probably sums up best how we go about birthing our creative beer range.

Once we set up the new pilot system, it was time to let our creative impulses run wild and come up with even more beer recipes that fit the ‘different but drinkable’ manifesto. 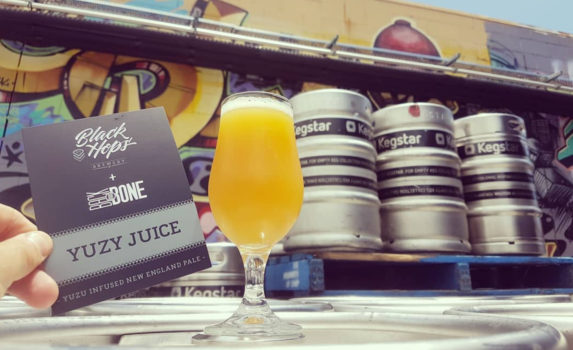 This is a Recon Series collab beer that we recently did in conjunction with the Backbone Bar and Kitchen in Tugun. It’s a yuzu (Japanese grapefruit) infused New England style Pale Ale with a hazy, tropical hue. 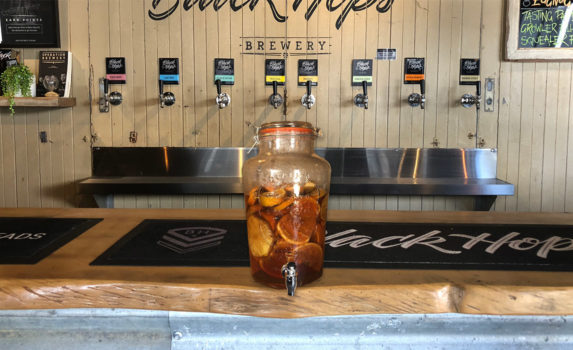 We’re currently working on a citrus, pineapple and Mount Gay rum infused IPA, which we’ve christened the Caribbean Crusher IPA. We’re doing this as a collab with Dirty Moes on the Sunshine Coast, who will be launching it on 25 February. We’ll also be pouring it at the Taproom.

Our next exclusively Black Hops creation will be an Amaretto Sour Ale.

Expect to see plenty more from the Recon Series over the coming year. Here’s a sneak-peek at a few ideas that Govs is currently looking at bringing to the taps soon.

As mentioned earlier, even for experimental beers like these, we still make sure they are approachable and drinkable enough to be served at bars.

If you’ve got an idea for an out-there but drinkable speciality beer be sure to let us know!