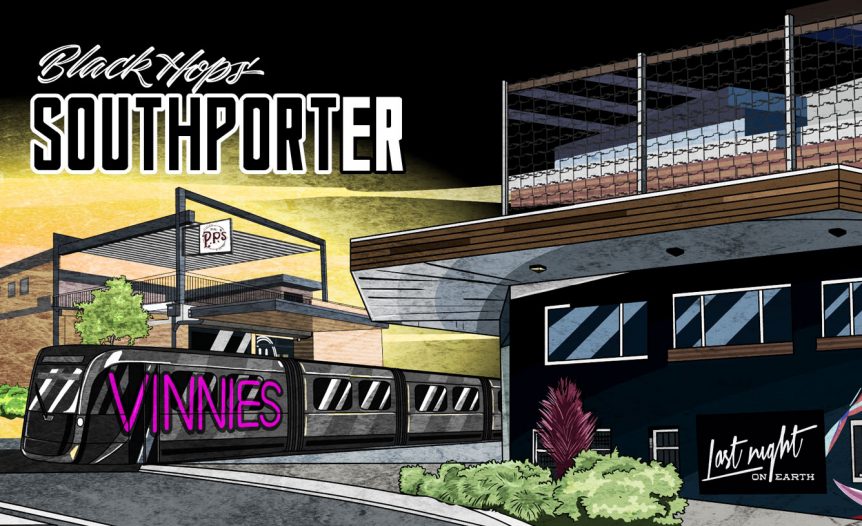 Gold Coast independent craft brewery, Black Hops, recently crowned Champion Brewery at the Royal Queensland Food and Wine Show Beer Awards, have been rapidly building their reputation as a quality brewer of experimental beers, making on average one unique new beer a week over the last 12 months. Sitting alongside their regular ‘core range’, available all year round, these creative concoctions have featured prominently at festivals such as GABS and as limited run beers at the Black Hops Taprooms.

The newest limited run beer to become part of the Black Hops legacy is a dark winter Porter known as SouthPorter. The name is a nod to both the style of beer itself as well as raising a toast to the suburb of Southport, on the northern end of the Gold Coast.

It was brewed at the new Blacks Hops II brewery in Biggera Waters, in collaboration with supportive Northern Gold Coast venue owners such as Aaron Woolams, from the Last Night On Earth bar.

Says Black Hops head brewer, Michael ‘Govs’ McGovern, on the breweries first foray into brewing a Porter style beer: “We have a good track record with brewing Stouts, and with winter fast approaching, adding a Porter to our range for a short time makes a lot of sense. It’s also great to be able to give a sneaky shout-out to our Northern Gold Coast supporters.”

SouthPorter is set to be released at a launch party at Last Night On Earth on the weekend on the 15th of June. Based on previous experience, SouthPorter won’t be hanging around for long before the kegs are empty. So come along to the launch event or one of the following Southport venues from (add date the beer hits the taps), to get your hands on some:

Bringing the craft beer community of Southport together for this uniquely local concert of good beer which is only available in the namesake neighbourhood. A brown porter with soft caramel and chocolate notes and a smooth finish, and brewed in the tradition of the style’s heritage originating in Central London during the late 1700’s.

If you are interested in covering Black Hops there is more information up at our media page at https://blackhops.com.au/media