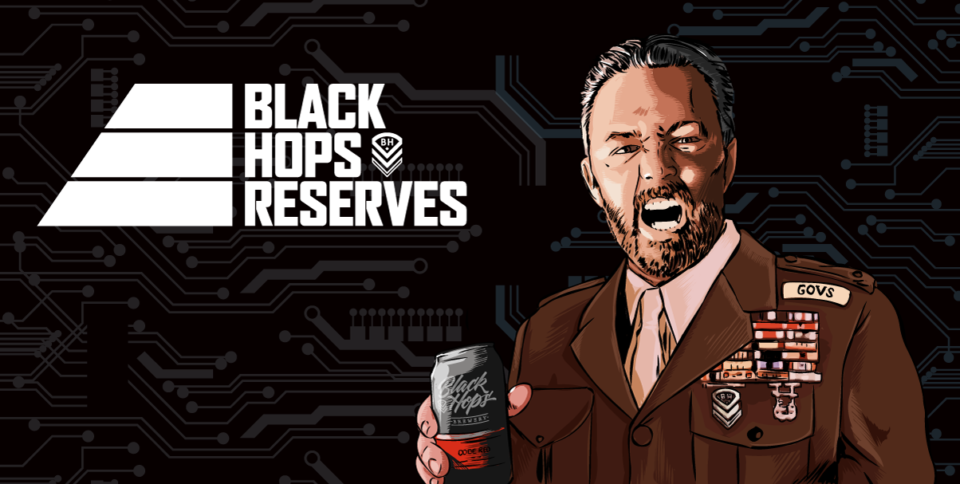 The Grand Champion round of our first ever Black Hops Reserves competition was held in February 2021, where each round champion was given the task to brew G.O.A.T. using our all grain recipe which is available here.
All 5 round champions put in a great effort and gave the judges a difficult decision in crowning the winner. The first round of judging was completed by long time Black Hops employees with a knack for beer tasting, with the final tasting and judging being concluded by Govs, Eddie and Dan.

The winner was crowned at a ceremony held at BHII, and all entrants from each round were invited along to help celebrate. It was a fun evening for all, but most of all for the winners who were as follows:

What is Black Hops Reserves

With COVID-19 keeping us bunkered down at home, we’re putting the call out for willing conscripts to join the ranks of the Black Hops Brewing Reserves. Those that enlist will form part of an elite home brewing battalion, where you’ll be equipped with all the ingredients to make your own, authentic Black Hops beer and submit it for judging by a group of high ranking officials. Those that proceed through the brewing ranks have the opportunity to be awarded the prestigious honour of Champion Medal Winner for each of our Core Range styles and aim for the ultimate accolade of the Black Hops Reserves Grand Champion.

Your Brew At Home mission, if you choose to accept it..

You can make the all grain recipe yourself or if you are local, we have just released Fresh Wort Kits with the beer brewed at Black Hops, together with all necessary ingredients to brew that month’s core range beer at your home barracks.

Once your brewing arsenal is stocked and you’ve followed our recipe and brewed your monthly Black Hops beer-bomb, register your submission entry online to download the competition form. When your beer is ready, send us a bottle to be judged by the Black Hops Tasting Panel. Be sure to consume the rest of your beer prior to its detonation date (responsibly).

The beers that are submitted for each month’s judging will be awarded either Gold, Silver, Bronze or no medal (honorary mention), based on the Black Hops true to brand guidelines.

A monthly Zoom Call-to-arms will then take place, where all gold medal winners, as well as an overall Champion Medal Winner for the monthly beer style, will be announced.

All Gold Medal winners will be awarded a special Black Hops Reserve gold pin. Eager Reservists are encouraged to go hard and try to collect pins for all six of the core range beers.

The overall Champion Medal Winner will be awarded the following honour:

At the conclusion of the monthly brew-offs, all Champion Medal Winners will report for the Grand Champion Brew-Off.

Contestants will be assigned a top-secret brewing mission. Upon completion of the final judging process, the title of Black Hops Reserves Grand Champion will be announced.

The Black Hops Reserves AGM is an exclusive event for all of those Black Hops Brewing Reserves who’ve submitted a beer for judging. The ceremony will consist of:

All entrants will be supported via the Black Hops Ambassador group on Facebook and can ask questions as they go.