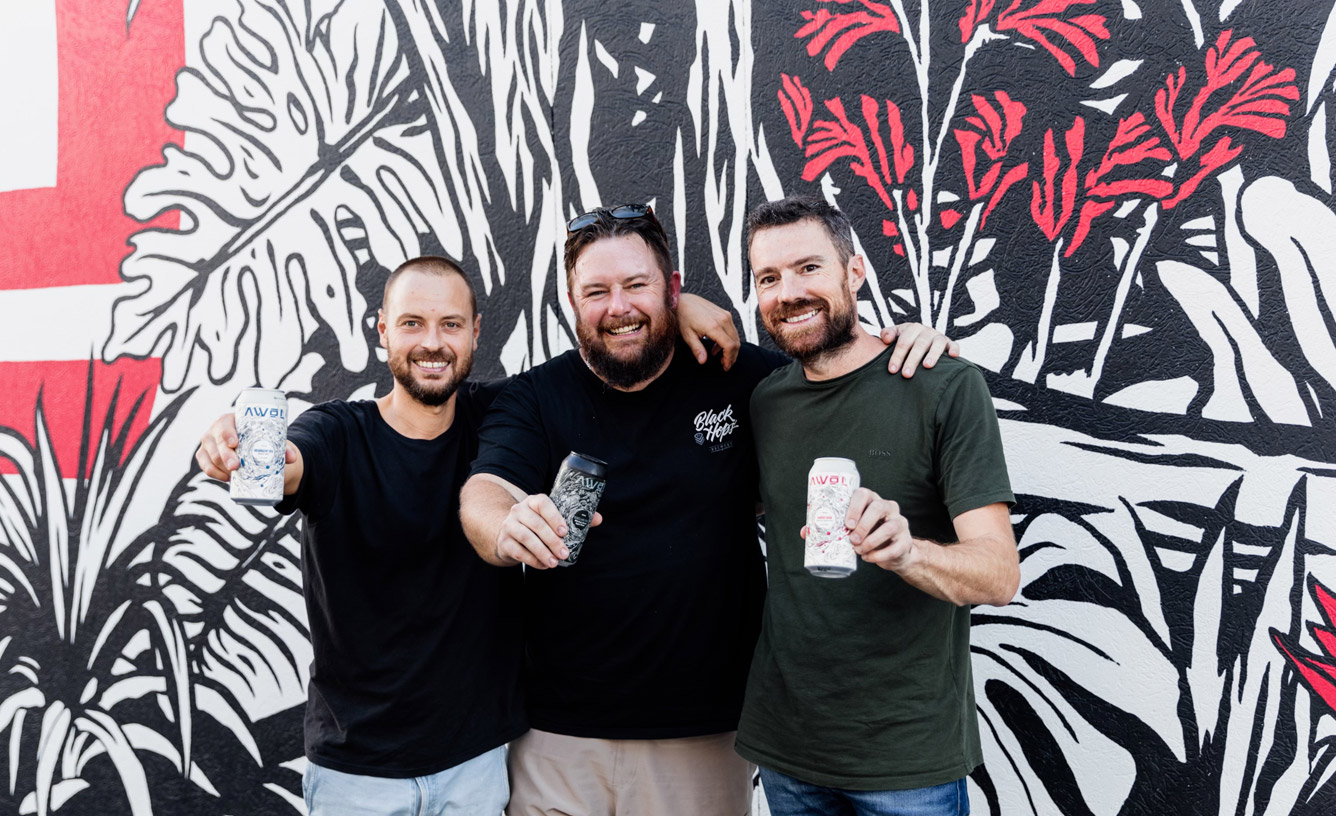 Barrel aged beers are made using an ancient brewing technique which results in the fermenting beers being transferred to oak barrels that have previously stored wine or spirits. They are then left to age for a period of time allowing the beer to absorb the flavours and aromas of the barrel. For example, oak whiskey barrels will infuse the beer with malt and oak characteristics, which typically meld beautifully with beer characteristics such as hops and citrus.

Barrel aged brewing has experienced a modern day revival as part of the ever-rising influence of the craft beer scene, with craft beer drinkers more keen than ever to savour previously unexplored flavours and beer experiences.

For Black Hops the origins of the name ‘AWOL’ is a story in itself. Back in 2018 on a trip away from the brewery, a Black Hops keg became infected in enemy (beer) lines. Upon returning to the brewery, the team tried the beer to discover it had developed into a surprisingly good tasting sour beer. Generally sour beers are cultivated in a more controlled way but in this case it was a lucky break.

The team decided to put the beer into a barrel and used it to launch their first barrel sour which they christened AWOL.

It was a single keg poured exclusively at the Black Hops taproom in Burleigh but before too long a few different versions were developed (creatively named AWOL #1, AWOL #2, AWOL #3), this time blended with fruits such as passionfruit and cherries.

Says Black Hops co-founder Eddie Oldfield on how the next phase of the project evolved; “In 2019 while on a trip to New Zealand we fell in love with the idea of a barrel-aged beer taproom. With the success of our initial AWOL beer, we were keen to explore a new line of barrel aged beers. And when the site behind the brewery became available, the stars aligned and AWOL was born.”

Work then began in earnest to bring the concept alive. The AWOL barrel aged beer taproom, situated directly behind the original Black Hops taproom and Brewery (HQ) in Burleigh Heads, was originally the site of a meat factory three decades earlier. The conversion and fit-out has been ongoing since July 2020 and for Black Hops co-founder and self confessed ‘design-tragic’ Dan Norris, the space offered an opportunity to create a unique, multi-sensory experience. Says Dan of how his design vision for the AWOL taproom evolved; “Just like the beers themselves, we were driven by the idea of melding ancient and modern by integrating the rustic elements inspired by the oak barrels together with a modern design aesthetic. It’s not your typical barrel room that’s for sure. We can’t wait to show it off!”

So far there’s over 100 white wine, red wine, gin, bourbon and whiskey barrels, each filled with beers in various stages of fermentation. Eight of these beers will be ready to savour upon launch (including some in cans and takeaways), with world renowned Belgian style Lambics and Flanders Red Ales just a few of the beers that will soon be available.

For Black Hops Brewmaster Michael ‘Govs’ McGovern, getting the chance to diversify into the ancient art of barrel aged brewing was an opportunity simply too good to pass up. Says Govs in regards to one of his favourite AWOL concoctions so far; “Haven Sour, our Hibiscus Cherry Sour, is one close to all of our hearts, having been named after the street address (Hibiscus Haven) of the AWOL taproom. It’s a blonde ale that we’ve been aging in red wine French oak foeders (large 2,000L wooden fermenters) and is infused with sour cherries and hibiscus flowers. It’s about cherry ripe now for the first tasting!”

Upon launch, Black Hops will be managing the AWOL taproom a bit differently to the way that the other three Black Hops Taprooms currently operate. Barrel aged beers are not mass produced and take a lot longer to mature until they’re ready to drink, which means there’s a lot less to go around. So in its initial phases, the AWOL taproom won’t be open five days a week, and instead will be accessible via two pre-paid tour sessions for groups of 15 on Saturday afternoons.

Tours are available to book via blackhops.com.au/shop for a month of weekends from 10 April, after which AWOL will open Fridays – Sundays to the public.

The tours will include a guided walk through and educational talk, an exclusive tasting session direct off the barrels and a beer and cheese matching session in the tasting room, with extra time allocated at the end for patrons to enjoy the space.

Follow @awolbeer for your chance to jump onboard for the tours and join Black Hops for the rest of the ride.