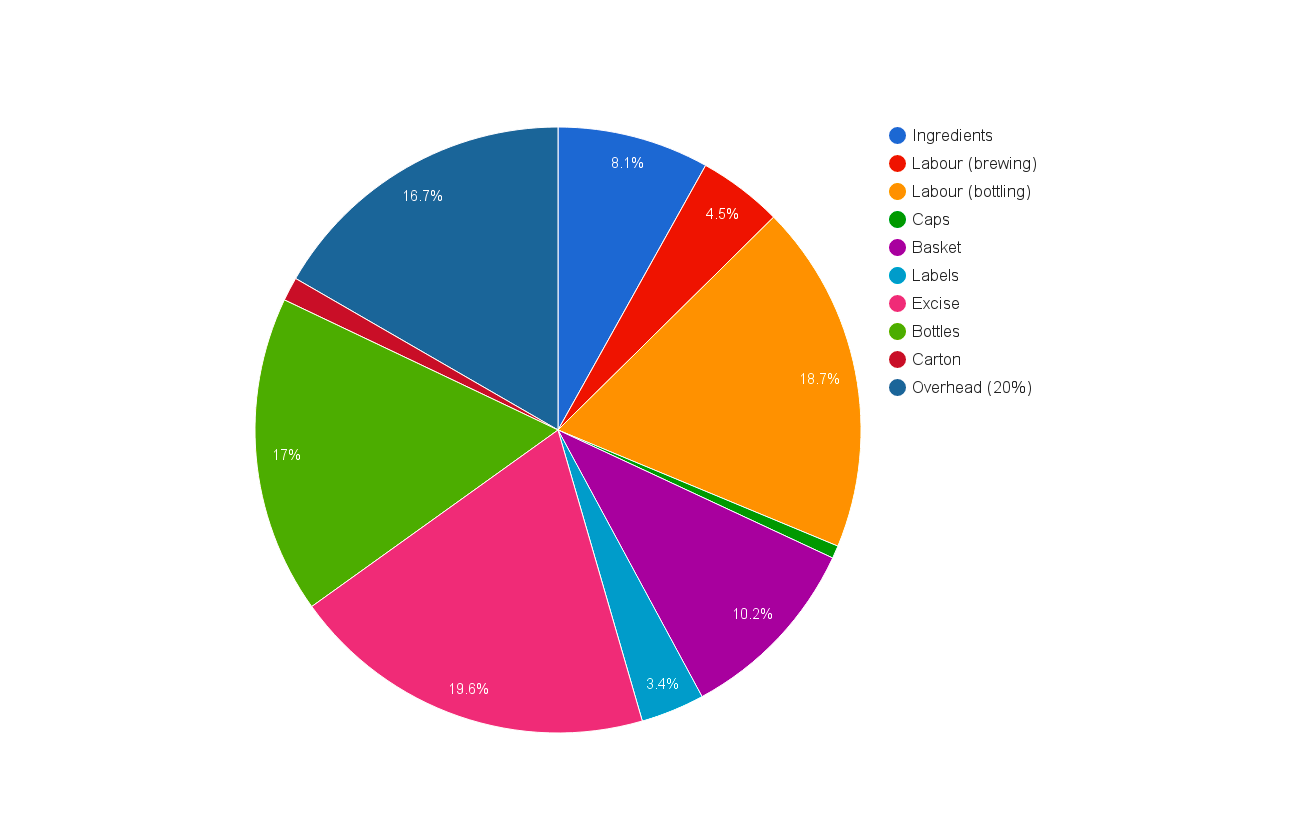 Note this post was written in November 2016 and a lot has changed. We’ve left this here for historical reasons but we would encourage you to check out this updated post for a more accurate cost based on our numbers in 2020.

Craft beer prices: How much does beer cost to make 2.0

As casual beer drinkers we often wondered what went into craft beer prices, but before we launched Black Hops we really didn’t know for sure. It’s a question we get asked often and now that we are up and running with a small scale brewery, we can finally say, well, we still don’t totally know for sure.

Beer is a scale game, which means the more you make the cheaper it gets. But as we know, there is often a quality and variety compromise that comes with mainstream, mass produced beer. If you want unique beer, brewed locally it comes at the cost associated with producing at a small scale.

Some costs, such as Excise, are unavoidable, but others go down as the process becomes more efficient. In our case, we have a very small setup:

For us, making and particularly packaging beer is expensive, but we have a lot of flexibility over what we make, hence the ‘core range’ of 9 beers.

So let’s break down these costs.

How much does beer cost?

Here’s a table where we break down estimates of the various costs that go into making our beer. 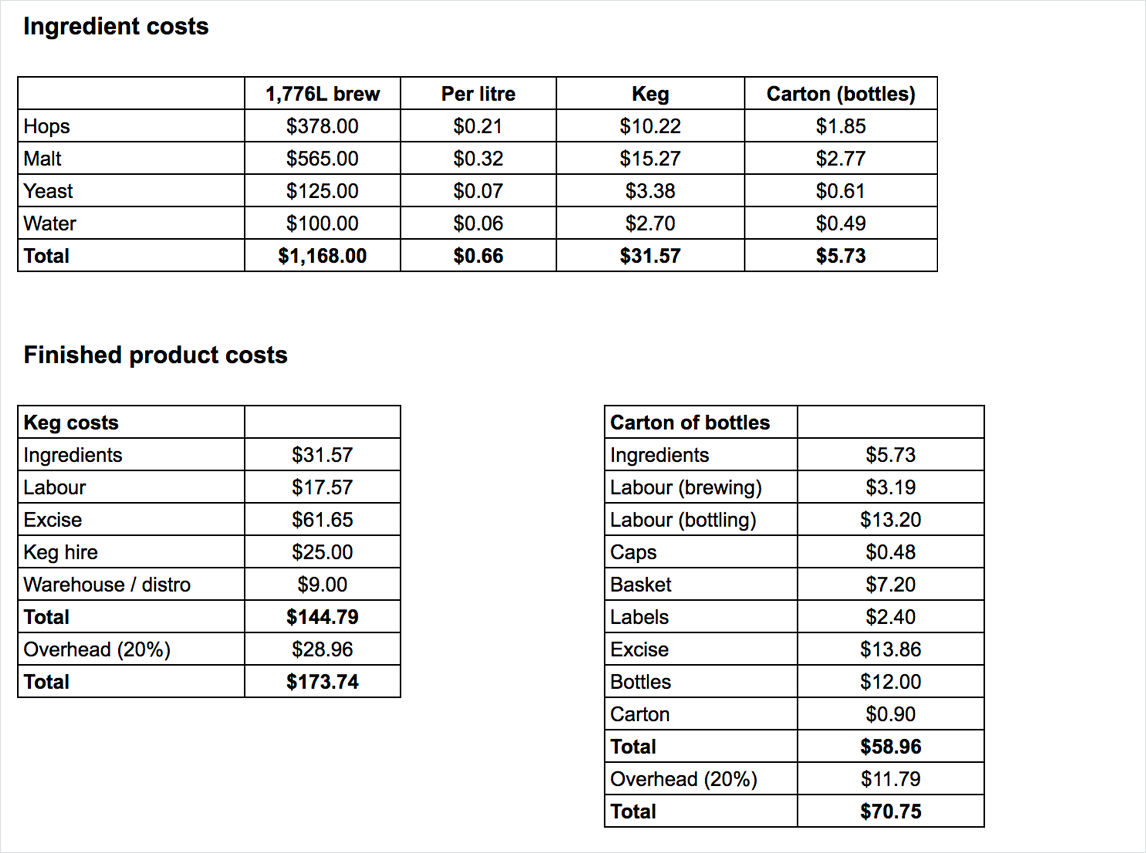 Let’s break them down by carton and keg.

Cost of a carton of beer

Here is a bit of an estimate of the costs that go into a carton of our highest selling beer, Beach House,  a 4.8% Saison. Beer costs change significantly based on the % of the beer, so any of our beers around this ABV would be similar. 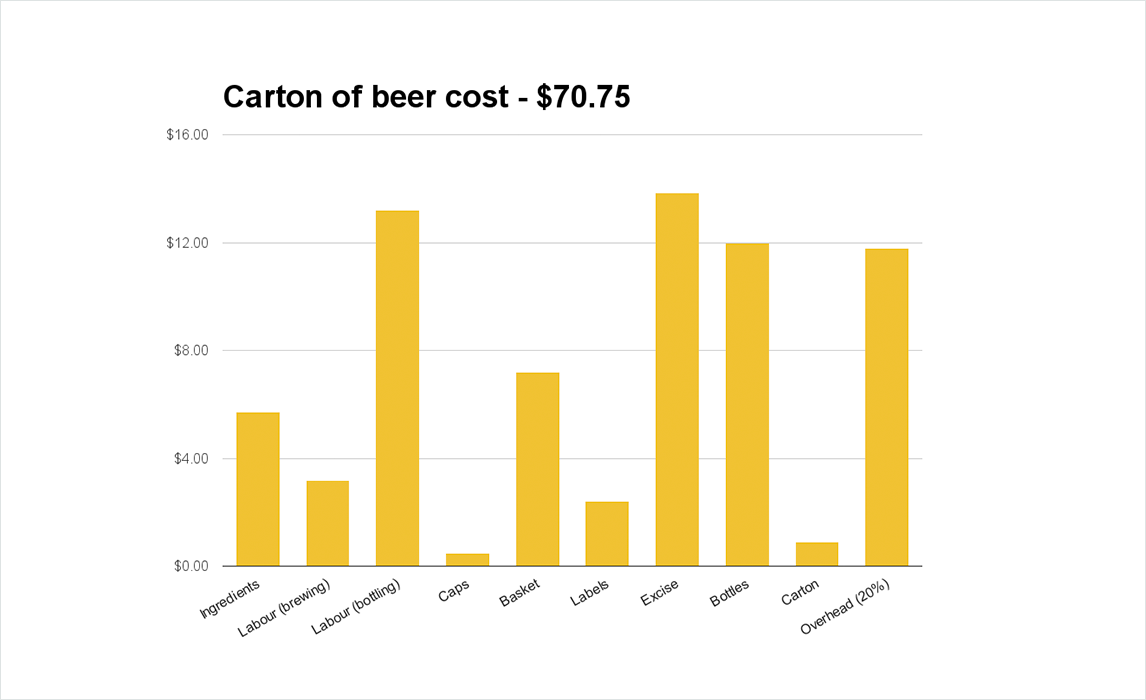 For the scale we operate at, it’s really not possible to measure absolutely everything. We are estimating around 20% for overheads, which brings the cost to $70.75 for a carton of beer. That is with zero profit.

Most small businesses wouldn’t’ survive without a profit margin of at least 30%, which takes us to $92.00. And from there we would need to consider distribution, breakage, and additional deals and bottle shop margin. By the time a bottle shop sells our beer (if we were to sell to bottle shops), they would have to do so at over $120.00 a carton before they made much money.

We currently sell beer in bottles to a few local bottle shops, but to do it in a larger scale with our current setup would be unprofitable.

Cost of a keg of beer 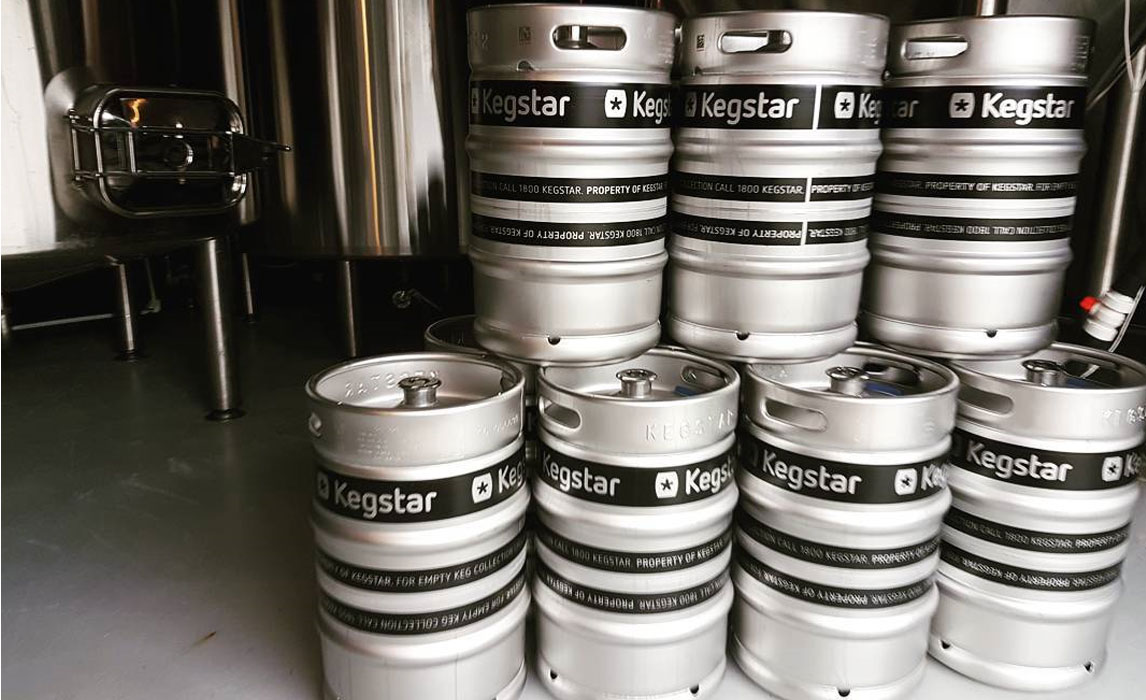 Our business is mainly selling kegs. It’s the best way to drink beer and because there is no product-specific packaging, the keg business doesn’t rely on scale quite as much.

Here’s an approximate breakdown of costs for a keg of Beach House, which comes out at around $174. 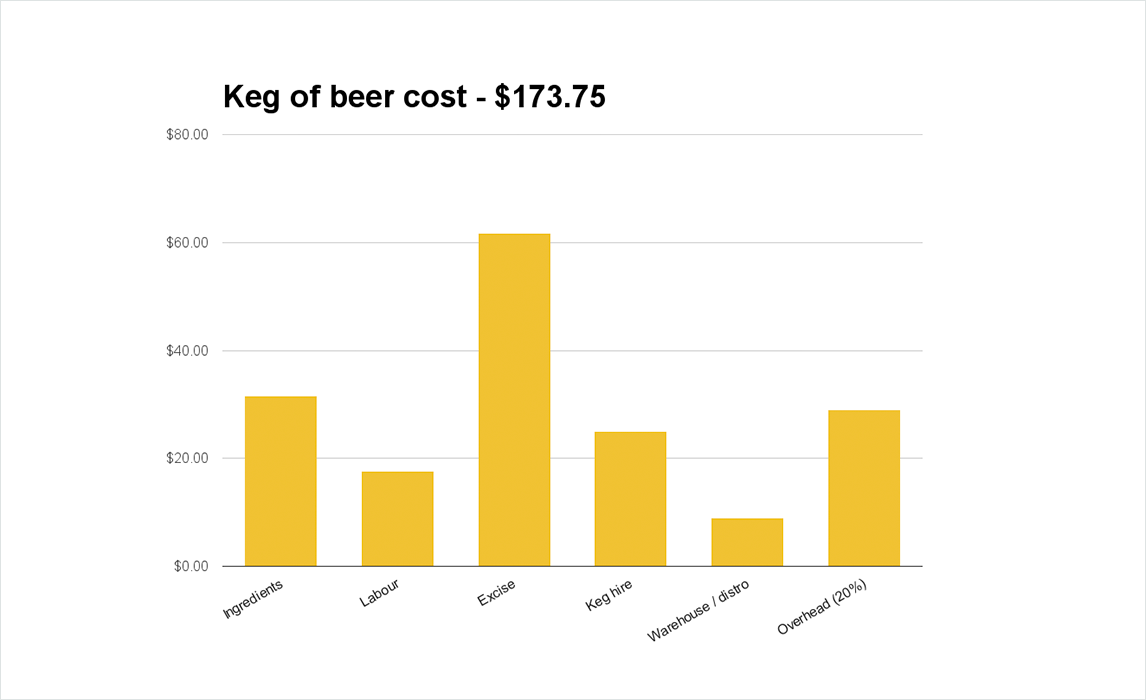 We have also assumed here that customers pay straight away and there are no costs associated with non-payers. Unfortunately, this isn’t the case, and if we were only to sell to customers who always paid their invoices immediately, we’d have hardly any customers.

The reality is, there’s probably an additional cost of about 20% that goes into the cash flow issues associated with delivering a product before you get paid for it.

Let’s look at how we get to the costs first, then delve into how breweries can make money at all with costs this high. 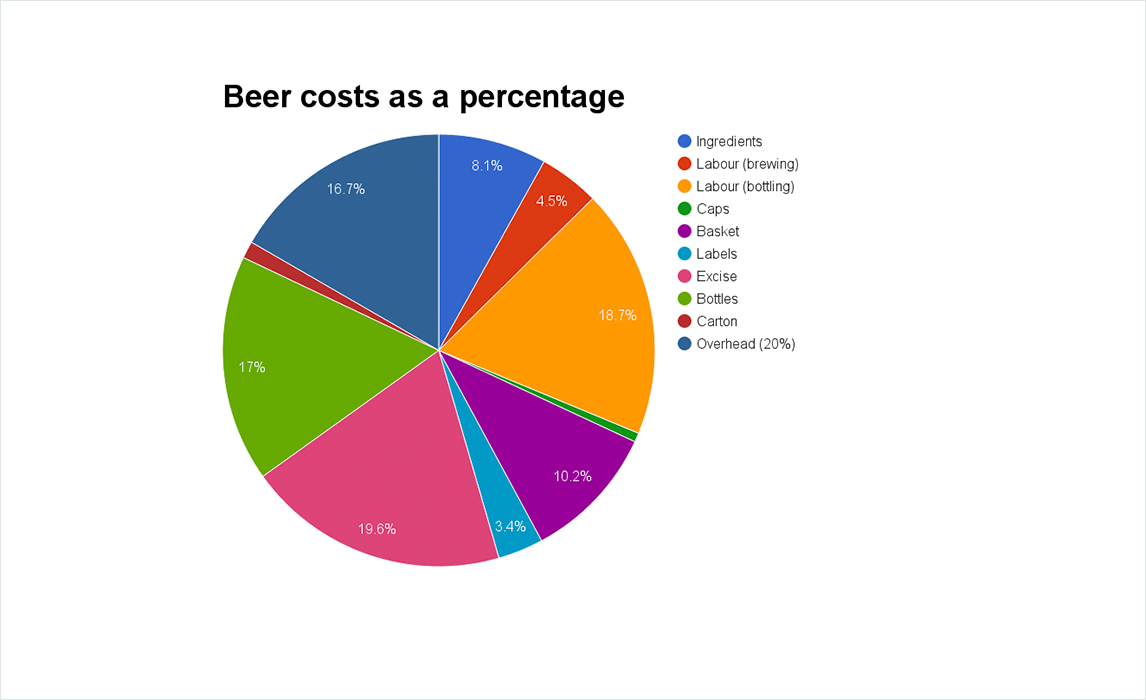 All of our beers are brewed using premium ingredients from quality suppliers, to make sure we achieve a consistent taste and quality that is reflective of our brand. We’re happy to pay more to make sure we get it right, and this plays a part in the final cost of the beer.

The costs of our ingredients are higher for a number of reasons;

This is all assuming we are still operating at a reasonably small scale. The big brewers would be massively cheaper again, given their huge buying power and much quicker brewing cycles. We need about 4 weeks to brew any of our beers, whereas the big brewers might brew 100 times as much in 10 days!

As a minimum, all of our beers will be various combinations of malt, hops, yeast and water. There will also be additional ingredients depending on the type of beer we are brewing. For example, our new Summer Hoppy Lager has oats and flaked wheat. Our Eggnog Stout has brandy, vanilla, cinnamon & nutmeg. These ingredients cost a bit. Our Pink Mist has 60 kilograms of fresh raspberries. Specialty beers get even crazier – oysters and spongecake aren’t cheap!

The types of malts, hops and yeast we use will also vary depending on the beer, along with the associated costs. The volume of ingredients we use can also be more than cheaper beers.

Here’s an example of the amount of hops and malt that goes into Beach House compared with a similar ABV lager.

All of these factors contribute to a much higher ingredient cost than a mass-produced beer. But those expenses show in the taste, and that’s the point. 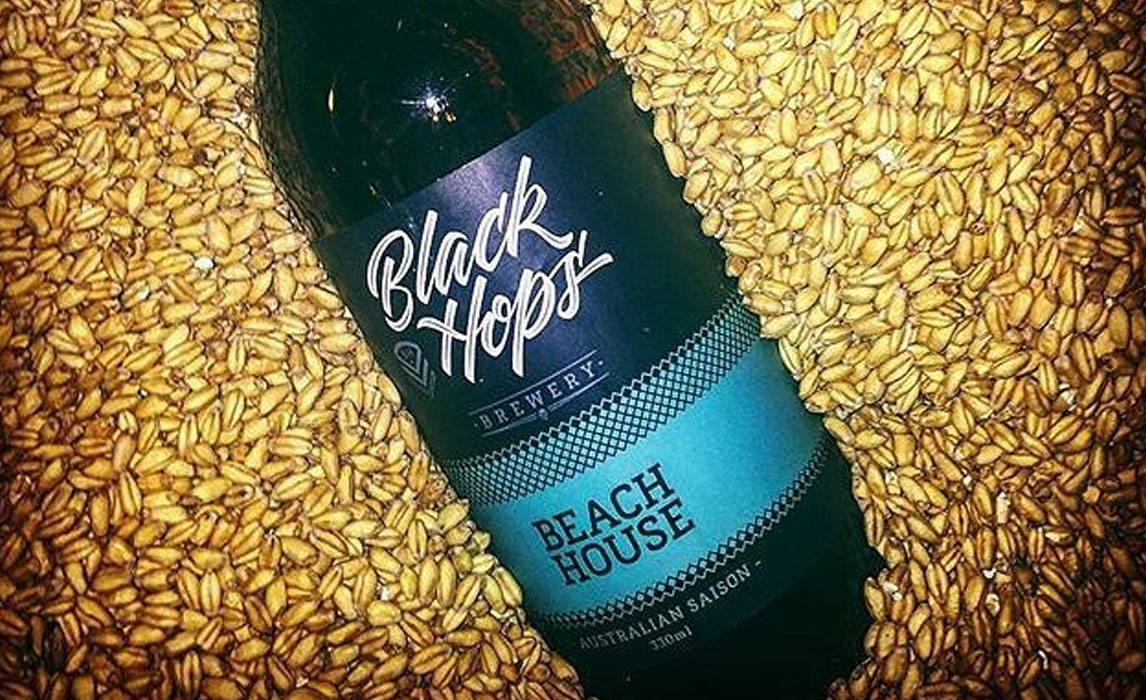 Excise duty is one of the most significant costs in producing a carton of beer in Australia. Excise duty rates in Australia are expressed per litre of alcohol. The volume of alcohol is calculated by multiplying the actual volume of product by its alcoholic strength. For beer, the first 1.15% of alcohol content is free of excise duty.

The current rates for excise duty are published by the ATO on their website, but as you can see from the keg price breakdown, it’s a huge portion of the cost. For us, it’s about one-third of the total cost of the beer. For a large scale brewery, it could be half of the cost or more. 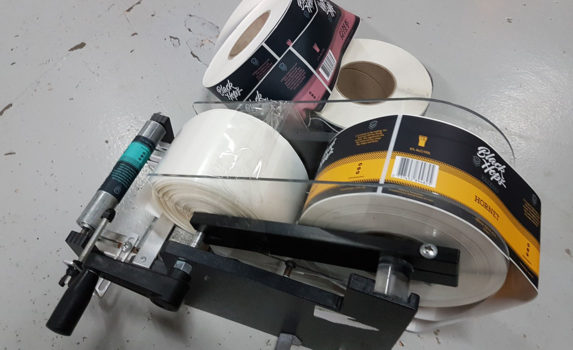 We use a company called Graphix. They do a great job, but at a small scale, labels are very expensive. When companies get into packaged product, they often do so with fewer beers in the range and at a much larger scale. The costs for a label will come down dramatically if the numbers go up.

Labels and packaging are the main reasons we don’t sell our full range into bottle shops right now. It costs too much to print 9 different labels and 4-packs, at such a small scale.

The labour we’ve included in our calculations is just Govs’ time brewing and the bottling line staff. Realistically more people are required from start to finish to get beer into bottles, but here is a bit of a breakdown of how we’ve calculated the $13.20 labour bottling costs:

We use the most basic, no branded bottle caps and on a small scale they are a reasonable cost.

Bottles are expensive at our capacity. Cans are cheaper, but require more sophisticated equipment and introduce a few more complexities, such as whether to pre-print them or use labels. We purchased a $5,000 bottling machine because it gave us the ability to do packaged product and sell it onsite from the start. It’s about the cheapest piece of equipment you can get for bottling beer, but that means the least efficient. We knew that when we bought it, without it, we wouldn’t be bottling at all.

If we were really keen to get more of our beer into shops, we would probably buy a canning line. With cans, you no longer have the 4-pack packaging costs, which saves a lot, along with a number of other benefits. 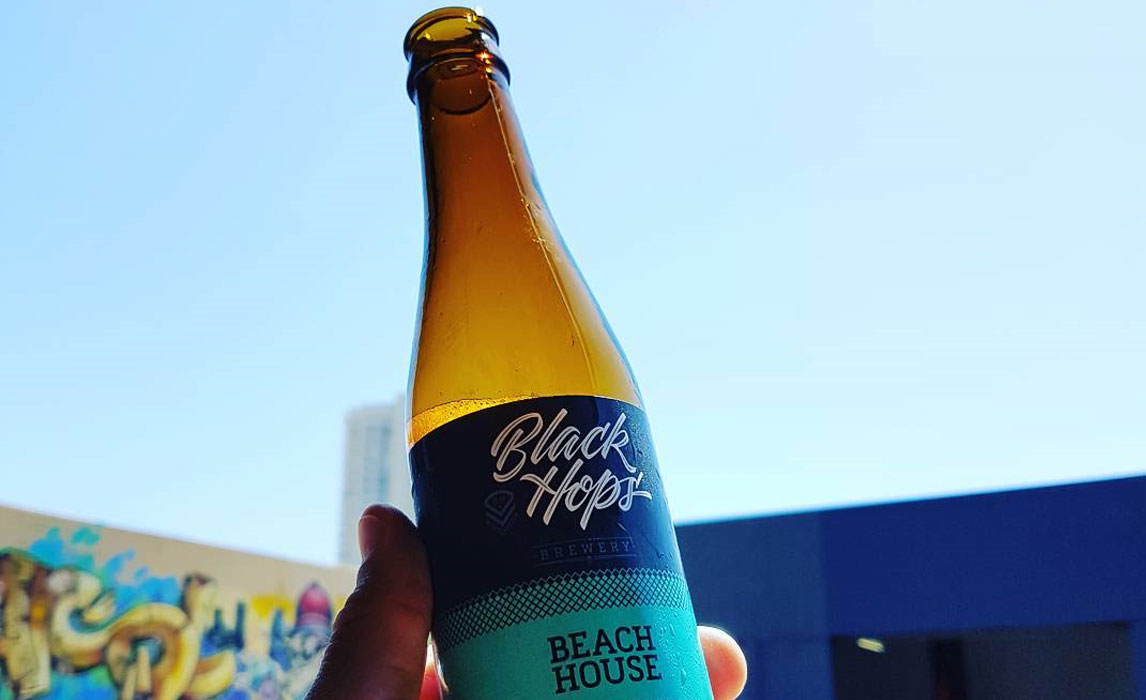 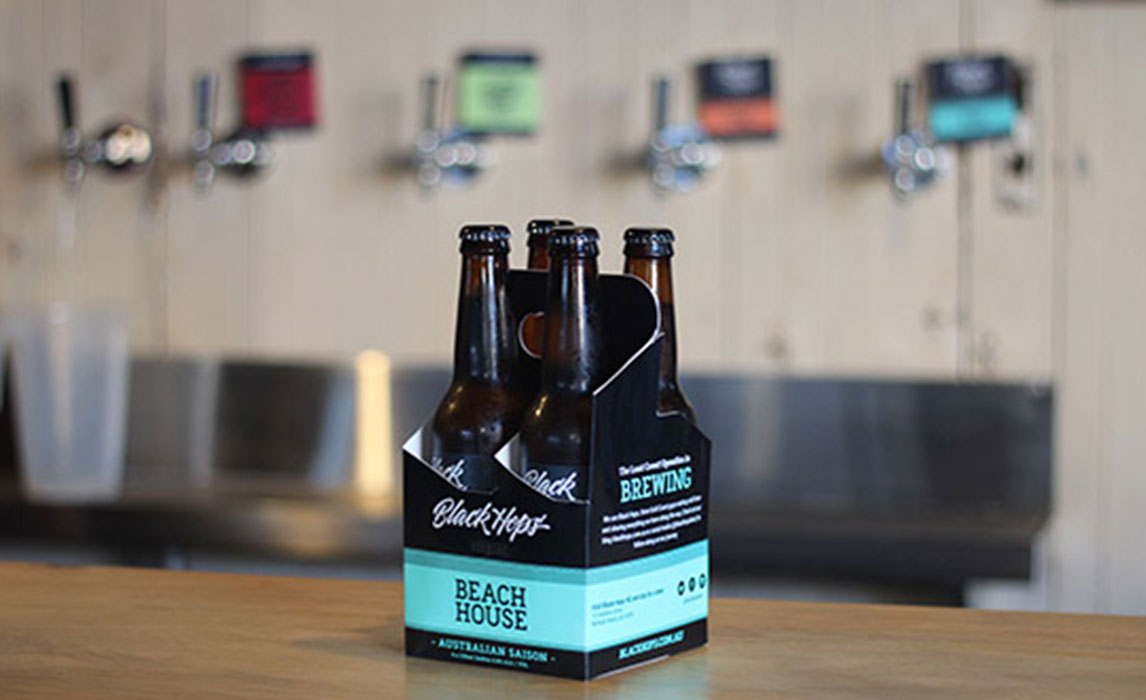 Printed 4-packs are very expensive, particularly if they are done at a small scale. We used printed 4-packs for our first run of 3,000 Beach House 4-packs and at that size, they worked out to be just over $1 per 4-pack.

Since we have up to 9 different beers available in bottles, it would end up costing us a fortune to have branded 4-packs for all of our beers. So at least for now, we’ve chosen not to sell beers in 4-packs offsite, and just use plain 4-packs for beers purchased at our brewery.

This is a significant cost and one that doesn’t exist with cans, which is a consideration if you have a lot of different types of beers like us.

We have chosen to use a generic carton because people don’t often buy our beer in cartons. This costs us about $1 per box for a plain white box with black and white logo. To do fully branded packaging the costs go up considerably. We don’t sell our beer in cartons off-site so it’s not a problem for us. Anyone who is looking to sell cartons offsite, would need to invest in packaging that stands up to the competition, who for the most part have beer-specific branding in full colour.

We did this for the Call of Duty beer and the costs were significant.

As mentioned above, the only costs we’ve looked at are ones that we incur directly in selling our beer onsite at our brewery. If we were distributing beer around Australia and selling into bottle shops the costs would be much higher. We would have to do a more detailed breakdown of costs like:

So how the do we make any money? 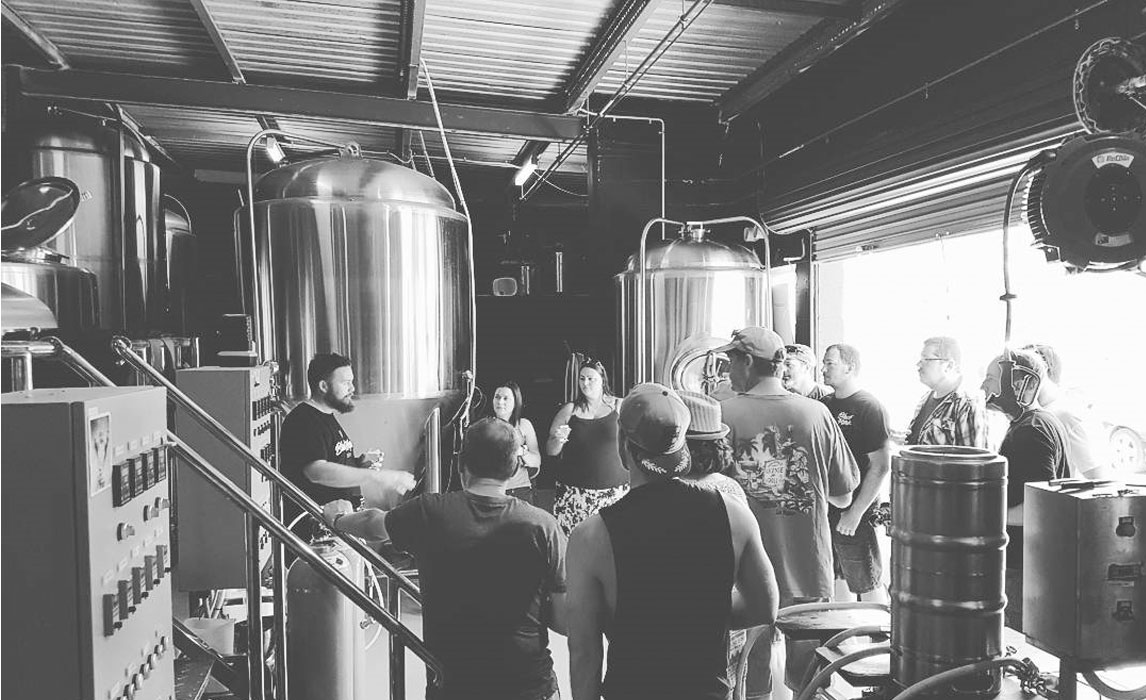 It’s pretty clear that for a brewery of our size it’s virtually impossible to make money from packaged beer sold offsite. So here are some of the things we do that actually have a reasonable margin associated with them.

We hope this helps to give some context on craft beer prices and specifically the costs associated with making a carton and keg of beer at our size. If you’d like to discuss the business of beer more, join our free Black Hops Ambassadors Facebook group.