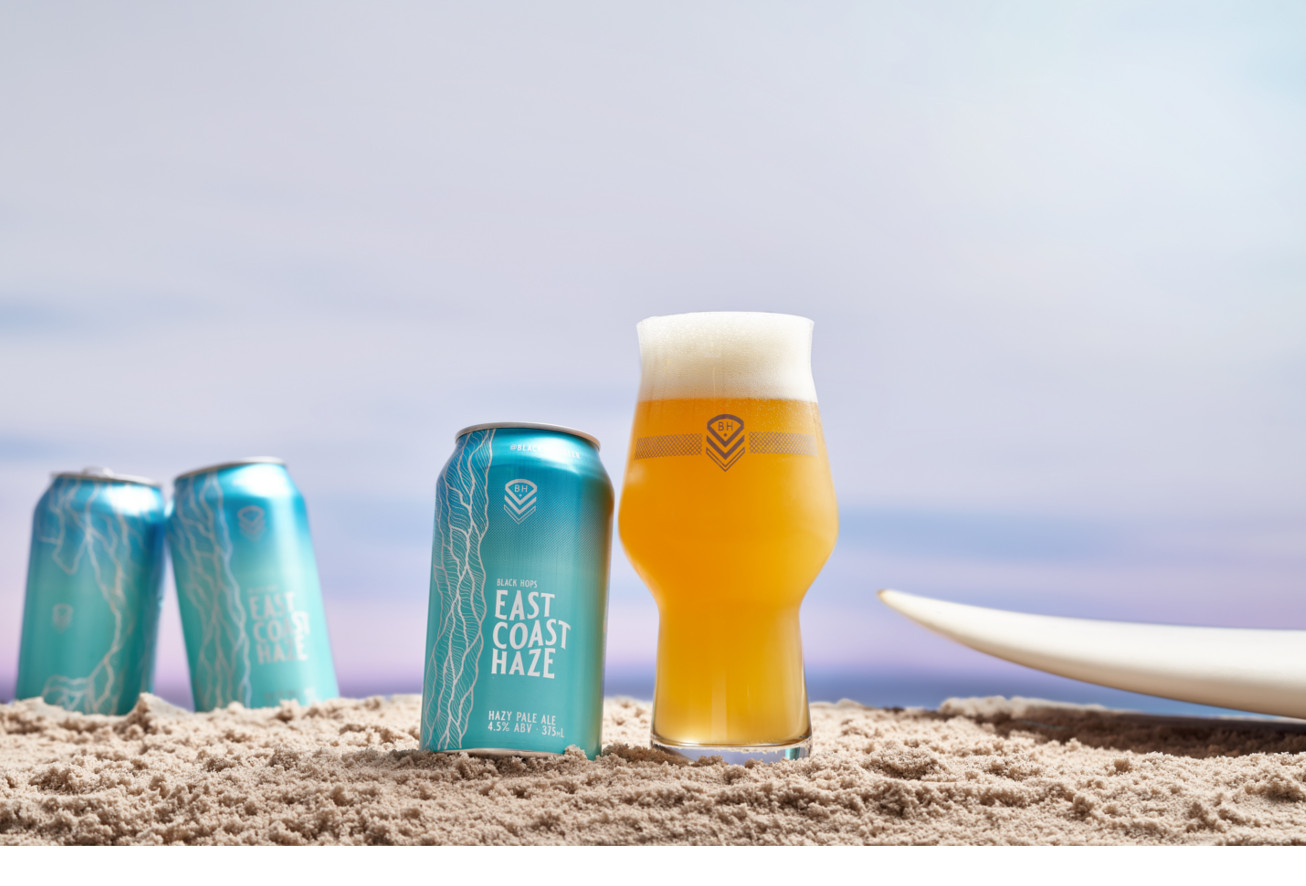 In late April we added a new beer to the Black Hops core range, an easy drinking 4.5% Hazy Pale Ale called East Coast Haze, a beer inspired by our hometown of the Gold Coast – the place we live and love.

The story behind the beer involves an interesting journey, so in this post we’ll revisit the origins of East Coast Haze and give you an insight into the thought process that went into making it our latest permanent beer.

If you’ve followed our beer journey closely you may have picked up that East Coast Haze was originally one of our 2020 limited release beers, which at that time went by the name of East Coast Low.

We originally brewed it for the 2020 Gold Coast Crafted Beer And Cider Festival, where we described it as; a wonderfully smooth Hazy Pale Ale, coming in at a sessionable 4.5%. Freshly hopped with Mosaic, Amarillo and Eclipse (an experimental new hop also known as HPA-016), ECL offers juicy flavours and aromas of stone fruit and citrus.

The concept of the beer itself actually came about as a result of one of our designers, Dave Heavyside wanting to design a beer can based on the ‘east coast low’ weather pattern, following a particularly epic surf!

Anyone who’s lived on the Queensland coast for any length of time would know about these intense low pressure systems (often the remnants of ex tropical cyclones), which tend to hover off the coastline a few times a year, creating some of the most quintessential big swells that hit our shores.

Dave messaged me and said he wanted to design a beer label called East Coast Low. I loved the concept but we didn’t really have a good beer that worked. I let it simmer for a while (we have a fair bit of back and forth on beer ideas!). After a few days we were looking for a beer to brew for the upcoming Crafted Festival.

Here’s the Slack chat where the beer became a reality.

Related: The Evolution Of Our Beer Design And Packaging Process

Related: Beer Ideas – How Beer Babies Are Made

We thought it was a great concept for a beer, befitting our hometown of the Gold Coast and its kilometres of pristine surfing beaches. Funnily enough, at the time we launched it, there actually was a tropical low off the Queensland coastline, so despite the rainy weather it generated, the keen surfers amongst us certainly raised a toast to the epic surf it produced.

Dave’s killer can design, with its swirling, satellite view style wave/wind/storm vortex, captured the essence of both the beer itself and the weather pattern after which it was named.

The Birth Of East Coast Haze

2020 was a huge year for Black Hops. For us, one beer that summed up 2020 was G.O.A.T.. It started the year as a decent chance to make our list of limited releases for the year. It ended the year as by far our best selling core range beer. G.O.A.T. isn’t a new beer, but 2020 showed us how powerful this style could be for us.

We felt the timing was right for a lower ABV hazy and we absolutely loved the East Coast Low beer.

Related: Hazy Beers And How We Brew Them At Black Hops

We felt that the concept of a beer that captured the vibe and ethos of its place of origin (our hometown of the Gold Coast), matched with a revamped look and feel, would help make it the right beer for the right time.

To be truthful we did end up going with it on a bit of a ‘gut feel’, but hey, sometimes you’ve got to back yourself – no guts no glory as they say.

What’s In A Name?

The first decision we needed to make was whether or not to keep the beer’s original name, East Coast Low.

Dave and I went back and forth a lot on this and me and Eddie and Govs also went back and forth a lot. We had fully printable versions of East Coast Low ready to go and were close to launching it under this name. I personally didn’t like the word ‘low’ for a beer like this. I thought it would get confused as a light beer and I thought the beer should be celebrating great weather not bad weather. I also wanted the word ‘haze’ in the beer, so Dave (after putting up a decent fight) started working with me on a fully revamped can.

We also debated whether to release this with the normal core range look and feel but I didn’t think a normal looking can with a different colour would really do this beer justice. We really wanted something that would make a big splash when we launched it. We were going to put a lot into this and I felt that a brand new looking can would be needed.

We went back and forth on this and in the end it was going to be on Dave to come up with an epic design that I could take back to the other founders to make sure everyone was excited to launch a whole new can into the core range. After a fair bit of work, Dave came up with another great can design for East Coast Haze. This was no small feat. Designers can easily get attached to their ideas. It wouldn’t have been easy for him to hear that I loved the design but wanted a completely different one for a beer that he effectively came up with. Luckily Dave is a very relaxed, flexible and talented guy and after a fair bit of back and forth we had a can that looked absolutely stunning. Everyone was excited once we saw what the can was going to look like!

There’s a lot to the design of the can but it’s also simple and elegant. Dave found a unique and creative way to capture the coastal vibe we were after (within the more limiting parameters of printing it directly onto the can), and with its blue and silver design (representing waves wrapping around the East Coast of Australia) he totally nailed it.

When you turn the can in the sunlight it captures the shimmery glint of sun on sea when flying over the ocean – try it the next time you’re cracking open a can of ECH in the sunshine to see the full effect! And maybe one day you’ll be able to crack an East Coast Haze on the plane flying out of the Gold Coast, that would be cool!

At the time we also gave some consideration to tinkering with the recipe. One option we considered was whether to turn East Coast Haze into a 3.5% mid-strength Hazy to replace our current mid-strength core range beer, Mid Range.

In the end we decided to leave the original beer recipe untouched. We were very happy with how the original beer tasted and customer feedback backed this up. Many Hazy beers out there tend to be up-there on the ABV scale, so a 4.5% Hazy would pitch us in the ‘easy drinking’ sweet spot between Super G.O.A.T. heavy and the less flavoursome light range.

Hopefully we went in the right direction, but this is not an exact science, so time will tell.

We also needed a new description and as always Govs delivered something special:

A cool coastal breeze in the golden sunshine, this refreshingly smooth hazy pale ale is like those perfect Aussie days. Gazing out on an aqua blue ocean as the waves greet you in the soft sand, you might find yourself lost in the haze. Freshly hopped with Mosaic, Amarillo and Eclipse to inspire your senses with notes of tropical fruit and citrus as the sun dips slowly into the sea.

How We’re Spreading The ECH Word

In addition to it’s uniquely branded can design, this time we’ve also gone all-out in showcasing East Coast Haze through a range of marketing and promotional strategies well beyond our normal reliance on organic reach.

Down the track I’ll write a detailed post about the marketing of this beer as well. But suffice to say we’ve given it a pretty good crack at launching it into a very competitive market.

We hope that you like East Coast Haze in all of its aspects, from the way that it tastes through to how we’ve presented it. This is a big year in the life cycle of Black Hops, and if we’re serious about meeting our growth targets and taking things to the next level then calculated risks need to be taken. With our pending $3 million packaging line upgrade we’re walking our talk in ramping up production, while still maintaining our high quality standards to ensure our beers are always consistent.

Looking back, when we launched Pale Ale into cans it was a brand new beer, our first into cans, and also a completely new design. It was the biggest risk product wise we’ve ever taken, and it completely changed the course of Black Hops. We hope that this time we’ve also made the right choice when it comes to East Coast Haze becoming a loved and successful beer in the Black Hops core range.

If you have any questions feel free to ask in the comments below.