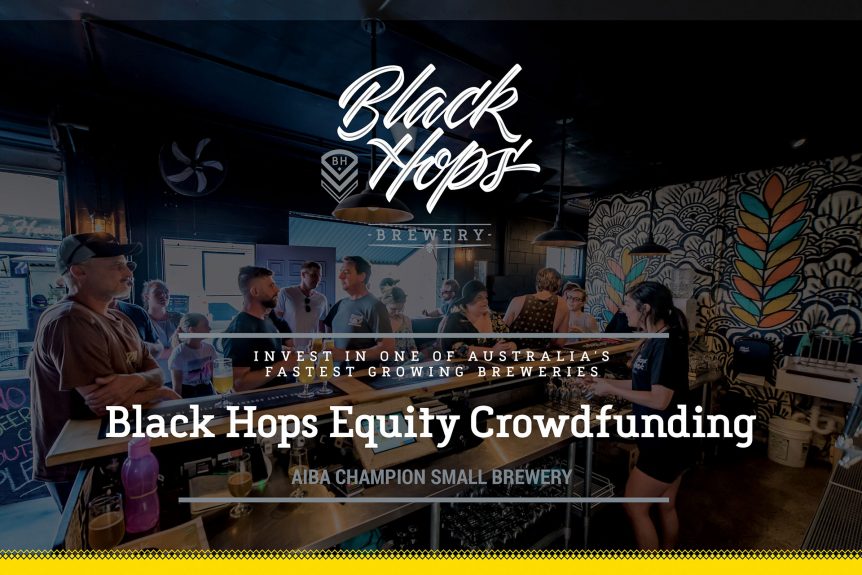 If you’ve followed our journey until now, you will know that we’ve always been open about how we are financing Black Hops. Building a brewery costs money and from early on, we’ve documented a range of options we’ve used to make it happen.

From our very first podcast where we recorded conversations with potential investors, to our successful reward-based crowdfunding raise to launch Black Hops, our $400,000 raise for the first Black Hops expansion and our most recent announcement of our equity crowdfunding raise, we’ve explored more than a few options with finance! In our Operation Brewery book we even broke down all the costs of building the brewery and how we fared against our budget.

With equity crowdfunding being introduced to Australia in the last few months, we now have another option for raising much needed funds for our expansion to a second brewery, Black Hops II.

Related: How we plan to build our second brewery on the Gold Coast.

Equity crowdfunding is something we have been discussing for a long time, because we see it as a great thing for businesses in our industry. It’s been around for a long time overseas but because it’s so new in Australia, there is still a lot for Australian investors and supporters of companies to learn about how it works.

In this article, we will provide as much info as we can on what exactly is equity crowdfunding.

Our campaign will be announced shortly, if you would like to get exclusive access before we launch it to the general public, jump on our investor list here. So far over 1,000 people have joined the list.

Please consider the offer document (when it’s available) and the general CSF risk warning before investing.

What is reward based crowdfunding?

In reward-based crowdfunding, people back your campaign with a monetary donation and receive something in return, usually in the form of a gift. It’s almost like pre-selling something. It’s a one off transaction between the campaign backer and the company they are supporting.

Back in 2015, Dan, Eddie and Govs used this traditional form of crowdfunding via the Pozible platform, to help us raise some of the necessary capital to build the original Black Hops Brewery. At the time we were the first brewery in Australia to use a crowdfunding campaign to launch a brewery. We hit our $10,000 target in the first day and ultimately raised just under $18,000. We gave our backers rewards such as beer (surprise surprise!), books and shirts. The campaign backer shirts were called ‘OG’ shirts and were exclusive. If you see someone wearing a shirt that says ‘Black Hops OG’ they are an original Black Hops crowdfunding backer from late 2015 / early 2016! We still see them regularly in the HQ taproom.

We talked about the crowdfunding campaign in detail in our Operation Brewery book and the following articles:

Reward-based crowdfunding was great for us and it enabled us to get the final funds needed to open our brewery. However there are some downsides for a business like ours. Fulfilling rewards can be expensive and time consuming. It’s more of a pre-sale than an investment raise. There’s also a financial limit to how much someone will put in for products and merch.

For a larger financial raise, equity crowdfunding offers something a lot more compelling. And for us, being right in the middle of building a second brewery it’s the option we’ve decided to go with to help us get the final funds to make it happen.

What exactly is Equity Crowdfunding?

Equity crowdfunding is different to reward-based crowdfunding in that what you are selling is primarily equity ownership in the company. Some campaigns will also bring rewards and perks into it, but the main idea is it’s a way to invest a small amount of money to receive a small amount of ownership. Before equity crowdfunding laws, companies had to raise money, almost in secrecy from family / friends or accredited investors under strict ASIC guidelines that regulated things like who could invest, how many people could invest and how you could market the offering (i.e. not much at all).

Because the investment amounts are capped and generally reasonably small, there is more leeway given to who can invest (you don’t have to be a direct friend / family member or an accredited investor) and how businesses can advertise the offer (they can promote it fully to the public).

The concept has been around overseas for a number of years now and as you may expect, breweries have been some of the most successful campaigns run. The most well known of which is BrewDog, the Scottish craft beer juggernaut who pioneered the idea of equity based crowdfunding for breweries with their first Equity For Punks campaign in 2009, and went on to build a company valued at over $1b.

BrewDog started with a raise of $1.26m AUD at a valuation of $42m AUD. They now have over 55,000 Equity Punks worldwide and have raised over $67m AUD through crowdfunding since 2009.

There have also been some very successful equity crowdfunding brewing campaigns in New Zealand, including Yeastie Boys and Parrot Dog, who raised over 1 million dollars in one day!

In Australia, since the laws have only just passed, there have been only a few equity crowdfunding campaigns, but the early signs are good. DC Power and Xinja both raised more than $2m in their campaigns on Equitise. Closer to home, West Winds Gin raised $932k in their campaign, and the first brewery campaign, Endeavour Brewing Co, are well on the way to hitting their minimum target as we write this. Birchal, a new platform by the people who founded Pozible have also had a number of successful campaigns including Memo Bottle ($383k) and Park ($316k).

Despite this early success, no campaign in Australia has yet hit their maximum and we think for crowdfunding to really work there needs to be an achievable end goal in mind.

Why would companies choose equity crowdfunding?

There are a lot of capital fundraising options out there and we’ve certainly looked into many of them at Black Hops. Equity Crowdfunding however is one we’ve been advocating for and interested in since the beginning. Here are some of the reasons a company might want to look at equity crowdfunding as a capital raising option:

We’ve long believed that the fundraising rules and standards in Australia needed a big overhaul and we’re excited that equity crowdfunding is finally here.

Given we have an equity crowdfunding campaign coming up, we anticipate potential backers will have a few questions. We’ve taken a look at some other past and live campaigns to gather some potential questions and we are answering them in advance below.

The word ‘Investing’ is a very broad term. It’s used to describe everything from a bank account which may give you an exact 5% return year on year indefinitely, through to owning your own house (which hopefully will go up in value), all the way through to hugely speculative pre-product startups.

Equity crowdfunding is a form of investing in companies. Investing in companies can range from the aforementioned highly speculative pre-product startup, all the way through to buying shares in The Commonwealth Bank. Investing in early companies is risky, but potentially rewarding if you get in early. As a general rule, the earlier you are to invest in a company or industry the more risk but the higher potential reward. Equity crowdfunding for the most part has been early stage companies, even at times companies who don’t yet have a product or customers. Black Hops is still a fairly early company but given we’ve had a physical brewery for 2.5 years and have been a functioning business for over 4 years, we don’t quite see ourselves in that same risk category.

Q) Can I sell my shares?

This is the most common question we’ve seen, and understandably so.

The reality is, with equity crowdfunding shares, particularly in Australia being so early, they are much easier to buy than they are to sell. This is because there isn’t much of a secondary market for crowdfunding shares. The same could be said about most early startup investments. If an investor wanted to sell they would have to find a buyer, they couldn’t just sell them at a brokerage like you can with a publicly listed company. Typically people don’t invest in new startups for a quick turnaround return. It’s more of a long term proposition. If we were to ever list on the stock exchange or sell the business for example, that’s when investors (crowdfunding or otherwise) would get a return.

Having said that, there are platforms emerging that operate as a secondary market for early stage investments and crowdfunded investments so over time it will most likely become more common for people to be buying and selling these types of shares.

But the bottom line is, this is not the type of investment you make to get a quick return, so if that’s what you’re after, equity crowdfunding may not be for you.

Q) What types of people invest in equity crowdfunding campaigns?

With traditional crowdfunding, people are typically investing to pre-purchase the rewards as well as to show support for the company. With equity crowdfunding, you do see people in that category but you also have people investing for the prospect of a higher return at a later date. Our campaign will allow investments between $50 and $10,000 for non-accredited investors and up to $50,000 for accredited investors. So we anticipate that investors will range from Taproom regulars and friends, all the way through to accredited startup investors.

Q) Who can invest?

Our users, investors, and advocates can own a part of our company in its early stage of growth. Anyone will be able to invest into our company and own shares from as little as $50. Restrictions may apply to investors wishing to invest more than $10,000, and documentation will be required. Please see Birchal’s guide here for more information.

Q) How do I actually invest?

We’ve partnered with Australia’s leading equity crowdfunding platform – Birchal. You’ll need to create an account on Birchal here to invest. We’ll send you an email with a link to access our investment page once it’s live.
We advise that you create an account with Birchal before the investment round goes live to avoid potentially missing out because you have to sign up to the platform first.

Birchal charges no fee for the transaction of making an investment and they do not charge any ongoing administration or management fee for your investment as a director-shareholder into the company.

Birchal Financial Services Pty Ltd is an Equity Crowdfunding Platform, (ABN 39 621 812 646) and is authorised and licensed by the Australian Securities and Investments Commission (AFSL 502618). The definitions of these terms are explained in the process. If you have any questions about these, please contact investors@birchal.com.

If you have any other questions feel free to ask them below. We will be announcing the launch of our campaign shortly, jump on the email list below to have the first opportunity to invest.