If you’ve been following along on the blog you’ll know we’ve been working up to our first commercial beer, the Eggnog stout. That beer will be launched this Sunday 2 November at Hoo Ha Bar. In this post I’ll wrap up everything we’ve done to get to this point and go into detail about how to make commercial beer.

Here’s a re-cap of how we got to this point:

The remainder of this post, I’ll cover the brewing of our first commercial beer, the Eggnog stout.

We went into some detail around the planning of the beer in this post. However there is a LOT that has to happen between planning a beer and the brew day. Here is a summary.

All in all it was quite a lot of thinking, talking and emailing prior to getting started.

We decided to do the yeast preparation ourselves. It was a big decision because it meant that the risk for the brew fell more back on us if it didn’t work out. But this is what Govs was most comfortable with so we went about getting the yeast ready a week before brew day.

Here’s a little video Govs put together for me and Ed about his process. By the end we had 40L of yeast ready to go on brew day.

We didn’t have a microscope so we couldn’t take a yeast count on the day. However we’ve since bought one so that won’t be a problem next time. 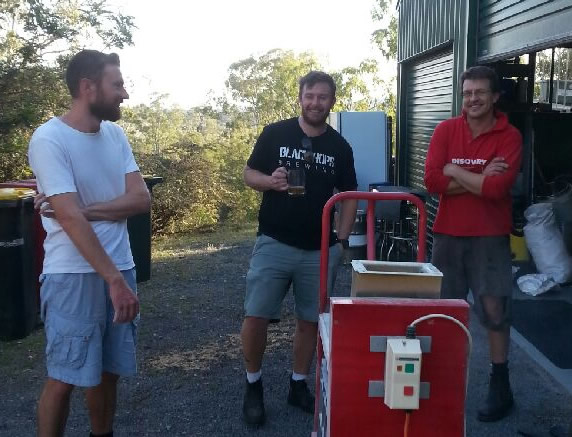 The milling went well although it took a long time. Having used much bigger mills before, it was hard to spend hours on something we knew we could have done in minutes. For that reason, next time around we may opt to mill offsite and bring the grain ourselves.

For our first brew though this was fine and there were no issues doing the milling. We were pumped to come back at 6am the next day and get brewing.

We headed up at 6am on Monday 6 October for the brew day.

Chris has a rule that if you are going to work all day you might as well pretend you are on holidays. So hawaiian shirts were compulsory.

Eggnog stout, done. Thanks for having us #beardandbrau

Lou joined us for moral support but didn’t get the memo about the shirts, or she chose to ignore it, I’m not sure. But she did bring us vegan ham and cheese sandwiches courtesy of Chris and Tanya.

Sandwiches! This pic is from the blackhops.com.au brew day. Check out the site now for a full update on how we went about making our first commercial #craftbeer

Then began the process of filling it with the pre-heated water. Here’s the water going in.

We then took it in turn to stir every 15 minutes or so.

Chris added the yeast Govs had prepared to the fermenter.

We then transferred the mash to the kettle. Here is the sparge.

We added the hops, Cascade and East Kent Goldings. You can find the full recipe in this post about the eggnog stout.

Then we emptied the spent grain using a sophisticated system of wheelie bins and a metal sign (which was very effective).

After that we repeated the whole process again to get the full 800L of beer in the fermenter.

The sun set on a full day of brewing. We were all stoked to have completed our first full brew and well and truly ready for a beer.

Everything went well on the brew day but there was still a lot of work to do between then and the launch. We had to organize the launch which we’ve been doing with Hoo Ha Bar in Brisbane. Those guys have been awesome and very flexible with our dates.

We’ve also had to go back to the brewery for a few things. 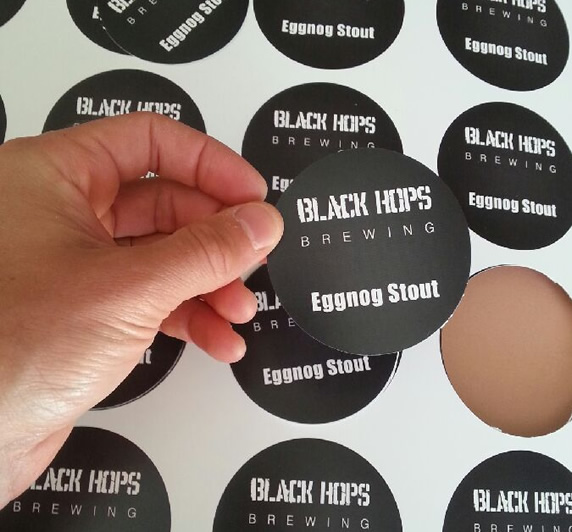 Of course someone has to buy the beer and through a combination of getting a bit of attention in the community and Eddie busily heading out to the bars in Brissie we’ve managed to sign up some amazing venues. All of these venues had agreed to take kegs before the brew was even done.

We’ve met with most of the bars guys personally, mostly Eddie and some of them have tried the bottled sample of the beer. All of these bars are in Brisbane except for our local craft beer bar down the Gold Coast.

We’ll be sure to let you know the awesome venues that tap our beer throughout November.

We had quite a bit of interest from interstate but we didn’t have enough to go round this time. If we can figure out a way to brew more next time, we may pursue the interstate venues. We’ve set up a specific list for venues to register their interest in our beer. If you are interested in being notified when we are brewing again and want to talk to us about having our beer at your venue please fill in this form:

And that just leaves our launch which is happening this Sunday 2 November at Hoo Ha Bar in Southbrank Brisbane from 3pm. Mike and the crew have been awesome, even putting this epic poster together for the launch.

The launch will be a celebration of local Queensland craft beer with 3 other breweries coming on board with new beers. Chris from Beard and Brau, Gavin from Croft Brewing and the boys from Brewtal.

If you are keen to come, you can join the event via Facebook or just rock up at 3pm on the day. We’d love to see you there.

If you have any questions about this post, please let us know in the comments. If you want to be notified when we add new articles to the blog please add your email below.